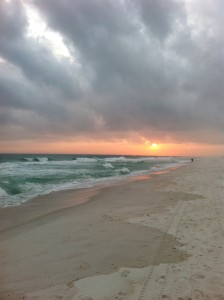 You don’t have to back away from the table, you don’t have to exercise, all you have to do is agree to appear naked on camera, “survive” 21 days in a remote location such as an uninhabited tropical island paradise, a jungle, or an African country with inhospitable terrain to city folk, fend for your own meals, water, and shelter, while trying to stay away from major predators, sun burn, sun strokes, bugs, snakes, crocs, caimans, scorpions, lions, hyenas, water-borne diseases, and other creepy crawlers. At the end of your weight loss, you will be picked up and brought back to civilization svelte, tanned or ultra-burned, smiling and dirty, a new and improved you with a higher survivability rating than when you first started. What a fantastic diet!

In the quest to shock and to titillate our bored senses, reality TV has pushed the envelope a tad further with its newest show, “Naked and Afraid” on Discovery Channel. I don’t know about you, just dreaming about being naked in public makes me wake up in a cold sweat. Being naked with a total stranger of the opposite sex in a dangerous environment for 3 weeks and in front of millions of viewers is enough to give anybody a panic attack or worse, a heart attack.

A carefully selected couple, perhaps someone with no inhibitions about nakedness and lacking the component of fear is dropped in the middle of Africa, let’s say, Tanzania, on a deserted island in the Pacific, or an island in Costa Rica or Panama. A male and a female must survive naked for 21 days, providing their own food, shelter, and water. Each “survivalist” has prior experience in outdoor challenges in the U.S., comes with one chosen implement, and a camera to film each other’s misery while the crew is at a distance, enjoying the spoils of civilization, making sure that nobody dies.

The challenges include fighting hypothermia, sun burn, proper shelter, proper nutrition, proper hydration, fighting off predators, building a fire, maintaining it, keeping warm, keeping clean, building tools to fish with, capturing animals and killing them for a protein-rich meal, sending smoke signals, and building a raft that will withstand flotation for two people in preparation for the escape to the much maligned civilization.

It does not take a brain surgeon to figure out that the naked explorers want their hour of fame, publicity, possible future gigs, and a career in television. Perhaps some honestly want to challenge themselves and their endurance, adaptability, survivability, and to earn bragging rights to the world. I am not sure how much set up and editing goes on behind the scenes, or how much of the time the two adventurers are actually totally alone in the wilderness.

Could it be an insidious attempt to indoctrinate people into the liberal mantra of “living simply,” getting us used to live with less food, houses, cars, roads, land, medicine, doctors, civilization in general, in an attempt to implement the environmental preservation Shangri-La dreamed up for decades by environmental alarmists who decry man-made bio-diversity destruction, and advocate for population reduction, one of the tenets of Agenda 21?

The reality show appears unnecessarily dangerous, nonsensical, and contrived at the same time. Take for instance the case of the couple dropped in Tanzania. He does not figure out that even the natives do not walk barefoot in areas overgrown with thorny bushes and plants. He fashions sandals out of tree bark after a long thorn embeds in the sole of his foot. Only the intervention of a doctor who stops the show, drains his severely infected wound, and treats him with antibiotics, saves him from certain death from septicemia.

Is the show meant to portray men as the weaker of the two genders when faced with unusual challenges? One very fair-skinned man suffered severe sun-burn from day one. His olive-skinned partner was able to withstand the tropical sun’s punishing rays much easier.

Do they work together in spite of the nakedness and fear to overcome the dire circumstances? Did the producers try to say that we, as a society, are too soft, fat, and civilized and would thus be unable to compete or survive in the harsh environment that native populations adapted to?

When the couple finishes the ordeal and is picked up at an agreed location marked on a map, they are weighed. Each participant loses anywhere from 18-40 pounds depending on their arrival weight and their gender. What a torturous and unhealthy way to lose weight fast! Protein deficient, dehydrated, sun-burned, infected, and bitten so bad by sand flies that one participant looked like a pin cushion with swollen feet the size of the Michelin Man, this seems to be a dangerous way to lose weight. I can only hope that no tropical flies deposited eggs under their skin. They may have some unpleasant parasites to deal with later.

I promise to stay away from chocolate and lose weight, just in case someone decides to drop me off “naked and afraid” on a tropical island paradise full of sand flies, malaria-carrying mosquitoes, dangerous reptiles, and other poisonous critters.