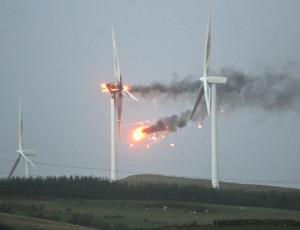 Image: Stuart McMahon
The green energy policy in the United States which requires blending gasoline with ethanol produced from corn has expanded the corn fields to the detriment of prairies. According to AP, more than 1.2 million acres of grassland were lost to the federal requirement of blending gas with 10 percent ethanol, soon to be 15 percent ethanol. These former prairies are now planted with corn and soybeans.

The unintended consequence of this green energy policy is the release of more carbon dioxide naturally locked in the soil when the virgin grasslands are plowed, the sky rocketing of corn prices, the scarcity of corn in countries where it is the main staple, food riots and famine resulting from such shortage in third world countries. Moving to 15 percent ethanol will clog and destroy car engines.

South Dakota lost “370,000 acres of grassland in addition to the 5 million acres of farmland set aside for conservation.” This is more acreage, said Brokaw and Gillum, than “Yellowstone, Everglades, and Yosemite National Parks combined that have vanished since Obama took office.”

“Scientists warned that America’s corn-for-ethanol policy would fail as an anti-global warming strategy if too many farmers plowed over virgin land.” (Chet Brokaw and Jack Gillum, November 13, 2013, AP)

These are some of the hidden costs of green energy. Thousands of birds, some protected species, even the Bald Eagle, are killed by wind turbine farms. A rare species, white-throated needletail that had not been seen in twenty-two years was tracked by bird watchers in Britain when, to their horror, the bird flew into turbine blades and was chopped up. http://www.dailymail.co.uk/news/article-2350267/Rare-bird-white-throated-needletail-killed-wind-turbine-crowd-twitchers.html

Solar panels in California either singe/fry the birds from the strong reflections or when birds dive directly into the panels thinking that they are glittering water. Lex Berko noted that many of California’s solar plants are located in the pathway of “four major north-to-south trajectories for migratory birds, called the Pacific Flyway.” www.breitbart.com/Big-Government/2013/11/12/Oops-Solar-Energy-Plants-are-Killing-Rare-birds

Powerful winds send wind turbine engines up in flames with firemen unable to put out the fires; some wind turbines are 100 meters tall. A turbine in Ardrossan, Scotland burned its engine out due to high winds, according to the Telegraph. A second turbine fell over completely. Each turbine cost 2 million pounds, approximately $3.1 million.

According to Lawrence E. Miller from Gerrardstown, WV, and engineer with over 40 years’ experience with large power train machinery associated with Navy ships, wind turbines require large amounts of electricity to operate and use electricity from the grid. This electricity use is not metered or accounted for in their output figures. The manufacturers of wind turbines such as Vestas, GE, and NEG Micon do not include electricity consumption in the specifications provided.

It is estimated that “at times a turbine consumes more than 50 percent of its rated capacity in its own operation. The 25 percent rated capacity means that a “turbine would then use (for free) twice as much electricity as it produces and sells.”

“Energy consumption in wind facilities” concludes that “industrial wind power could turn out to be a laundering scheme: ‘Dirty energy goes in, ‘clean’ energy comes out.” http://www.aweo.org/windconsumption.html

Blades must rotate even in the absence of wind otherwise they bow under the tremendous weight. In addition to bowing and warping, the gears rust in place if turbines are located near water. “The wind farm operator has to keep sensitive equipment, the drive, hubs, and rotor blades in constant motion.” (The Automatic Earth, Oct. 27, 2012)

Residents of King’s Dyke, Whittlesey, were showered for four hours with potentially deadly chunks of ice, some as long as 2 ft. from an 80 meter wind turbine nearby. (PeterboroughToday.co.uk, December 2, 2008)

A major road was blocked for 5 days by a rotor transport that crashed and overturned in Raylees, UK. Some transporters lodge at turns on narrow roads.

Because of the propensity to catch fire, discharge loose blades or broken parts of a blade, throw dangerous ice chunks at high speed, and the potential catastrophic blade failure followed by a tower collapse, these wind turbines must be placed at a safe distance from people, homes, and highways. According to a report by Windtech International in August 4, 2008, 60 percent of wind turbines were behind in maintenance.

Renewable energy is generating so many tax surcharges that Germans can no longer keep up – there is a surcharge to finance the power grids, and collateral damage charges from energy surplus or deficit, depending on the weather and the time of the day.

In winter time, when the wind stops blowing, the coal and oil power plants are fired up to provide electricity, releasing more carbon dioxide into the atmosphere, the maligned carbon dioxide that is so necessary for plant life to thrive.
Wind turbines are turned off if there is too much electricity coming from the grid but consumers have to pay for the “phantom electricity” the turbines are theoretically generating.
On numerous occasions, Germany pays fees to dump already subsidized green energy. Experts call this “negative electricity prices.”
Plants, like ArcelorMittal steel in Hamburg that use up a lot of energy, are asked to shut down production if there is an electricity shortage in order to protect the smart grid. Ordinary electricity customers “are expected to pay to compensate these businesses for lost profits.”
According to Spiegel Online International, Germans were forced to pay the highest electricity rates in Europe causing “energy poverty” among the German underprivileged when “electricity became a luxury good.” Welfare and pension checks were not adjusted to accommodate for higher prices. Over 300,000 Germans a year have their electricity cut off because they cannot afford to pay their electric bills. “Two-thirds of the price increase is due to new government fees, surcharges and taxes.” http://canadafreepress.com/index.php/article/58140
Renewable energy is the dirty and expensive little secret liberals would like to keep hidden.