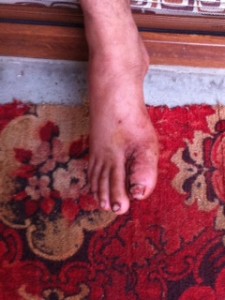 Twenty-four years after communism went underground in 1989 (and is resurfacing with a vengeance today), medical care has not improved by leaps and bounds. If you are 17 years old and injure your foot, even though you carry with you the expected envelope stuffed with cash for the inexperienced doctor, your toe will look like this after six weeks of “expert” care.

Doctors worked from 7 to 3 p.m. in the former “communist workers’ paradise” where I grew up. On weekends the hospital was pretty much empty of medical personnel, save for a few janitors and the guard at the gate. He had to make sure no dirty people compromised the sterility of the hospital. The janitors did not do much work, judging by the filth around, the stinky bathrooms, the respectable layer of dirt, and by the blood stains and other unidentifiable marks on the peeling walls and on the broken linoleum.

Doctors who were treated like gods interceding between life and certain death by neglect were paid lower than teachers but supplemented their meager income with monetary bribes brought in envelopes and with hard to find items such as soap, shampoo, meat, cigarettes, and other sundries. Such bribes bought a patient immediate attention, better care, a needed prescription, a blood test that took days instead of weeks and a chance at survival if the surgeon did not botch the operation. A doctor had a file with special clients in it, marked by alphabetized envelopes with the patient’s name and the amount of cash enclosed.

A few very good doctors were besieged by patients from a wide geographical region although it was against the law to treat them. They were to serve only the residents assigned to them by the communist party headquarters. Since quitting time was 3 p.m., some doctors continued their private practice illegally in their government assigned apartments. Everyone knew about it but the economic police did not stop it because their families often used the doctor’s services after hours as well. Even live chicken, eggs, butter, cheese, preserves, and wine were accepted as payment.

The poorly paid doctors were assigned to practice medicine in designated areas by the government, had thousands of patients, did not keep records, and their sparsely furnished waiting rooms were filled to capacity like sardines every day. Although medical care was “free” and people did not get much for free, after 3 p.m., nobody moved, everyone understood that now they had to pay to be seen.

As a child, I remember waiting with my Mom from 7 a.m. until late into the night to be seen by a doctor, holding a piece of cardboard with my assigned number on it, racked with fever, hoping to get the miracle pill that would bring my fever down.

The local pharmacy shelves were mostly empty even of that miracle drug (a bitter-tasting version of Tylenol called “piramidon”) but the doc had his own sources and we could buy it from him – the black market was thriving. Sometimes he even had antibiotics for sale. They were great because it cured the burning fire in my throat quickly. He would give me an excuse for school and I would go home and lay in bed for days, alternating between fever-induced bad dreams and reality.

Come to think of it, when we were in Italy recently, where medicine is socialized, Aspirin and Tylenol were regulated by government and could not be bought on the market without a prescription. I could not understand why since it was available on American posts and Italians were clamoring to buy it from them.

After only six years of medical school and no practical experience in hospitals or internships, all doctors were ill-prepared to care for their patients. Lucky people survived, those who were not so lucky succumbed to complications from simple procedures which the inexperienced doctors bungled. Hapless and innocent people who trusted doctors with incipient medical skills were laboratory rats.

Many family members died before their time from simple procedures such as appendicitis, tonsillectomies, hernias, thyroidectomies, and other surgeries that we take for granted here in the U.S. Raging infections would set in, some developed septicemia and gangrene from nicked organs and intestines, and patients died a painful and unnecessary death. None of the doctors were held accountable because families could not sue the government for malpractice.

The American Embassy evacuated their personnel for medical treatment to West Germany or other developed countries in the West, they were never sent to Romanian hospitals during Ceausescu’s communist era.

There are private clinics today in Romania that give stellar care and drugs are available for a fee. Capitalist free market care does work very well. But all the public hospitals and pharmacies that provide socialized medicine run out of their rationed drugs, supplies, surgeries, procedures, and tests early in the year. After that, they have no choice but to turn patients away and ration care based on age.

Dental medicine was very scary as well. Appointments for painful teeth that needed removing were made six months from the onset of an abscess or a painful cavity. Teeth were drilled, root canaled, and removed without any anesthetics in spite of the patient’s screams, pain or bloody discomfort, and the doctor used boiling, no autoclaving procedures for his instruments. He did not have an assistant or a nurse. Tooth cleaning or braces were not offered; the procedures were generally considered to damage teeth and not recommended in stomatology school.

Ambulances were a joke. Devoid of medical equipment then, they were more or less a way to transport patients from rural areas to urban areas hospitals. They did not arrive in a timely manner, offered no comfort to the patient during the very bumpy ride, and, aside from the driver who was more interested in picking up hitch-hikers to make an extra buck, there was no medical personnel on board. Things have improved under a more capitalist-based economy, ambulances have come a long way since then, but care is still sketchy and rationed. Hospitals run out of government allotted money for ambulance service relatively early in the year. After that, severe rationing occurs.

Large hospital wards were depressing “wailing rooms” where elderly were stuck to die, screaming in pain, attended by family members who brought them food, sheets, morphine (if available) purchased outside the hospital, and without any nursing care much less around the clock as is the case in the U.S. If a patient did not have a family, he/she died a painful and neglected death.

Things have not changed that much in 24 years. Recently, my aunt cared for her husband round the clock in the hospital, administering his meds, giving him shots, in a more modern version of public hospitals in 2013 Romania.

I was horrified by the lack of medical personnel, cleanliness, and otherwise professional medical care. Nothing like the first rate care I had experienced in American hospitals. And this was one of the best public hospitals in Romania in which the skilled doctors actually saved my uncle’s life following brain surgery.

I was shocked when I tried to use the only restroom on the floor that both patients and visitors used. The tub and shower had not been used in a long time judging by the patina of thick grime everywhere. An elderly female patient dressed in street clothes was washing her dirty laundry by hand in the bathroom sink. The commode stall had huge open-wide windows, visible to the floors above. The stench reminded me of our high school latrines.

It is no surprise that many doctors have migrated from Romania to work in other EU countries where socialized medicine is a little less gruesome, remuneration is more generous, rationing is enforced by law, compliance rewarded, and euthanasia is practiced legally.

Can anyone try to imagine what our brand of socialized one-payer medical system will be like in the United States in the very near future?

The often repeated rhetorical phrases, “everyone knows it’s broken,” and the Pinocchio promise, “he will fix it,” mesmerized everyone as if by magic. One shudders to think what the “fixes” will be when the health care itself was not broken and everyone had universal healthcare anyway. All they had to do is show up at an emergency room sick and they were treated.

One reader named Gene surmised Obamacare as “A one word portent for the destruction of the world’s most enviable, most successful, and most sought-after and effective health care enterprise, through nationalization; accomplished tangentially, the crippling of the national economy, and an irreparable loss of personal liberty.”

One thought on “Socialized Medicine Is Dangerous to Your Health”