The Environmental Protection Agency (EPA), created in 1970, is the primary federal agency and key player with boundless authority to develop and enforce regulations to allegedly protect human health and the environment from harm caused by pollution. EPA regulations are issued based on the following Acts enacted by Congress:
END_OF_DOCUMENT_TOKEN_TO_BE_REPLACED

The first 48 years of her life were very hard and deprived under communism. When she arrived here in 1980, she was so thin and malnourished – she looked like a skeleton, with sunken eyes and pallid skin. She never returned to Romania except for brief visits. Her life was so much easier here and my beautiful daughters became our lives and her universe.
END_OF_DOCUMENT_TOKEN_TO_BE_REPLACED

The atheist minority in this country is challenging everything the majority holds dear in their traditions, faith, and beliefs in order to satisfy their agenda of fundamentally changing America in their view of “social justice” promised by the hollow “hope and change.”

Merchants have caved in afraid to say Merry Christmas anymore. We now have Happy Holidays. Nativity scenes, Christmas trees, and decorations seem to offend liberal atheists more and more each year. Frivolous and vindictive lawsuits are filed to remove crosses that have been in place for decades, honoring those who served in the military and gave their lives to our country.
END_OF_DOCUMENT_TOKEN_TO_BE_REPLACED 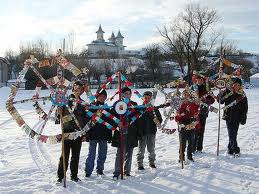 Carolers (visitromania.com)
Christmas was my Dad bringing home proudly a scraggly fir with sparse branches – fragrant with the smell of winter, tiny icicles hanging from the branches, miniature crystal daggers, melting on my mom’s well-scrubbed parquet floor. I never knew nor asked how he could afford it from his $70 a month salary that barely covered the communist subsidized rent, utilities, and food. No matter how bare the branches of my Christmas tree were, it was magical to me.
END_OF_DOCUMENT_TOKEN_TO_BE_REPLACED

Radu Mihaileanu’s 1999 award winning movie, “Train of Life,” is a metaphor for the resilience of the human spirit and the desire to be free with a decidedly anti-communist and anti-Nazi message.

Art imitates life in a series of comedic one-liners describing a very serious topic, the deportation of the Jews to the concentration camps during World War II. But it is a fairy tale with a twist. An entire shtetl (village) in Eastern Europe is self-deporting to the Promised Land, Eretz, Israel, via Ukraine – Russia – Palestine, in the year 5701 (1941) on the advice of the “crazy” village fool, Shlomo Rothschild.
END_OF_DOCUMENT_TOKEN_TO_BE_REPLACED 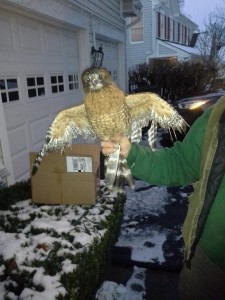 Sonny was running back and forth in the wet snow, barking furiously in the direction of the back yard fence. Scott Lingamfelter’s yellow lab was normally quiet, he rarely barked. Something must have really attracted his curiosity.
END_OF_DOCUMENT_TOKEN_TO_BE_REPLACED

The recent fast food workers strike sponsored by the Service Employees International Union (SEIU) demanded a “living wage” of $15 an hour. In progressive public policy, the “living wage is considered the minimum necessary for a worker to meet needs considered basic.” Who decides what the “basic needs” are? Are everybody’s needs the same? Why stop at $15, why not $50 an hour?
END_OF_DOCUMENT_TOKEN_TO_BE_REPLACED

Psychological projection was described by Sigmund Freud as an immature “defense mechanism in which a person unconsciously rejects his or her own unacceptable attributes by ascribing them to objects or persons in the outside world.” (Sigmund Freud, Case Histories II, p. 132)
END_OF_DOCUMENT_TOKEN_TO_BE_REPLACED

As a former college teacher, I know why idealistic young people vote with their hearts and not based on logic or with their pocketbooks. They have yet to mature into serious tax paying adults.
END_OF_DOCUMENT_TOKEN_TO_BE_REPLACED

It is not easy to find a doctor who takes Medicare in our area. When we found one that did, mom accepted him, no questions asked, based on his sweet, smiling demeanor. I was not so easily convinced. Call me from the Show Me State if you’d like.
END_OF_DOCUMENT_TOKEN_TO_BE_REPLACED