The upcoming state of the union will address global warming in the coldest day of SOU address in history. (Steven Goddard/Real Science)

The presidential memo of January 9, 2014 announced the establishment of a Quadrennial Energy Review which will concentrate on implementing a new energy policy for our country’s “infrastructure for transporting, transmitting, and delivering energy.” This review will explore “additional executive or legislative actions to address the energy challenges and opportunities facing the nation.” http://www.whitehouse.gov/the-press-office/2014/01/09/presidential-memorandum-establishing-quadrennial-energy-review

This review will seek input from “nongovernmental, environmental, faith-based, labor, and other social organizations and contributions from the academic and non-profit sectors.” Mark Pryor (D-Ark) introduced the Quadrennial Energy Review Act of 2013 but the bill had a low chance of passing even though the Council of Advisors on Science and Technology made the Quadrennial Energy Review recommendations in March 2013. Plans are underway to push and finance local “clean energy” projects around the nation. http://www.wnd.com/2014/01/another-unreported-obama-end-run-around-congress/#w82pwZEs9l9s5RLf.99

The global warming “explorers” from Australia who got stuck in miles and miles of Arctic ice and had to rescued, at great expense to many countries who used boats and helicopters powered by fossil fuels, were on a mission to capture footage and evidence of imagined melting polar ice caps.

The lives of billions of humans are rearranged for the worse at great expense and inconvenience to suit the globalist agenda of global warming in the summer and climate change agenda in the winter.

Global warming has become a very profitable business which generates billions and billions of dollars annually. The success of global “green growth” and “clean energy” plans comes after decades of brainwashing in school, with teachers and TV touting the man-made (anthropogenic) hoax and the worship of Gaia, mother Earth.

The talking heads who advocate social justice, climate justice, environmental justice, and equality, bike riding to work and school, saving animals at the expense of humans by re-wilding millions of acres of private and government land, living in 200 square ft. apartments the size of shipping containers, riding in dangerous tin cans, installing bird-chopping, health endangering wind mills, expensive solar panels who fry thousands of birds, using bio fuels with more ethanol that destroys car engines, have not given up their lavish lifestyles or their entire wealth. They still fly in jets with huge carbon “footprints,” own numerous cars, boats, and yachts, live in huge mansions on beaches that are supposed to be underwater when the ice melts.

Aaron Dykes of the ACTIVISTPOST.COM reported that in the Agenda 21 friendly Austin, Texas, in the name of Smart Growth, small high-rise apartments and condos are built, “driving is discouraged, cars are made to back-in angle park, pay to park, and even bicycles are rented out at an absurd rate – $12 for an hour, and up to $75 per day.” http://www.activistpost.com/2014/01/trendy-bicycle-rentals-cost-75day-in.html

A picture is worth a thousand words. It is interesting to see the regionalism map, proposed Emerging Megaregions for 2050 America.
http://www.america2050.org/sync/elements/america2050map.png 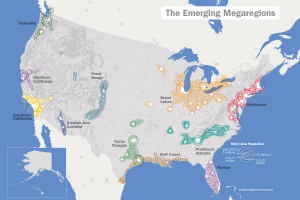 How would the state and federal government confiscate/purchase private property so quickly? One way is through eminent domain and environmental conservation. Another method is by property seizures through ObamaCare.

In more than half the states, ObamaCare comes with an expansion of Medicaid. A 1993 federal law gives the states the right to recoup the costs of Medicaid by seizing the property of Medicaid recipients who have passed away.

The Washington Post believes the enforcement of this 1993 law under ObamaCare expanded Medicaid “scary but improbable.” This option was rarely used before the Medicaid expansion and national data is scarce. However, the state of Oregon confiscated $41 million assets from 8,900 people from July 2011 to June 2013. http://www.washingtonpost.com/national/health-science/little-known-aspect-of-medicaid-now-causing-people-to-avoid-coverage/2014/01/23/deda52e2-794e-11e3-8963-b4b654bcc9b2_story.html

Some well-informed people are now afraid to sign up for ObamaCare Medicaid expansion – they want to be able to pass their private property on to their heirs.

EPA regulations, EPA is arguably one of the most powerful agencies in America today, are suffocating private citizens and industries alike, destroying jobs and the economy, changing the face of America forever in the process.

After wasting billions on “environmental justice” for minority communities in the U.S., the EPA is going to spend hundreds of thousands of dollars to help towns in Mexico like Nogales and Ensenada to “go green.” http://www.judicialwatch.org/blog/2014/01/u-s-funds-environmental-projects-in-mexico/
Everyone is familiar with the low-flow flushing commodes mandated by the EPA in order to save the planet. These commodes do not save water because users must flush several times in order to get rid of waste. Sewer pipes get clogged and homeowners must spend thousands of dollars to dig up and replace the narrow sewer pipes, clean the mess, and replace damaged/smelly/wet/mildewed furniture, walls, and carpet. Water departments spend millions each year flushing their sewer systems that also become clogged from low-flush toilets.

A high-pressure flushing system was developed to help with this problem. Unfortunately this part causes commodes to explode. According to the Consumer Product Safety Commission, Flushmate, the maker of Pressure Assist, recalled 351,000 units in the U.S. and 9,400 in Canada, made between March 2008 and June 2009. In June 2012, 2.3 million units of the same system made between October 1997 and February 2008 were recalled. Do they manufacture a high-pressure flushing Bidet? http://www.clickondetroit.com/news/michigan-company-recalls-exploding-toilets/-/1719418/24083138/-/15noetx/-/index.html

If you are familiar with the miles per gallon requirement for cars ( making them smaller, lighter, and less safe in the process), you will understand the new rating for homes that the Department of Energy is imposing in order to reduce the nation’s energy consumption.

The Home Energy Scoring Tool will be voluntary at first for homeowners looking to “renovate or remodel homes, lower utility bills, improve the comfort of their homes, or reduce energy usage.”

In time, the score derived will be a mandatory to document improvements in compliance with DOE standards when you sell your home. The DOE recommends getting the Home Energy Score “as soon as the program becomes available in your area.” The scoring program started in 2012.

To arrive at such Home Energy Score, a “qualified assessor” comes to your house and collects 40 measurements of your home’s walls, windows, cooling, heating, lighting, etc. The assessors are only available through DOE’s participating partners, state and local governments, utilities, and non-profit organizations (environmental groups).

The scoring fees range from $25-125 and there are more than 25 participating partners and 175 qualified assessors. DOE stated that 8,500 homes have been scored so far. http://www.cnsnews.com/news/article/susan-jones/doe-plugs-energy-rating-homes-similar-mpg-rating-cars#sthash.xKO9LgXV.dpuf

The software is based on “typical homeowner behavior” (who decides what is typical behavior and how?), with a 1-10 point scale accounting for zip codes assigned to over 1,000 weather stations.

No matter how many times the global warming hoax has been debunked, it remains a very profitable business for global elites aided by government fiat and crony capitalism, while the masses are harmed economically through heavier taxation, loss of property, loss of wealth, loss of freedom, and loss of mobility.