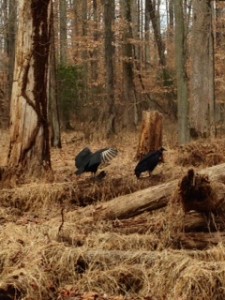 The sudden balmy day prompted him to explore the newly forged and difficult trail in the forest, leading into the marshy area along the Potomac. A creek’s tributaries flow into the river all over the densely forested and marshy banks.

He’d always wanted to venture into this area. Until recently, it was impossible to explore it without some bridges over deep marshy patches. There was so much mud, it felt like quick sand. It would have been suicidal to get trapped in those areas with no possibility of rescue. The more he would have struggled to free himself, the more he would have sunk into the mud.

As soon as his boots leave the higher elevations at the edge of the forest, he sinks into the soaked ground. He is thankful for a Gandalf-like walking stick that provides him with much- needed balance and traction. The melting snow saturated the soil. The black mud traps his feet to the ankle like a natural vise. When he walks, the slosh and the mud enveloping his rubber boots make a popping sound.

A thick carpet of dead leaves, on the boundaries of the trail, makes it possible to gain some traction. The prints of deer hooves, three inches deep, are visible here and there. They always roam in packs of at least five.

Pristine snow patches are still clinging to the ground underneath trees with peachy canopies of what appears to be dead leaves that had refused to fall and cover the ground.

As he crosses tiny tributaries, still-under-construction wooden bridges fill the air with the aroma of freshly cut planks of lumber.

The scent of rotting fallen trees and decaying moisture is overpowering. Mushrooms of various shapes, sizes, and colors grow everywhere.

An hour into his walk, he spots a flock of seven vultures feasting on the remains of a frozen dog. The carcass is half eaten and the birds of prey seem to hold their ground with menacing sounds and wind flapping. He backtracks slowly lest the vultures decide to attack him. The air has a putrid quality and he is anxious to put some distance between him and the scavengers.

Perhaps the dog escaped his owners’ care, decided to roam too far from the neighborhood and got trapped in the ice or was attacked by coyotes. Are his owners still looking for him? Maybe he was a stray dog with no home to go to and died of exposure to the recent extreme cold weather.

He trudges through mud in the opposite direction all the way to the promontory overlooking the river, not far from the railroad bridge. A freight train is whistling in the distance. The train’s loud warning whistle blares right before the bridge crossing. Not that any human or animal would be foolish enough to be caught on the train tracks on the bridge with no area to escape other than jumping to certain death into the river below.

The water level is extremely low; the flood areas are completely dry with a few patches of frozen water. The dense and strangulating water lilies have long since died. He could actually walk across the dry land. During the blizzard of 2010, the water level was much higher; the entire flood area looked like a skating rink with deep water frozen solid. Reeds were protruding from the ice like impaling bayonets.

The beaver dam is so dry, he can safely walk across the water to the other side of the forest. Empty large snail shells are littering the yellow soil. After two and a half hours of exploration, he decides to return home. He baptizes this sinewy walking path, the Trail of Seven Vultures.