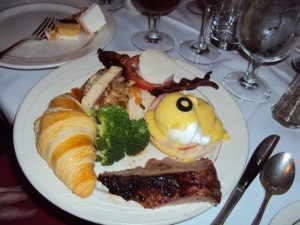 Photo: Ileana Johnson, 2014
I don’t look at food the same way most Americans do. I grew up on my grandparents’ small farm in the village. Everything we ate came from our garden and our livestock – fresh vegetables in season, canned vegetables in winter and spring, goat and cow’s milk, butter, goat cheese, eggs, smoked meat, lardy bacon, fatty sausages in natural casings, and eggs.

We ate to live; we did not live to eat. Food was for nourishment not for entertainment, gorging buffets, or for bourgeois socializing. From time to time, adults ate better meals with family and friends at weddings, baptisms, and funerals. Kids were generally not included in such occasions. They stayed home.

When I went to first grade, I moved to the city with my parents, 6 miles away. Our food then came from the benevolent government planners who made us wait every day in endless lines at the grocery store, the butcher store, the dairy store, the bakery, the greengrocer, and the farmer’s market if we could find food, if the store did not run out, if there was enough for everybody, if we had rationing coupons, and if we could afford it.

Occasionally grandpa would ride his bike to the city with a fisherman’s netting bag filled with a dozen eggs, a piece of cheese, one smoked sausage left from the pig he butchered at Christmas, and a live chicken which my Dad killed in the most gruesome way in the yard, by cutting his head off. Mom plucked the chicken after dunking it in boiling water. The poor thing was jumping in agony around the yard. I would not have eaten the chicken except I was starving.

There were restaurants in the city, patronized by the ruling elites because they were the only ones who could afford the pricey meals. Their salaries were huge compared to ours. They received special treatment and gifts of food and services in exchange for loyalty to the communist party.

Allegiance and love for family and conscience went out the window when the specter of hunger hung in the air. It was easier to snitch on your family when you got extra food each month and were allowed to shop in underground communist party stores laden with abundant supplies from the west, fresh vegetables and fruits year around, expensive wines, liqueurs, beer, juices, chocolates, oranges, bananas, and other fine things that most Americans take for granted. No EBT, SNAP, or WIC credit cards.

Someone who entered such a store explained to me that it was as if you had died and gone to food heaven, that’s how much food there was everywhere. No money was necessary. All you had to do is sign your name in a book, leave your conscience at the door, and spy on your closest relatives – each monthly report sufficed and you were fed quite well.

My first encounter with a grocery store in America kept me in awe for hours. I could not tear myself away from the shelves, bright lights, the cleanliness, the colorful and hygienic packaging, the refrigeration, and the fresh fruits and vegetables in January! I kept filling the cart with everything, and then remembered that I had a budget, and I would start over. People were laughing, could not understand where I came from, and what we ate.

American buffets are an inexplicable form of gluttony that Europeans have a hard time understanding. Is it an indulgence because food is plentiful, always available without long lines or rationing, and cheap? Why stuff yourself to the brim if you’ve never felt intense hunger pains or experienced near starvation?

As the girth of Americans is expanding, the nanny government is stepping in to regulate portion size, control the type of foods they eat, the salt and sugar intake, and mandate three “healthy” meals in school, replacing the parents as the providers and decision-makers for their children. After all, the children belong to the community, we are told, and they are no longer a parental responsibility.

As small family farms that provide wholesome food are slowly disappearing, replaced by large corporate farms, we are importing more and more food from other countries, putting our food supply in jeopardy, at the whims of exporting countries. Fruits and vegetables are imported from Guatemala, Chile, Honduras, Mexico, Columbia, and other South American markets. Even chicken, seafood, pork, and other meats come from China.

Having to go hungry is a concept that Americans are not willing to entertain. Abundance and endless supply will last forever! As long as the big and mighty government is in charge, we will never want for anything. Self-reliance is not necessary, not even for food. Few people know that grocery stores only supply their stores with food for three days.

We never had “fun” cafeteria food fights or filled the trash cans with free taxpayer-supplied food we disliked like American high school students do. That is because we did not have a cafeteria, the communist state did not feed us, food was so scarce, and we would not have turned down anything edible.

The American journalists in Sochi, accustomed to a life of plenty in our free market-based economy, experienced an unpleasant taste of a communist economy in their hotel rooms; they complained on Twitter – they wanted the comfort provided by our capitalist economy.

Perhaps this experience in Russia will change the rhetoric about the utopian communism, and the nonsensical race for “collectivism, equality, and social justice” will stop. Everything about communism was unjust – it was oppressive, unequal, and inadequate. And it was not just about the lack of food – it crushed the human spirit.

As long as there is plenty of food and no suffering from hunger, people are happy and satisfied, no matter how enslaved their existence may be. As long as there are generous Americans who go to work every day and pay taxes, there is money for welfare for those who either lost their jobs or choose to be on welfare permanently in order to find themselves, relishing in their new-found freedom from the drudgery of work. That is how government officials spin their inability to create jobs for the massively unemployed that would otherwise starve without food stamps and welfare.