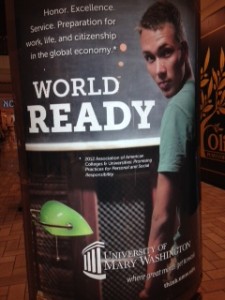 Photo: Ileana Johnson, 2014
I have asked many students over my 30 teaching years why they attended college. The answers encompassed a wide range:
– It’s a family tradition and my parents are making me
– I want to learn more about a particular subject
– I want a higher-paying job
– I want to be a doctor, a vet, an engineer, a pilot, an astronaut, an artist
– I want to do research and find a cure for cancer
– I have nothing better to do with my time and I like being a student
– I want to be perennial learner and the tuition is paid by the government
– I want to make American lives better
– I want to be the first college graduate in my family
– I don’t want to work in a blue collar job like my father
– I want to help my small hometown who needs a doctor or a vet

Not one time did I hear a student say that they are pursuing a college degree for “diversity,” “global citizenship,” and “social justice.” Not one time did any student tell me that they were studying in order to make other nations better, spread the wealth of his/her earnings to the downtrodden of the world, or rearrange America in the image of social justice, code words for communism.

I am not sure I talked to anyone who said, I really want to change this country into a communist society because I was taught by academia that Marx’s teachings would make it better. America has been so rotten for over 250 years and we must fix it.

The electronic board I saw in a large D.C. mall pictured a young man and proclaimed in bold letters, “WORLD READY. Honor. Excellence. Service. Preparation for work, life, and citizenship in the global economy.*” I asked myself, do we live in America or the globe? Shouldn’t this college prepare students for American citizenship in our economy? The asterisk explained that the University of Mary Washington subscribes to the 2012 Association of American Colleges & Universities: Promising Practices for Personal and Social Responsibility.”

As a parent and former teacher, I wanted to know what this AAC&U 2012 platform was, so I started digging. The electronic ad at the mall intrigued me and I could not get it out of my mind.

The platform (the pdf file has 112 pages) which grew from a 2006 AAC&U initiative with a grant from the Templeton Foundation, “Core Commitments: Educating Students for Personal and Social Responsibility,” emphasized “learning skills and dispositions appropriate for living and working in a diverse society, such as their ‘ability to see the world from someone else’s perspective,’ ‘tolerance of others with diverse beliefs,’ and ‘ability to work cooperatively with diverse people.’” The wording for “Core Commitments” in higher education sounded eerily similar to some of the wording in Common Core Standards for elementary and high school education.

The problem with “diverse” and “diversity” is that it is not a civic strength despite liberal promotion of multiculturalism, “multicultural festivals,” and political speeches about multiculturalism that present America as stronger because of diversity. Europeans have already admitted publicly through Angela Merkel and Nicolas Sarkozy that multiculturalism has failed miserably in Europe.

Harvard political scientist Robert Putnam found out by interviewing 30,000 people across America that the more diverse a community, the fewer people vote and volunteer, the less they give to charity, and the less they work on community projects. Putnam’s study, the largest on civic involvement in America, found that almost all measures of civic participation are lower in the more diverse settings. (The Downside of Diversity – The Boston Globe, August 2007)

Max Fisher explained that studies also show that diversity tends to correlate with low Gross Domestic Product (GDP) and conflict. The African continent tends to be the most diverse and with lower GDP.

– Strong work ethic
– Personal relationships and academic integrity
– Contributing to a larger community
– Taking seriously the perspectives of others
– Developing competence in ethical and moral reasoning and action
https://aacu.org/core_commitments/…/promising_practices_rc2012.pdf

The five Core Commitments “capacities” contain elements of indoctrination as well as elements of parental guidance that should have been instilled into their children long before they made it to college. Taking over the parental role and reshaping their children’s view of the world smacks of indoctrination. What kind of action are our students supposed to take? Do these five “core capacities” and especially the development of “competence in ethical and moral reasoning and action” reflect our American values or are they reflecting the values of a global entity that is pushing global citizenship?

Americans are not responsible for the outcomes and lives of those around the globe. Americans already engage in volunteerism and service, they do not need mandated curricula from an institution of higher learning.

Americans are already one the most tolerant cultures when it comes to racial and ethnic diversity. As research shows, diversity makes our civic societal fabric weaker, not stronger.
Why would colleges then mandate preparation of our American students for global citizenship, should colleges not prepare students for American citizenship?