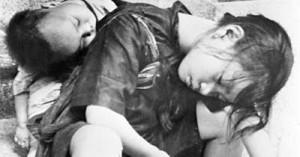 I remember the story of the Uruguayan air force flight 571 that crashed in the Andes in 1972 with 45 people on board and the 16 survivors who cannibalized the snow-preserved dead in order to survive. Humanity recoiled in horror.

During the 1932-1933 Russian engineered famine called Holomodor (extermination by hunger) in Ukraine, millions of Ukrainians died of starvation while some relatives, friends, and neighbors engaged in cannibalism to survive. Survivor Olena Goncharuk felt the terror: “We were afraid to go out in the village, because people were starving and they hunted children. My neighbor had a daughter, who disappeared. We went to her house. The head was separated from the body, and the body was cooking in the oven.”
http://www.euronews.com/2013/11/22/ukraine-s-enduring-holodomor-horror-when-millions-starved-in-the-1930s/

I wrote about the inhumanity of desperate and callous human beings in the quest for survival – it is glaring and devastating evidence why communists should never be allowed to take power again. Hundreds of thousands of Moldovans died at the hands of their Soviet Socialist tormentors who confiscated their crops by force and shipped the food to the USSR. Wheat and corn was left to rot and mold in uncovered wagons at train stations; it was done to leave farmers as poor and desperate as possible in order to better manipulate and control them. It was a Soviet state secret – nobody was allowed to write or speak about the horrors that took place in Chisinau, Orhei, Balti, Cahul, and other villages, how collectivization agents took the last drop of food and grain from the farmer’s barns, and how the children of Moldova were kidnapped, brought into homes, murdered, cooked, and eaten.
http://canadafreepress.com/index.php/article/58869

The infamous Donner Party (1846-1847) composed of 87 emigrants from Illinois was trapped en route to Sutter’s Fort (Sacramento of today) in the Sierra Nevada Mountains by heavy snow with little food, shelter, or possibility of rescue since the Mexican War was fought at the time. A year later, 46 people were finally rescued, having survived by cannibalizing the deceased. Two-thirds of the men died but two-thirds of the women and children lived. Most of the members of the Donner family did not survive. http://www.infoplease.com/spot/donner1.html

Unspeakable horror, abuses, suffering, and mass murder experienced by humans at the hand of other humans pale in comparison with the Nazi genocide, Stalin’s genocide, Pol Pot’s Khmer Rouge, and Mao’s genocide. Unfortunately, the party responsible for millions of deaths in China is still in power, having celebrated in December 2013 120 years since the birth of Mao Zedong, the man responsible for the death of millions, “arbitrary imprisonment, beatings, torture, rape, sustained harassment, seizure of property, deprivation of food and medical attention, and many other [indescribable] abuses” such as cannibalism.

According to Laogai Foundation’s Report, the Great Leap Forward and the Cultural Revolution define Mao’s legacy of terror.

“Between 1958-1962, tens of millions of people starved to death as a result of the Great Leap Forward, an attempt by Mao to overtake Britain as an economic world power in less than 15 years. During the GLF, private farming was entirely prohibited and households all over China were forced into state-operated communes. Anyone who dared challenge the practice or store their own food was violently persecuted, with many beaten to death. The impact was catastrophic. An estimated 30 to 45 million died as a direct result of this man-made disaster. Almost all of them were peasants.” The party members who had access to the confiscated food were spared. The food shortage was so severe that people ate tree bark, mud, wild vegetables, grass, frogs, snakes, animal droppings, and each other. (Cannibalism in China, Laogai Research Foundation, October 2013)

According to the Laogai Research Foundation, witnesses who managed to flee labor camps in China were forced to return for lack of food. Inmates learned to catch frogs and snakes and cook them in the chamber pots. In Anhui province there were 1,289 documented cases of cannibalism from 1959-1961. (Shusheng Yin, “The Original Record of Special Cases in Anhui Province,” Yanhuang Chunqiu 10(2009): 62-63)

Gansu Province General Office of the Communist Party Committee recorded 45 cases of cannibalism in Linxia, a city south of the capital city Lanzhou such as digging out corpses and boiling them, eating children after death, killing brother and eating him, chasing strangers in the street with scythe, and carving out bottoms and calves of the deceased.

Faced with massive cases of cannibalism, the Shandong Provincial Party Committee wrote a self-critical report that mentioned widespread starvation and cannibalism, admitting to 70 cases in Shandong Province between 1958-1960. In Laiyang County (1961) two men were found guilty of disinterring the recently buried, boiling the flesh, and selling it as beef for 5 Yuan per pound. They admitted to getting 15 pounds of flesh per corpse and that there were many on the black market doing the same thing.

Sichuan Province experienced most dead, 12 million people. In Xingjing County, 53 percent of the population died of starvation. Many witnesses testified about case after case of cannibalism. One individual, Yang Guoli was executed by firing squad for having killed children by luring them with buns and then boiling them for food.

Writer Zheng Yi detailed cases of cannibalism in Guangxi province in his book, Scarlet Memorial (1993). During the Cultural Revolution, “in some high schools, students killed their principals and then cooked and ate the bodies to celebrate a triumph over ‘counter-revolutionaries.’”
Zheng found a document, “Significant Events During the Cultural Revolution in Wuxuan County” which details that 75 people were killed and then their hearts and livers were extracted and eaten. The cannibals received minor punishments such as expulsion from the party (91 members), suspension (39 non-party members) from administrative positions, demotion, or salary reduction. Nobody was criminally prosecuted.

The Laogai Research Foundation concluded in its 81 page report drawn from official records and published in October 2013, “Cannibalism in Communist China,” that the gruesome, widespread, and unspeakable acts of cannibalism during the Cultural Revolution were “motivated not by hunger nor by psychopathic illness but by an eagerness to prove one’s loyalty to the Party and Mao.”

The report explains why the Chinese Communist Party continues to “conceal historical records, distort facts, and suppress the spread of relevant information.” Allowing this information to go public would “impugn Mao Zedong’s legacy and threaten the very legitimacy and stability of the current regime.” The communist party calls the famine caused by government policy and left-wing ideology “the three years of natural disasters,” misrepresenting cannibalism as “cases of political deconstruction” and “special cases.”

The two manufactured disasters, the Great Leap Forward and the Cultural Revolution, destroyed basic moral principles of humanity in Chinese society, causing many cannibalism cases within families – “fathers ate sons, brothers ate sisters, and husbands ate wives.” They believe that more cases will come to light and more documents will be discovered when the Communist Party will “fail.”

Man’s inhumanity to man is hard to fathom, especially when it is driven by blind ideological hatred in service to tyranny.