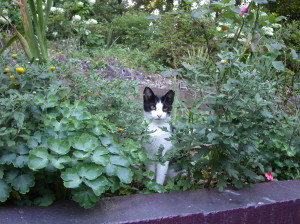 Princess, the adopted kitty
From the moment I left the house, I did not know what I was going to find on my journey. This time I left at 3 a.m. and I discovered that, even at such an early hour on Easter Sunday, the roads were not exactly clear in the suburbs of Virginia, the capital of congestion and perennially clogged highways and interstates.

On my way south, my airline ticket offered a convoluted route via the windy city. Once aboard the plane, having escaped the unnecessary frisking of the TSA, I started perusing the in-flight magazine – they’ve never disappointed me, bursting with colorful ads, magnificent stories of faraway romantic places that look so much more fascinating in glossy photographs than in reality, and the usual environmental propaganda. This time it was all about “green” coffee, sustainability, community gardens, and U.S. Airways’ one world alliance (part of the merger with American Airlines) that is supposed to compete with Delta Sky Team’s. The name “one world alliance,” meant to help “international travelers better connect with their world locations,“ gave me shivers.

An elderly gentleman seated next to me, a physician, was bemoaning the state of medicine today and how it was Mitt Romney’s fault (he said it at least three times during our incipient conversation) and how people in Chuck Grassley’s office wrote the Affordable Care Act. Not one time did he call the bill Obamacare or blamed those who passed it in the middle of the night. I was irritated and ready to do verbal battle. I don’t know how, but I am always finding myself seated on airplanes next to liberals. I can tell by the way they dress, they behave, the way they hog the arm rest, and how they invade the floor space with their bulky carry-ons and computers. Normally there is no conversation with such people but he started it.

He confirmed my suspicion that he was a Democrat. He told me that he had to stop accepting diabetic patients with Medicare because the reimbursement was under $9,000 per year and he felt like a criminal having to justify to Medicare every penny spent on diabetic supplies. As much as he wanted to help patients, he was fed up with Medicare. And of course, it was Mitt Romney’s fault.

I explained to his seemingly deaf ears that Medicare was stripped of $619 billion over a ten year period precisely to fund Obamacare. He was appalled that insurance plans were so expensive now, could not understand why, but thank God for subsidies, and was hoping that we will soon have a one payer system just like in the UK because it works so well there. He had no problem with the rest of the working country subsidizing insurance for those on welfare, illegal aliens, and Muslims or other religious groups that find insurance abhorrent but demand free healthcare.

I was listening perplexed – I did not want to insult this person I just met. I chose my words carefully, I had to bite my tongue several times, and it was very hard to listen to his outrageously ignorant claims. He became increasingly uncomfortable and, had the plane not been full, he would have changed seats gladly to get away from my logical descriptions and explanations of the disastrous Affordable Care Act that is going to destroy our stellar healthcare. We parted ways hurriedly, and I barely had enough time to hop on the next flight, the last leg of my journey.

After bumping my head because I am taller than the overhead bins on a Canada jet, I happily deplaned on the tarmac of my beloved South, crossing my fingers that my luggage had made it as well. It was a gorgeous morning, cool and not humid, early enough to have breakfast and grits.

I accepted the strange car that the rental agency had reserved for me and whispered under my breath that I hoped it won’t fall apart at the seams. Our secretary had bought a Kia years ago and it had been a lemon from day one. This one was a stylish silver grey and had Soul written all over the black interior. Peripheral visibility was poor and it had lots of blind spots. I clutched my cross and said a silent prayer before I drove off. The roads were not crowded at all, nothing like the congested roads in Virginia with the motto – Welcome to northern Virginia, there will be delays. At times, the highways were almost empty for miles. My eyes were filled with the lush green vegetation, the colorful symphony of wild spring flowers, the hilly landscape, and flocks of animals grazing peacefully in fenced pastures.

The sky was liquid sunshine blue, crisscrossed by what appeared to be airplane vapor trails that did not dissipate for hours. It was so strange, I took a few pictures. I would not have noticed them except the small airplanes making these trails were quite noisy overhead. I don’t understand why some trails dissipate immediately and others take hours.

I stopped in my former hometown to visit the house I owned for 24 years. The street was lush with blooming fuchsia and white azaleas, bathed in sunshine and happy bees. The back of my former home looked like a solid green jungle with vines completely covering the brick steps and strangling the remaining trees. Renters never take good care of someone else’s property. I could no longer see Tiger’s grave; it looked entombed in tons of overgrown weeds, unpruned bushes, and kudzu. The azaleas and rose bushes, narcissus bulbs, tulips, and daffodils had long been obstructed and covered by a green mass.

A weak meow brought a furry surprise from a bush, the black and white kitty I had rescued years ago and named Princess. She followed me down the driveway, into the street, trying to hop inside my car as I was getting ready to leave. My neighbor promised to take care of her six years ago when we moved, and he had kept his promise. She remembered me and allowed me to pick her up and shower her with hugs.

The old high school building was empty and up for sale. The local furniture store that has been in business for 50 years was closing its doors. The street I took to work every day for 20 years was the same. It took me five minutes to get to the university. The expertly-manicured lawns were green already and the old trees bursting with flowers. The giant magnolia remained untouched by violent storms. Everything was deserted, save for the gate guard. Even the cafeteria was closed. I was disappointed that I would not get to see Mama Dee, every student’s cafeteria confidant and advisor. She greeted them for breakfast and lunch every day with the same words, “How you doing boo?.” Chef Fidel’s miniature garden had been replaced by bushes and flowers.

The Tombigbee waters seemed placid. I wondered if the resident gators were still hiding in the fishing holes along the banks.

Driving to Tupelo, Elvis’ birthplace, was like putting my mind on cruise control – I knew every road, pasture, home, farm, and gas station along the way. Nothing seemed changed, time stood still. Towns lost mom and pop businesses, national chains moved in, some homes were abandoned and shuttered, but churches were full on this glorious Easter Sunday. I was back in God’s country – everything was closed except for the chain bookstore. Liberals need their place to drink coffee and read free magazines.

Okolona seemed deserted. A few cars drove by slowly. Life seemed so calm and gentle, a welcome simplicity punctuated by the buzzing of bees. I almost expected to see the roads rolled up for the day.

The Turners welcomed me into their home with open arms and hugs – I had not seen them in a year. Lois had prepared her wonderful Easter meal. Life has not slowed her down much. She is just as lively as I remember her the first day we met in 1978. Harold, our WWII hero and veteran of the Battle of the Bulge is 92 years young. He stands tall, moves with purpose and energy, and still drives his truck to the store. He helps with occasional repairs at the flower shop, getting down on his knees better than most young people.

Harold delighted us with one of his war stories. His troops were returning exhausted from overseas and stopped for the night in the Civil War Cemetery in Fredericksburg where they rolled mats and slept on the ground between graves. As a treat for dinner, Harold had prepared them five sweet potato pies with potatoes he had bought from a local farmer. Some of the soldiers were not familiar with the tasty southern dessert but enjoyed it nevertheless. I don’t think I’ll ever be able to drive to Fredericksburg without thinking of Harold’s soldiers bunking for the night in the cemetery.

Time flew by and I had to say good-bye once more. I don’t see my adopted family often anymore but they are always in my heart and prayers. Without their advice, guidance, and loving acceptance, I would have never been able to adapt to this country when I first arrived. With their loving encouragement, I became a proud American by choice.

I stopped in Tupelo for a fill-up at the same gas station on top of the hill, not far from Baskin Robbins. A young man with a toothless grin said, “You ain’t from around here.” Yes and no but I miss it dearly. It is the free and patriotic America I discovered and loved when I first arrived. It has not changed that much in this charming southern town. I did not want to tell this smiling and welcoming man that I live in a place where America has changed irreversibly – nobody speaks English that much among the tower of Babel of unassimilated immigrants. People speak a language that admires primitive third world cultures and promote Spanish and global citizenship in schools. Children learn at an early age to hate themselves for being Americans. This man would not understand why progressive Americans speak the language of socialism and communism. This world I see every day is so far removed from the South, it is an alien and anti-American world ruled by crony capitalists and progressives.

The sun was setting behind me in glorious pink, purple, and orange hues. As I drove east, I took in the landscape with the eyes of a child who discovers something cherished and I breathed the fresh air of temporary freedom before returning to the stifling and suffocating alien world of the northeast that crushes the American spirit for financial gain, power, and glory.

One thought on “Flying South for Spring”