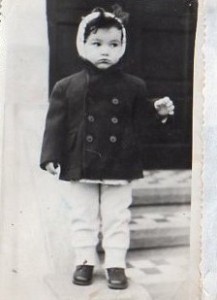 Ileana as a Child in Romania
I was one of those parents who worked two jobs her entire career to indulge my children. I wanted to make sure they never had to suffer like I did in my childhood under the oppressive communism with its equally miserable and impoverished masses. I now know that I made mistakes from time to time. I should have said no more often in my effort to make my children’s lives easier and better.

I did not parent from afar by sending in a monthly, court-ordered child support check. Nor did I disappear without a trace only to resurface when the kids became adults. I took full responsibility for my babies from the time they took their first breath into this complicated world. And it was painful to see them go into the world to seek their place in life. They were my pride and joy, the very essence of a life worth living. I felt rich beyond imagination because they were and are to this day my greatest accomplishment.

I was not the modern mom who makes children “her friends.” Children have their own friends, they need a parent. I did not allow them to spend nights in strange homes whose occupants I did not know nor vetted.

Some parents today are so inadequate and libertine, allowing drugs, alcohol, tobacco, and sex into their homes on the premise that kids are going to do it anyway, they might as well provide a clean and safe environment to engage in risky behaviors. A son who posted a message recently on Facebook, that “he had the worst life ever,” got a bizarre response from his mother, “what wrong, bro? Go listen to that song by grandmaster flash.” What can I say about such crass and irresponsible parenting skills?

I was not a helicopter parent, hovering every moment over my children’s daily activities. Neither did I physically over protect them by making them wear helmets while playing for fear of injuries. Helmets were intended for bike riding not for turning them into sissies afraid of their shadows. They skinned their knees, bruised their shins and their egos, got up, dusted themselves off after a good cry, a kiss from mom, bandages if necessary, and went outside to play again.

I never believed nor demanded that students receive awards that they did not deserve nor earned. I was not the liberal parent who wanted a plaque or a certificate of participation for their mediocre kids.

I did not force my children into activities that they were not interested in just because it was the rage and all the other parents were exhausting their untalented kids to do. My children had time to be kids and play outside, exploring nature.

I loved my children, protected them, cared for them, took them to school, and did homework every night with them patiently although I was exhausted from my two jobs. I cried myself to sleep many nights, overwhelmed by the huge responsibility of being a single parent. Stoic during the day, I never let anybody know the turmoil inside my heart and my mind.

I taught my children to be compassionate and giving with those who were less fortunate than they were. One of my daughters took that to heart so much, she always gave away all her food and personal possessions and started all over many times.

I was the parent who took children to school every morning until they were old enough to drive. Sometimes I ran late picking them up from school but the gifted teachers kept them busy. I took them to softball practice, soccer, band practice, and picked them up at 2 a.m. when returning from band trips. Nobody asked me if that was something alien to my culture. I spent days and nights in the emergency room with feverish and very sick kids, worrying and praying that they’d be healthy again.

I logged thousands of miles driving to college to attend their concerts, recitals, Christmas Madrigals, awards ceremonies, white coat ceremony, to take them to the hospital when they got pneumonia, life-threatening infections, when they wrecked cars and were suffering from whip-lash, seldom missing my day job duties.

I bought them cars when they were old enough to drive, 15 years old in Mississippi. They were good and responsible drivers. They went on vacations to the beach, on Europe trips, to the zoo, and to museums. I wanted them to have a home, food, medicine, decent and comfortable shoes on their feet, and clean and warm clothes.

I was so proud of providing a home for them even though they always complained that it was too dated. My parents lost their home when I was very young. It was confiscated by the communist regime. I never had a home after that or a room to call my own so, when I bought our house that was built in 1960, sturdy and durable, I was elated! And, as a bonus, it had a tornado shelter, something we needed every week in the tornado alley where we lived. The “dated” quality of our home gave me comfort and reassurance that older things were built to last. The happiness of home ownership was almost as respectable as paying the house off 18 years later through very hard work.

I should have never felt guilty when I could not afford the very expensive Cabbage Patch Dolls or the latest electronic gizmos, but I did. I should not have felt inadequate because my kids were left out of activities and parties in a community in which a foreign parent and grandparent who did not speak English was a source of exclusion. But my kids felt slighted and left out; they were embarrassed and I understood their resentment which I could not fix.

I should not have felt bad because my kids did not want to have birthday parties with their friends at our house because Grandma did not speak English and it made their friends uncomfortable.

I should have never tried to fix all their problems for them. At times, that was a disservice to their understanding that the world is not rolling over backwards to please them. I should have taught them more how important family is, knowing where your roots are, where you came from, and where you are going.

I should have bought them less stuff. I should have emphasized more the need for compassion and the need to share their precious time in life with those who are truly worthy of their love and care.