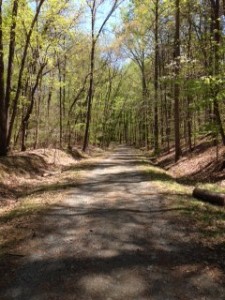 Old Mine Road
Green foliage and flowering trees have exploded virtually overnight in a symphony of pink and white. The temperatures are mild and a gentle breeze dries the morning dew. The old pyrite mine road is quiet, peaceful, and sunny. We walk slowly, taking in the natural beauty and the fresh air. Our spirits match those of the chirping birds – we are so happy to be alive, relishing in the moment, enjoying the spring that finally arrived. It has been a long winter. We shoveled a lot of global warming snow from our driveway. It is finally a pleasant day of May with a cloudless blue sky. 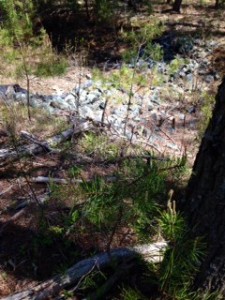 Pyrite Ore
It would be hard to tell the location of the mine shafts if it was not for the concrete blocks covered in moss. In 1995 the National Park Service and the Virginia Department of Mines, Minerals and Energy began a project to reclaim the site because the land had not healed itself after all this time. The shaft entrances had been filled and walled with concrete and 5,000 trees were planted. Virginia pines grow on the hillside where the Cabin Branch Pyrite Mine had been. Quantico Creek meanders and flows with clean gurgling waters, no longer orange or smelling like sulfur. Before reclamation, the hillside was devoid of vegetation, resembling a lunar landscape.

Miners from the nearby communities dynamited shafts 1,000 feet below the surface to extract pyrite from 1889-1919. For 30 years, pyrite ore was extracted for its sulfur which was used to make soap, fertilizer, paper, medicines, and explosives. Cracked teal colored pyrite ore is still scattered around the concrete entombed shafts. A rusty piece of metal which looked like decaying wood turned out to be an old rail road track. The pyrite ore was transported on small rail.

Mining was hard and dangerous work. In 1919 miners were paid $3.50 to $4.25 per day. Some of the pay was made in coupons which could then be spent only at the company store. When the miners asked for a 50 cent raise, the Superintendent told them, “Before I will give you another penny, I will let the shafts fill with water and the frogs jump in.” The miners did not know at the time that a cheaper, higher grade of pyrite had been discovered in Spain and the Superintendent was going to shut down the Cabin Branch Pyrite Mine along Quantico Creek and everybody would lose their jobs.

What is left of the former cabins, buildings, and stores are ruins covered by vegetation and moss. Walking through so much history is a privilege that we do not take lightly. We step carefully – we do not want to disturb any remnants of the former mine and the life that surrounded it.