Tattoos used to represent gang affiliation, prison time, or brotherhood in the military. Hollywood’s narcissistic behavior has changed that; imitation has become a misguided form of flattery.

Tattoos are a billion dollar industry. Considered now a form of self-expression, my body is my canvass, tats are not cheap. Tats are so desired that unemployed and partly-employed youth go into debt to pay for tattoos.

Tattoos and body piercings are considered a rite of passage in primitive cultures, and are more painful and more expensive to remove in western cultures. Some Christians object to tattooing because it defaces the perfect body that God has created.

On any given day, it is hard to scan any crowd without finding more and more people of all ages with visible and huge tattoos, body piercings, hooks, horns, chains, facial holes, gauged piercings, and other forms of body enhancement. There has been an explosion of young people covering their arms, their legs, their backs, necks, faces, and hands with colorful tattoos and body piercings in painful places.

A few tats are beautiful, masterfully done by skilled artists, some are ugly caricatures or stretched blotches of black ink, others picture words in foreign scripts the wearer does not understand, some represent kinship or brotherhood with an organization, a few make delicate or indelicate fashion statements, some are obscene, others represent prison time, the number of people murdered and gang affiliation, and others pay homage to a place, a person, a special date, a life-altering event, or a decision made while inebriated. No matter what the reason, tattoos become an indelible part of how that person is perceived for a lifetime regardless of their good, imperfect, or bad character.

Pirates had only one ear pierced because they believed it improved their visual acuity.

Holocaust victims at Auschwitz had numbers tattooed on their forearms by their jailers and torturers, a vivid expression of the utter brutality of Nazism and its attempt to dehumanize Jewish people.

When I first saw Otzi, the Iceman, the well-preserved mummy of a man who lived about 3300 B.C., in Bolzano, Italy, I focused on many details besides his belongings. Discovered in 1991 on the Austrian-Italian border between Bolzano and Innsbruck, Otzi had 57 tattoos. Scientists revealed that some tats were located near modern acupuncture points and they may have treated his degenerative arthritis. If that is indeed true, tattooing for medicinal purposes, a form of rudimentary acupuncture, occurred way before acupuncture was known to be in use in China around 1000 B.C.

“Otzi had several carbon tattoos including groups of short, parallel, vertical lines to both sides of the lumbar spine, a cruciform mark behind the right knee, and various marks around both ankles.” http://www.crystalinks.com/otzi.html

Two mummies, a man and his wife, from 2,500 years ago remained frozen in Pazyryk on the Altai steppes near the Mongolian border and western Siberia until it was found by Russian archeologist Sergei Rudenko in 1948. The man’s body was covered with tattoos, his arms, legs, and trunk – “monsters with wings and cats’ tails, lion-griffins with snakelike bodies, deer with huge antlers and eagles’ beaks.”

The Scyths (Scythians), Iranian equestrian tribes, who lived in central Asia from 7th to 3rd century B.C., were famous for their tattoos. The Greek physician Hippocrates (460-370 B.C.) wrote, “the whole mass of the Scyths, as many as are nomads, cauterize their shoulders, arms, and hands, chests, thighs, and loins, for no other purpose than to avoid weakness and flabbiness and to become energetic.”

Tattooing then was a painful status symbol for Scythians. Skilled tattooists punctured deeply into the flesh of their customers elaborate designs of real and imaginary creatures and then “filled the holes with a black liquid.”

Another Pazyryk people discovery was made in 1993 in Novosibirsk, a 25 year old blond princess preserved in the Siberian permafrost. The Ukok Princess had perfectly preserved 2,500 year old tattoos on both arms. Dr. Polosmak postulated that tattoos were a means of personal identification, status and position in society, as well as the ability for the people of the same clan to find each other in the afterlife. “The more tattoos were on the body, the longer it meant the person lived, and the higher was his position.”

Other bodies found in 1929 in the Siberian permafrost, such as that of a man, exhibit animal tattoos from head to toe: mountain sheep called argali, griffons with vulture beaks, winged snow leopards, and fish. 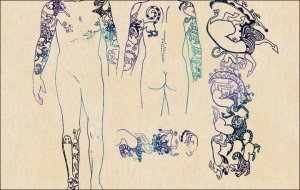 (Photo: The Siberian Times reporter, August 14, 2012)
This is the photograph reconstructing a warrior’s tattoos, warrior found on the same plateau as the Ukok Princess. The drawing of tattoos was made by Elena Shumakova of the Institute of Archeology and Ethnography, Siberian Branch of the Russian Academy of Science.

The princess’ tattoos were highly intricate and artistic, representing mythological animals and fantastical creatures: “a deer with a griffon’s beak and a Capricorn’s antlers. The antlers are decorated with the heads of griffons. And the same griffon’s head is shown on the back of the animal. The mouth of a spotted panther with a long tail is seen at the legs of the sheep. She also has a deer’s head on her wrist, with big antlers. There is a drawing on the animal’s body on the thumb on her left hand.” http://siberiantimes.com/culture/others/features/siberian-princess-reveals-her-2500-year-old-tattoos/

Tattoos are as old as our civilization and, for whatever complicated reasons humans seek and get tattoos today, they appear to be an outer expression of the inner self screaming to be noticed.