“No oppressed people will fight, and endure, as our fathers did, without the promise of something better, than a mere change of masters.”
– Abraham Lincoln, January 1861, Fragment on the Constitution and the Union 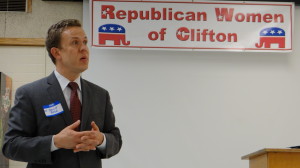 The Republican Women of Clifton hosted at their October 15, 2014 meeting Dr. David J. Bobb, President of the Bill of Rights Institute. Founded in 1999 as a 501(c) non-profit, the organization is “focused on providing educational resources on America’s Founding documents and principles for teachers and students of American History and Civics.”

With a vision to shape knowledgeable citizens with values and skills to exercise their God-given rights and responsibilities in order to maintain a free society, the Bill of Rights Institute educates young people about America’s Founders, the liberties guaranteed in our Founding documents, and how these principles are relevant today.

Dr. Bobb worked with Hillsdale College for 12 years and realized how malleable high school students are and how important it is to teach them what it means to be an American.

He compared the status quo of our country with the Office of Personnel Management, a dinosaur staffed by 600 people who bureaucratize all the paperwork necessary for federal employees to retire. The work is done entirely by hand, at great expense to the taxpayers, in windowless offices in a cave in Pennsylvania. People are crabby because they never see the sunlight. One employee finally quit, taking a job in handling explosives.

The American people are in that cave where the situation is so dark and dim, that taking a job as an explosives handler seems like a happier alternative. We are a nation “mired in debt,” and our economy is choked by a myriad of regulations under the control of progressives who are sclerotizing economic activity, in a schizophrenic state of affairs that dominates our political landscape.

Dr. Bobb’s organization is in touch with 35,000 teachers of the 120,000 teachers in the nation who teach “what used to be called Civics,” now called Social Studies, a substitution that treats the Declaration of Independence as an old artifact that has no bearing in your daily life, it is just a dusty museum piece.

The Constitution has become a “living document,” accountability is no longer present. Congress rubber stamps anything the administration throws their way. Congress has created a system of confusion and disorder, a lack of sense of reason, with a “mindboggling complexity made possible by a Constitutional illiteracy.”

The Constitution has become irrelevant, an obstacle to be overcome, an afterthought which prompted a college professor to write that there is no reason why we should abide by and be governed by a Constitution written by a bunch of dead white guys. “It is no taken seriously as a controlling document. You don’t take the structure that has been set up seriously.” That is the way academics treat it, Dr. Bobb said.

MTV reached out to young people through Rock the Vote, using rockers and rappers to promise students that, if they vote, they can vote their way into prosperity. The reality is that young people, some of whom have yet to graduate, are saddled with $1.2 trillion in college debt, no job security, just a verbal con job. Why not “Teach the Vote” and “Reason the Vote?”

Young people can sense that something is wrong but they are not blaming the administration or the progressivism that created their economic situation. They are not seeing the real culprits because they’ve been told that the deck is stacked against them since 1980 when Howard Zinn wrote his book, The People’s History of the United States, a sort of Bible for Hollywood A-listers who shamelessly quote from it to young audiences with brains full of mush. Young people are shaped to work in activism for the left, in social justice, and schools groom and churn out students for activist causes.

Dr. Bobb does not think counter-curriculum control is the solution and the most effective way to reverse the trend. Students have to learn how to think and how to become careful evaluators of history.

Outlines of history classes are huge, sometimes 94 pages long, leaving no time for George Washington, resulting in neglect of important topics. And who decides what the important topics and standards are? Progressive standards in education neglect human nature, the fact that teaching is an art.

Dr. Bobb explained that the default setting of young people is progressivism. How can we get them to think and question the way in which they are brought up, he asked. Often they don’t even realize that they are progressives. They have no sense of history. What does it mean to be human, to be good, to be great, and to really connect with other people?

The Bill of Rights Institute advocates for a non-political curriculum developed from primary source documents with professional development programs for 21,000 teachers so far from all 50 states.
© Ileana Johnson Paugh 2014

2 thoughts on “Dr. David J. Bobb Spoke to the Republican Women of Clifton”