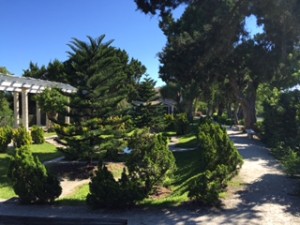 On a balmy late October day, the sunny, sparkling white beaches of Siesta Key came into view. The eight-mile long island off Sarasota with its snow-white quartz sand churned by the force of the emerald ocean into a fine powder is home to miles of canals, tropical vegetation, herons, pelicans, sea gulls, wild parrots, and bottlenose dolphins. The occasional ‘do not feed the alligators’ sign reminds mesmerized travelers that there are more creatures in the surrounding waters than the gentle dolphins and the flying fish. 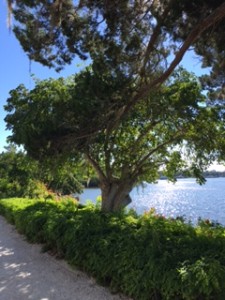 In 1907 Siesta Key, originally known as Sarasota Key, was renamed by Harry Higel and his partners in the Siesta Land Company, Captain Louis Roberts and E. M. Arbogast. Since there was only access by ferry to the island, the first bridge was built in 1917.
According to archeological discoveries, five thousand years ago people lived in the area now known as the Historic Spanish Point. These early Floridians were avid fishermen who harvested “huge quantities of seafood,” hunted deer and raccoons, lived in thatched huts, and used tools made from shell, bone, and wood. The 30-acre preserve dating from 3000 B.C. to 1000 A.D. contains a burial mound and two middens or shell mounds, excavated by the Smithsonian and archeologist Ripley Bullen looking for clues of the long-ago inhabitants and their daily lives.

Sea Shell Middens
According to museum archeologists, the middens were built by pre-Columbian people during a period called the Late Weeden Island period. Shells and refuse were layered in the sand until the land rose 18 feet above sea level, jutting into the Little Sarasota Bay. One of the shell midden sections is preserved inside a specially constructed building as evidence of Florida’s early inhabitants.
When the Europeans arrived in the 1500s, the Pensacola, the Apalachee, the Timucua, the Ais, the Tecobaga, the Calusa, the Mayaimi, the Jeaga, and the Tequeata made their home in Florida. According to historians, when native people “fell prey to disease and warfare,” Indians from Georgia and Alabama, Seminoles and Miccosukees, moved into the Florida peninsula. (Historic Spanish Point Museum Archives) 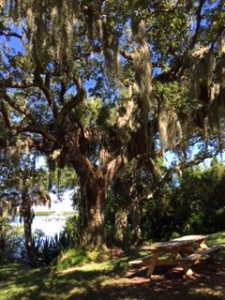 As the climate warmed, “most large Ice Age animals became extinct, people became less nomadic and the population grew. These archaic people occupied Historic Spanish Point about 4,000 years ago.” (Museum Archives)
John and Eliza Webb, with their five children, arrived here in 1867 from Utica and claimed 145 acres under the Federal Homestead Act. Because a Spanish trader had guided them to this elevated land extending into the bay, the Webbs decided to name it “Spanish Point” in his honor. For forty years the Webb family farmed 10 acres of citrus fruit. The Packing House has been restored to its pioneer era. 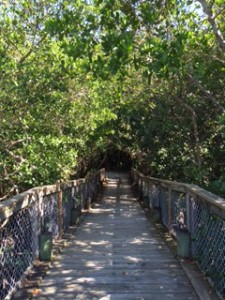 Citrus fruit was brought originally to Florida by Spanish explorers from Southeast Asia in the 16th century. Spanish missionaries gave seeds to the local Indians who planted orange trees around their communities. Groves of wild oranges were found 200 years later on hammock lands in north central Florida. D.D. Dummitt grafted sweet orange branches onto the wild trees, obtaining the now famous Indian River variety.
During its interesting history, hard freezes, pests, and disease, the citrus industry thrived and by 1980 there were more than 690,000 acres in production, making it the leading agricultural crop in Florida with “146 million boxes of oranges and fifty-five million boxes of grapefruit.” (Historic Spanish Point Museum Archives)
The proximity to so much sea water allowed growers to wash oranges covered with mold or fungus. Some fruit was perfect straight from the grove but most needed washing. The original Webb Citrus Packing House was built around 1870. 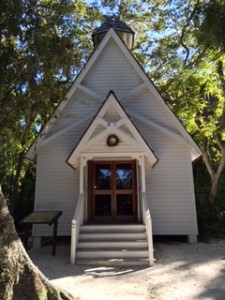 A tiny white chapel, adjacent to the pioneer cemetery where the Webb family is buried, was built in the middle of the lush tropical jungle walk. Mary’s Chapel was named after Mary Sherrill, a young woman from Kentucky suffering from tuberculosis, who had come to the Webb’s Winter Resort in 1892 in hopes that the warm Florida sun would cure her. She died five weeks later. The New England Conservatory of Music, class of 1891, donated in 1895 the church bell in memory of their former classmate and graduate.
The flora and fauna found both in temperate and tropical climates offer a unique look to the area. Hardwood forests and hammocks cover about 20 percent of Florida. On the hammock trail one can find oaks, pignut hickory, red cedar, hickory, wax myrtle with its aroma of the crushed leaf and fruit and its candle-making wax, and magnolia trees but also tropical cabbage palms and soapberry trees. On the forest floor there are shade-loving plants such as wild coffee, sea-oxeye (along the border of mangroves), saltwort, and white stopper. 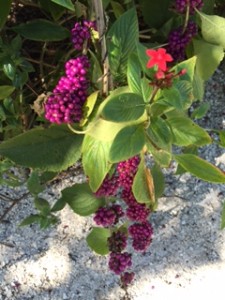 Branching trees hide insects, songbirds, owls, toads, and epiphytes, plants that grow on other plants such as the butterfly orchid, wild pine, and resurrection fern. Spanish moss, a member of the bromeliad or pineapple family, is an epiphyte that uses trees for support but draws nourishment from the air, the sun, and the rain. Spanish moss literally blankets the area, hanging like nature’s Christmas ornaments.

Red mangroves, found along the seaward edge of the coast, are one of the few trees that can grow and thrive in salt water. Their roots trap silt and eventually build up islands. The black mangroves grow further inland. The white mangroves grow on the highest elevations. The mangroves form a dense habitat that only wildlife can penetrate.

The Gumbo Limbo is a fascinating tree nicknamed the tourist tree because its red bark peels like sunburn. A large shade tree, the Gumbo Limbo sap is used as a liniment and made into varnish, while the leaves can be brewed as tea.
The bay on the east side of Siesta Key is an estuary, a place where saltwater and freshwater meet. Surrounded by mangroves that prevent shoreline erosion, the rainfall waters mixed with saltwater become a perfect nursery for marine life and wildlife. 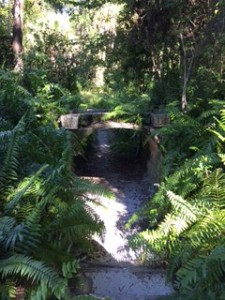 The entire 30-acre Spanish Point preserve with its fern flooded aqueduct, the mangroves, the plantation house, the packing house, the boat shed, Mary’s Church, and the cemetery are a fascinating walk into the wilderness that used to be Florida, and its rich history. The outdoor museum with the sunken gardens and the pergola are a restful escape from the noisy world into the natural world. The pathways built of seashells crunched underfoot. I got a sense of stepping on history millions of years old.
© Ileana Johnson Paugh 2014