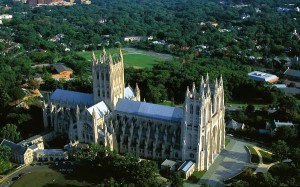 Photo courtesy of the web
On the highest point of Washington, D.C., Mount Saint Alban, a fourteen-century English Gothic style cathedral stands out – the Washington National Cathedral – with its centerpiece of the high altar, “The Majestus,” designed by sculptor Walker Hancock and carved in stone by Roger Morigi.

Also known as the Cathedral of Saint Peter and Saint Paul, the Cathedral’s construction began in 1907 and was finished and consecrated on September 29, 1990, eighty-three years after the initial laying of the foundation stone.

Designed by architects George Frederick Bodley and Henry Vaughn, and completed by architect Philip Herbert Frohman over his fifty year tenure, the cathedral was built and carved by hundreds of stone cutters, wood cutters, metal and glass artists, and other workers who built the great towers, the flying buttresses, the crypt, carved gargoyles, grotesques, pinnacles, finials, angels, and thousands of decorative details.

Some stone cutters and carvers hailed from the same part of Italy, with its rich limestone, a material used by Italian builders for their cities, cathedrals, palazzos, monuments, villas, and tombstones. The stone carvers of the National Cathedral came from small towns in Italy as early as 1890. And they all went to Barre, Vermont.

Roger Morigi, who studied at the Academia di Belle Arte di Brera in Milan, arrived in New York harbor from Genoa in 1927. After years of apprenticeship in Milan, Morigi became Master Carver at the Washington National Cathedral in 1956 where he labored for twenty-three years until his retirement. The last sculpture he carved was Adam. His major pieces are Majestus (the centerpiece of the altar), the statue of the Good Shepherd, and Adam of the west portal.

After Morigi’s retirement, Vincent Palumbo became Master Carver in 1978. Vincent started as the youngest and most inexperienced member of the crew, working with his father, Paul Palumbo. He worked at the Cathedral for “thirty-eight years since he immigrated to the United States from southern Italy in 1961.” (p. 77)

Frederick E. Hart created the famous base relief sculpture Ex Nihilo (Out of Nothing) that adorns the tympanum over the main entrance of the cathedral. It depicts “creation of humanity out of the torrential void.” Four life-size males and four females with closed eyes are “emerging from the primordial cloud,” a birth revealing the “majesty of the Divine Will.”

Paul Palumbo carved the keystone of Christ on the Cross, an unusual depiction of a very muscular Christ with oversized arms. Paul Palumbo also carved sculptor Granville Carter’s Archangel Michael statue, located in a niche in the south transept of the Cathedral.

Unfortunately, the stone carvers’ workshop, stone yard, and studio no longer exist on the Cathedral’s grounds; they have been demolished long time ago. According to Marjorie Hunt, a folklorist with the Smithsonian Center for Folklife and Cultural Heritage, the workshop was a veritable “League of Nations,” with carvers from all over Italy, Greece, England, Germany, and the United States.

I met Marjorie Hunt ten years ago at Georgetown University. She had co-produced and co-directed The Stone Carvers, an Oscar-winning documentary about the stone carvers she described in her 1999 book with the same title.

I toured the Cathedral with Marjorie Hunt as a guide but I saw this jewel of architecture through my own eyes. While I understood and admired the carving beauty built for posterity, the intricately sewn needlepoint pillows in the pews, bearing the names of powerful men in Congress and the Supreme Court, struck a strange chord with me.

What is so fascinating and unusual about this Cathedral is the fact that the carvers had complete freedom in choosing pinnacles, corbels, capitals, gargoyles, and grotesques. The grotesques decorate buttresses supporting the nave.

According to Marjorie Hunt, carvings such as gargoyles, angels, columns, pinnacles, and grotesques intertwine “the world of work” with hilarious moments in time, pranks, jokes, stories, memorable characters, quirks of various carvers, their habits and unusual traits of character, and the carvers’ imagination, using the world around them as inspiration:
– a scholarly owl , a wild cat, a winged creature, flowers, fish, pumpkins, sunflowers, carvers’ faces, the foreman, the laborer, the engineer, the boss, a golfer’s grip
– an image of Roger Morigi with his mallet and chisels, with a mushroom cloud above his head and a devil’s tail and horn, signifying his fiery temperament, and a set of golf clubs above his head, a symbol of his extra-curricular passion
– a pinnacle carving of Roger Morigi with his “beloved golf clubs and the master carver’s eagle eye”
– Vincent Palumbo, holding an air hammer, with exaggerated curly hair and moustache
– one carver on the scaffolding whistles at the passing girls while the next carving depicts the former dean of the Cathedral, Francis B. Sayre Jr., with a horrified expression of shock and disapproval
– Frank Zic carved himself “dreaming of deer hunting and winning the Maryland lottery,” with a wishbone on his left side and a deer antler on his right” (The Stone Carvers, p. 151)
– Frank Zic carved Gino Bresciani, the trice retiree, who was preparing for his fourth retirement with “a bag of money over his shoulder and his suitcase in his left hand (p. 152)
– Malcolm Harlow carved his family on the base of a pinnacle
– He also carved the caricatures of construction laborers Allen Goodwin and Henry Thomas – Goodwin with a chain hoist and dolly, Thomas with a cup of coffee, a doughnut, hot dog, and piece of pie
– Malcolm carved a tribute to all secretaries in a grotesque, with telephone, typewriter, and file cabinet (a grotesque is a gargoyle without a water spout)
– A pinnacle with columns and Ionic capitals honors the Cathedral sculptor Constantine Seferlis, a Greek
– Richard Feller, the canon clerk, is depicted with his drafting tools and the mountains from his native West Virginia
– Ludwig Malisky, a carpenter, is portrayed with his hammer and saw
– Walter Fleming, the foreman of all Cathedral laborers, is holding a whip wrapped around his head
– There is even an angel holding an Oscar, honoring Marjorie and the documentary The Stone Carvers that won an Academy Award in 1985
– Seferlis carved a hippie, an elephant, a donkey, a lawyer, a television producer, an angry cat ready to pounce, a man riding a stolen pig with a chicken in one hand, and a boy with a broken halo and his hand in a cookie jar
– Vincent Palumbo carved a good boy with a halo – the two boys were carved at the special request of a Cathedral donor
– A gargoyle was carved for a dentist, depicting him working on the cavity of a walrus
– John Guarante carved a lion roaring in anger and pain because his tail was tied in a knot; his ninety-six angels with overlapping wings and praying hands holding a dice with 7 encircle the central tower (pp. 156-157)

A memorial to Joseph Ratti, who died falling from scaffolding, was designed by sculptor Heinz Warneke and carved by Roger Morigi. There are two uncarved blocks of stone on the north wall of the Cathedral, in the spot where Ratti fell to his death. The statue depicts a stone carver working on an unfinished gargoyle, a tribute to Joseph Ratti, but also a reminder of the dangerous work involved in building the Cathedral.

The keystone of Mary Magdalene and Christ, located on the nave’s vaulted ceiling, is the last carving that Vincent Palumbo and his father worked on together before Paul Palumbo’s death.

The Washington National Cathedral is not just a symbol of Christianity and the house of God; it is a “compendium of life and work experiences, … a collection of texts that bear the imprint of the carvers’ hearts, hands, and minds.” (Marjorie Hunt, The Stone Carvers, p. 163)

It is sad that the Cathedral that bears the name of George Washington and represents our Judeo-Christian nation has been desecrated. What would the stone carvers, devout Christians – Catholics, Lutherans, and Orthodox – think and feel if they knew that their place of worship they spent almost a century to build with blood, sweat, and tears, has been changed, even for a short moment in history, into a mosque?

One thought on “The Washington National Cathedral, Not an Ordinary Place to Worship”