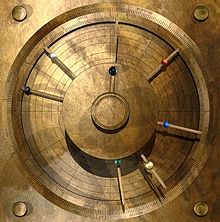 Antikythera Mechanism, computer-generated front panel Photo: Wikipedia
The advanced computer age has conditioned us to take for granted all the electronic devices surrounding us that bring instantaneous access to our friends and family, and eliminates the need for the NSA to do any field work to find out everything they ever want to know about us.
Anonymity has disappeared. Thanks to developments in the second half of the twentieth century and the beginning of the twenty-first century, we are now in the age of nanotechnology. Computers have changed in size from an entire building to the size of a credit card and even smaller.
I was very surprised to find out that we had an analog computer in 87 B.C. made of bronze. Captain Demetrios Condos sent his bored crew around the Antikythera Island to dive for sponges shortly before Easter 1900. His boat had been driven off course an entire week by gale winds off the Island of Crete into the calmer waters of the northern tip of Antikythera Island, Greece.
The most exceptional seaman, Elias Stadiatis, dove to 140 feet, aided by lead weights attached to his diving boots. He yanked the rope to be pulled up and, instead of bringing up sponges, he told Captain Condos about “naked women and horses” he saw on the bottom. The next dive revealed a shipwreck dating back to 80 B.C. Treasures and statues were scattered and plainly visible on the sea floor. The shipwreck find was so exciting! The happy sailors were imagining a treasure trove of gold coins and jewels.
When the salvage operation finally commenced in November 1900, the difficult and dangerous work lasted nine months. Dangerous weather conditions and primitive techniques made scuba-diving so precarious and perilous that one deep-sea diver died and two were seriously hurt.
Among the treasure trove found in the Mediterranean and later housed at the National Archeological Museum in Athens, an archeologist named Valerios Stais discovered one single encrusted bronze mechanism in a pile of discarded debris and marble pieces. It appeared to be a clock of sorts.
Fractured later into three pieces, the mechanism lost smaller pieces later during handling and cleaning. Since the initial find, 82 fragments have been discovered by subsequent expeditions, including that of Jacques Cousteau. Seven fragments are actually significant because they contain the mechanism’s gears and inscriptions in Koine Greek.
Valerios Stais announced in 1902 that his find, half the size of a portable typewriter at that time, was an ancient Greek astronomical device. Some thought it was an astrolabe, a tool used by navigators to measure angles of distances between planets and stars above the horizon. Others thought it was a planetarium. Some believed the mechanism was too complex to be either one and must have been “created by aliens from outer space.”
Professor Derek de Dolla Price of Yale concluded that it was a computer made in 87 B.C. comprised of 30 bronze gears to calculate the movement of the Sun, Moon, and planets. Professor Price described the discovery as “finding a jet plane in King Tutankhamun’s tomb!”
The Antikythera Mechanism, also called the Rhodes calculator, “the forerunner of the computer age” was described as the “wheeled computer of the heavens.” It mathematically calculated the movements of planets and celestial bodies during a period of time when humanity believed that the Earth was a disc floating on a great ocean with the sky above like a bowl. “The planets and the Moon were thought to move along certain geometrical paths.” The mechanism was to calculate and determine the celestial bodies’ exact movement, making further calculations unnecessary.
In 1976 Jacques Cousteau and his crew found coins at the wreck site dating between 76-67 B.C. Cousteau’s coins may point the origin of the mechanism to the city of Pergamon.
Because the mechanism was so complex, The Antikythera Mechanism Research Project concluded in the late 2000s that it was probably made in the Corinth colonies of ancient Greece such as Syracuse.
The Rhodian style vases may point to the city of Rhodes. Rhodes was a center of astronomy and mechanical engineering and home to Hipparchus with his theory of the motion of the Moon.
Michael Edmonds of Cardiff University described the mechanism in 2006 as “more valuable than the Mona Lisa” because the astronomy was correct.
Carman and Evans, in their 2014 study dated the mechanism to 200 B.C. and attributed it to the Babylonians. If that is so, why is the inscription in Koine Greek?
A new expedition is planned for spring 2015 by the Hellenistic Ministry of Culture and Sports. They are hoping to find new parts of the Antikythera Mechanism.

2 thoughts on “The Antikythera Mechanism, the First Analog Computer”