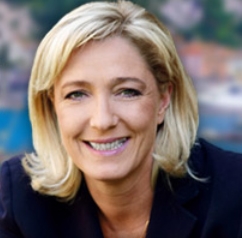 Marine Le Pen Photo: Wikipedia
In his valiant attempt to save our country from the illegal immigration invasion, the conservative talk show host Dr. Michael Savage asked with much passion the rhetorical question, “Where is America’s Marine Le Pen?”

Savage dedicated his monologue intro on March 6, 2015 to the issue of amnesty, fast tracking millions of illegal aliens, potentially 30-50 million by 2016, who, armed with Social Security cards and driver licenses, will install Democrat party rule in perpetuity, with Republicans whining about their minority status while enjoying full privileges of the ruling elite.

Stating that we don’t have another party in power, Savage continues, “We have the most extremist, anti-American administration in history. They must be stopped. There is no precedent in the history of the world to accept 30 million illegal aliens into a nation and to change the demographics forever, unless that nation lost a war and was conquered by a foreign power.” Have we lost a war and, if so, which one?

According to Savage, the current administration is flooding the country with illegal aliens, the “New Americans,” at imperative speed; they are presented by progressives as part of the “civil rights movement,” even though they are violating our borders and breaking into our country.

The Democrats, seeking a majority, are building up a voter base that does not speak our language and has no desire to do so; in gratitude, they are going to vote Democrat, so long as they are getting a pathway to citizenship and Obama welfare. “They’ll vote Democrat for thousands of years!” Savage exclaimed in frustration. “Who will watch the watchers? The FBI is supposed to watch this. But it is a wholly-owned subsidiary of the administration!” White people are now expected to step out of the way and give the country over to the flooding immigrants who are going to be integrated into mini-countries inside the United States. They will be the protected “New Americans” while the real U.S. citizens will suffer.

To facilitate this fundamental transformation, our children will be tracked with behavioral assessment for kids. “If your child is too American, or too hetero, they are going to red flag him,” said Savage.

Mental health care and substance abuse care for all the junkies will be paid for by Obamacare at a cost of $30,000 per week even though recidivism rate is high. The treatment facility, he says, will offer “group therapy, yoga therapy, sex therapy, meditation.” He believes “cold turkey therapy works.” All this expensive therapy is just a con, he said, “They are looking for sympathy.” And the treatments for substance abuse “will add to the huge cost of Obamacare.”

“Why do we not expend money on the exceptional [kids] in America? When was the last time the Obama administration spent any money on the exceptional, not the downtrodden, not the junkie, not the substance abuser, but the exceptional children who are not challenged enough in the classroom because they are spending time on the stupid ones? Has there been any money earmarked for the gifted child,” he asks. “I doubt it; it’s called the lowest common denominator. You keep sinking the class lower and lower. No gifted classes, nobody is looking for the bright children, as if they are the freaks of society.”

To make matters worse, the Common Core standards of education, now adopted around the country, teach anti-Americanism, proselytize children into Islam, and teach students revisionist history, making them ashamed of who we are, of our achievements around the globe, of our country, of our culture, and of Christianity. Symbols of our nation, our flag, the Pledge of Allegiance, and the National Anthem are often stripped from official locations and public events. Lessons indoctrinating children into Islam and communism are now common around the U.S.

Looking at France, trying to save itself from the “scimitar of radical Islam that is threatening to cut their throats,” Savage describes how Marine Le Pen proposes to do so. Smeared as a far-right politician, Marine is a “nationalist who loves France.” Savage said that “she is hated by the Socialist scum who have ruined France and exposed them to the Islamic sword.” The “slimy political class considers her xenophobic because they pander to third-worlders whom they flooded into their country,” but she wants to return the power to the French people.

Le Pen views the French government’s plan to control homegrown jihadis as nonsense. Her solution is a zero tolerance on Shariah Law, no Muslim holidays, enforcement of French-speaking in mosques, no Arabic in mosques, and stripping dual citizenship jihadis of their French citizenship.

“Why wouldn’t’ that work in America,” asks Savage? Marine Le Pen thinks an overhaul of French foreign policy is necessary and a review of relationships with countries like Qatar and Turkey who support terrorism. Chaotic mass immigration has created places where the French public is afraid to go. “There is no Islamophobia in France,” Savage is quoting Le Pen. “There are no anti-women acts. There is a rise of anti-Semitism.”

Savage describes Le Pen as the champion of the little guys against globalization; France should leave the euro from the Euro zone, boost the franc in trading; France does not need experience, “it needs a fresh pair of eyes.”

“She is hated by President Francois Hollande. She has laid out her vision for France. Why don’t we have a Marine Le Pen? Why don’t we have a true conservative party in this country,” asks Savage. But then he readily admits that a third party would be a catastrophe at this point in our country.

Who is Marine Le Pen? Member of the European Parliament, President of the Front National, the third-largest political party in France since 2011, lawyer and youngest daughter of long-time Front National leader Jean-Marie Le Pen, Marine is criticized as a far-right politician based on her “divisive approach to immigration,” which urges the west to “eradicate the cancerous cell that Islamic fundamentalism represents.”

In a recent article in the New York Times, “To Call This Threat by Its Name,” Marine Le Pen states that “France, land of human rights and freedoms, was attacked on its own soil by a totalitarian ideology: Islamic fundamentalism.” She describes the need to distinguish between Islamist terrorism and their faith because “Islamist terrorism is a cancer on Islam, and Muslims themselves must fight at our side.” http://www.nytimes.com/2015/01/19/opinion/marine-le-pen-france-was-attacked-by-islamic-fundamentalism.html?_r=0

She continues, “Everything must be reviewed, from the intelligence services to the police force, from the prison system to the surveillance of jihadist networks.” She identifies three mistakes made by those in power.

1. The free movement of people and goods across the European Union borders must be revisited as it encourages the free flow of tons of weapons from the Balkans and jihadis move unhindered across many nations.

2. The massive wave of immigration does not include an assimilation policy. The desire to assimilate on the part of the immigrants does not exist. Culture is a major influence “on the way immigrants relate to French society and its values, on issues such as the status of women and the separation of state and religious authority.” She infers that immigrant cultures are at odds with French secularism, the “laïcité.” High unemployment is exacerbated by this massive immigration.

Le Pen stresses that safety, liberty, sovereignty, French values, and independence are most important if France is to be saved from Islamist Fundamentalism.

And the words of Dr. Savage seem to echo in the wilderness, “Where is America’s Marine Le Pen?”
Copyright: Ileana Johnson 2015