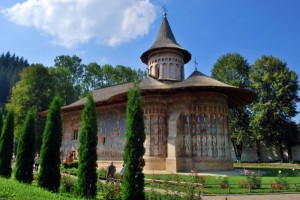 Voronet Monastery Photo: Wikipedia
These days Romania receives bad press and Romanians are preceded by an unfair and negative reputation across the European Union thanks to its large indigenous gypsy population that travels to Western Europe in search of jobs and lucrative activities and businesses, legal or illegal.
You can only punish a person or a nation so much before that punishment starts to invade who they are, so I decided to write a short article highlighting some of the famous people and facts that are seldom mentioned or known about Romania. Truenomads.com has more interesting trivia and links for the curious traveler in search of history. 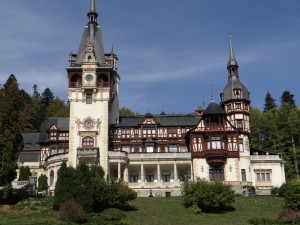 Peles Castle Photo: Ileana Johnson 2012
I wrote about Peles Castle in my newest book, Communism 2.0. Peles Castle, the royal residence and now a museum, with its first corner stone erected in 1875, was the first European Castle to have self-generated electricity and heat in 1888 which are still operational today. But during Ceausescu’s brutal socialist/communist regime, the rural population survived by oil lamps.
The town of Timisoara was the first European city that used electricity in 1884 to illuminate its streets, second after New York City. In 1869 Timisoara was also the first European city to operate trams pulled by horses. 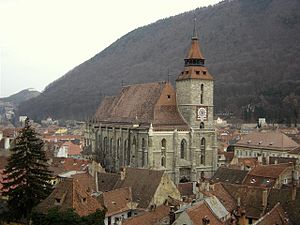 The Black Church Photo: Wikipedia
The largest gothic church located in Eastern Europe is The Black Church in Brasov. Built in 1380 and partially destroyed by a fire in 1689, hence its name, the Black Church has an organ with 4,000 pipes and a bell that weighs 6.3 tons.
The tallest wooden church in the world (78 meters) is located at Peri-Sapanta Monastery in Maramures. With its 7-meter cross weighing 455 kg, the church was built by Ion Macarie in 1766 for the Greco-Catholic community, to replace the previous stone church that stood there for 312 years.
The Unitarian Church was founded in Transylvania, in western part of Romania, the birthplace of Francisc David in 1510.
The Voronet Monastery in Moldova is known by its moniker, the Sistine Chapel of the East. The Biblical figures painted inside and out have a folkloric twist and date back from 1488. The famous blue color of Voronet and the greens are as vivid today as they were when painted during the reign of Petru Rares. 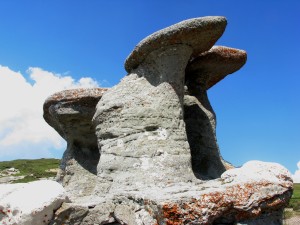 Bucegi Mountains Photo: Wikipedia
The beautiful Carpathian Mountains with rare and interesting rock formations such as Babele and active mud volcanos are home to the most virgin forests in Europe with over 400 unique animal species, including the Black Goat and sixty percent of the European brown bear population.

Scarisoara Glacier Photo: Wikipedia
Romania is home to the second largest subterranean glacier in the world. Situated in the Apuseni Mountains, not far from the town of Campeni, the Scarisoara Cave (Pestera Scarisoara) was first mentioned in 1863 by the Austrian geographer, Adolf Schmididi, who drew the first map of the cave. The largest such glacier is in Slovakia. The glacier, jutting from the icy waters of the cave, at the 1150 m altitude, is 3000 years old, with a total surface of 5500 square meters of ice, as thick as 37 m in some places and as thin as 26 m in others. It is a cave explorer’s dream.
The best preserved natural wonder in Romania is the Danube Delta where the River Danube flows into the Black Sea. The Danube, originating from the Black Forest Mountains in Bavaria, flows into the sea, forming the second largest delta in Europe and the best preserved with 3,540 square kilometers of unusual fauna, flora, rivers, canals, swamps, lakes, and arbors with islands of reed.
The oldest Homo sapiens fossils, carbon-dated to 37,800-42,000 years ago, have been unearthed in the south-western part of Romania. It is an archeologist’s dream, amateur or professional, to join the many on-going digs around the country, finding evidence of Romania’s early history, and its ties to the Roman Empire and to the fights with the indigenous Dacians.
The discovery in 1961 by archeologist Nicolae Vlassa of three clay tablets with unusual inscriptions that predated the Sumerian writings from 3300 BC, convinced some archeologists and historians that the Tartaria tablets, dated around 5500 BC, could place the written language away from Mesopotamia to the Danube River area in Romania.
Among famous inventors and Romanians of note stands Henri Coanda. The Bucharest-born inventor presented at the International Aeronautical Exposition in Paris in October 1910 at Champs-Elysee a red airplane without a propeller marked “COANDA-1910.” The single-seat plane was different because it was propelled by a piston-motor with 4-cylinders cooled by water, producing 50 HP at 1,000 RPMs, and then transferred to a compressor at 4,000 RPMs. While trying to test the motor, Coanda actually took off in his propeller-less unusual airplane that was shooting flames. Since he had not flown such a contraption before, Coanda made a forced landing. His extraordinary flight occurred 30 years before Heinkel, Campini, and Whittle and was the precursor of the famous Concorde.
Petrache Poenaru from Benesti, Romania, obtained in May 1827 the French patent for “plume portable sans fin, qui s’alimente elle-même avec de l’encre,” the portable pen without end which supplies itself with ink, the first fountain pen in the world. The remarkable inventor was Tudor Vladimirescu’s secretary during the Revolution of 1821. He escaped by fleeing to Paris where he received in 1826 a scholarship to complete his engineering studies at the famous Ecole Polytechnique.
Professor Nicolae Paulescu discovered insulin in 1921, the hormone that regulates metabolic lipids, minerals, proteins, and named it “pancreina.” He published his research and findings in a Belgian journal under the title, “Recherches sur le rôle du pancréas dans l’assimilation nutritive.” In 1916, during final research stages, the Germans occupied Bucharest and delayed his announcement of the final results. However, two enterprising Canadians, Frederick Banting and Charles Best, using Paulescu’s 30 years of research and published papers, isolated insulin and used it to treat a patient 8 months earlier. For this reason, they received the 1922 Nobel Prize in Medicine. Millions suffering of diabetes are saved by Paulescu’s research.
Ioan Cantacuzino is said to have developed the “Cantacuzino Method” of the anti-cholera vaccination. He was also instrumental in treating typhus and tuberculosis effectively, developing the notion of contact immunity.
The Romanian inventor Traian Vuia was the first to build and fly on March 18, 1906 an “automobile-plane with fixed wings” that was totally self-propelled.
A Romanian doctor, Ana Aslan, specializing in gerontology, prepared a product in 1952 at her clinic in Bucharest, which she named Gerovital or Vitamin H3, patented in over 30 countries, to treat dystrophic ailments in the elderly. Among her more famous patients are Tito, Pinochet, Charles de Gaulle, Claudia Cardinale, Charlie Chaplin, royalty, bankers, famous businessmen, and even President John F. Kennedy.
Renowned for its gymnastics school made famous by Coach Bella Caroly, one of his pupils, Nadia Comanici, was the first gymnast to receive a perfect score of 10 in the Olympics in Montreal, Canada in 1976.
The huge Parliament building, a painful reminder of Ceausescu’s communist destructive megalomania, is second largest in the world after the Pentagon building. Many beautiful and important historical and religious landmarks had been destroyed to make room for this opulence.
So many exceptional young Romanians have left their home country and still do today, trying to find themselves, their art, talent, education, freedom, and economic opportunity. Some make it, some remain in anonymity.

Poet Mihai Eminescu Photo: Wikipedia
Most memorable are the famous sculptor Constantin Brancusi who, in his old age, wanted to leave his entire life’s work to his compatriots in Romania but was refused; the celebrated composer, violinist, pianist, and conductor George Enescu, one of the greatest composers of the 20th century;, and the legendary Romantic poet, novelist, and journalist Mihai Eminescu who wrote about valiant Romanian fighters and its tumultuous history; and the comedic and witty playwright Ion Luca Caragiale whose short stories, poems, political commentaries and plays rejoiced in painting the foibles of humanity; and the playwright Eugen Ionescu, who wrote mostly in French, a prominent figure of the French Avant-garde theatre.
Copyright: Ileana Johnson 2015