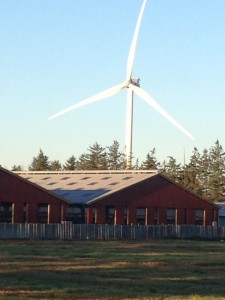 Danish mink farm (Photo: WCN)
Touting the power of wind and “the possibilities to reshape our energy systems, decarbonize our economies and boost job growth,” the Global Wind Day is coordinated worldwide by the European Wind Energy Association, the Global Wind Energy Council, and various national associations.
Solution Wind, a global awareness campaign is also publicizing the wind industry in advance of the COP21 (U.N. Framework Convention on Climate Change, also known as “Paris 21”) climate negotiations in Paris, November 30-Decemmber 11, 2015. http://www.cop21.gouv.fr/en
The U.N. Framework Convention on Climate Change was one of the three documents produced in 1992 at the U.N. Conference on Environment and Development in Rio de Janeiro. President George H.W. Bush signed the U.N. Framework Convention on Climate and U.N. Agenda 21 documents produced at this conference but refused to sign the U.N. Convention on Biological Diversity document. http://unfccc.int/essential_background/convention/items/2627.php
Having invested $100 billion in 2014, the wind lobby advertises wind energy as “mainstream and the fastest growing industrial sectors in the world.” Activities to convince the general public that wind energy is harmless include “family outings, wind farm visits and seminars with experts and leading industry figures.”
Their website explains that “In the EU alone, the wind industry installed more than gas and coal combined last year with enough cumulative installed capacity to meet 10.2% of the region’s electricity consumption, equivalent to powering 73 million households.” What about the other 90% of electricity needs? http://www.ewea.org/globalwindday/
Mark Duchamp, Chairman of the World Council for Nature has issued a press release in advance of the “wind lobby celebration of Global Wind Day” on June 15, 2015. “Hundreds of events are organized worldwide to convince people that wind farms are useful, cheap, harmless to birds and people, good for property values and great for tourism and the economy,” said Mr. Duchamp.
Calling this celebration a “global wind scam day,” Mr. Duchamp lists many economic problems and health issues associated with wind farms which have been operated on a worldwide scale since the 1980s. They provide unreliable and intermittent electricity at a cost that is “three times more expensive than that generated by conventional power.”
He claims that the wind industry, heavily subsidized in all countries, finances political parties through kickbacks via a subsidy “revolving door.” The wind industry provides and guarantees profits to a new “class of green crony capitalists.” In his view, the wind turbine industry negatively affects the economy of some countries, facilitating the political takeover of “anti-establishment parties” such as “Podemos” (We Can) in Spain. Where have we heard that catch-phrase before?
Making references available to readers, Mr. Duchamp lists the unresolved economic and social issues associated with wind turbines:
– State and countries who rely on renewable energy become less competitive and poorer
– Wise investors prefer states where energy is cheaper
– Higher energy prices and taxation related to “green energy” cause companies to relocate abroad
– Higher renewable energy costs are subsidized by taxpayers and consumers, thus causing “fuel poverty”
– Deficits increase when subsidies and other bailouts finance “unprofitable and unreliable wind energy”
– The unsightly wind turbines alter the landscape, destroy the “view shed” touted by environmentalists in this country, and depreciate the value of “heritage sites”
– The huge turbine blades chop millions of birds and bats every year, including the majestic golden eagle in the U.S. and perhaps some endangered species
– Properties located near the turbines lose anywhere “from 10% to 50%” of their value
– Just because a turbine spins, it does not necessarily produce energy
– Wind turbines must use electricity generated by “dirty” fossil fuels in order to be properly maintained and to prevent rusting of gears
– Many turbines have been abandoned or shut down as requested by residents who could not stand the noise even after the community had invested millions in their installation
– Frequently hit by lightning, turbines catch fire and threaten anyone nearby when the fire cannot be put out or the blades literally spin out of control
– Residents living in the vicinity of turbines are affected by “shadow flicker” during certain hours of the day and stressed out by the constant thump-thump noise coming from the wind turbine, especially at optimal operating wind speed – “allowed noise limits are frequently exceeded”
– Residents and animals are negatively affected by infrasound emitted by turbines and exhibit disturbing behavior and serious negative health effects
http://wcfn.org/2015/06/04/global-wind-day-2/