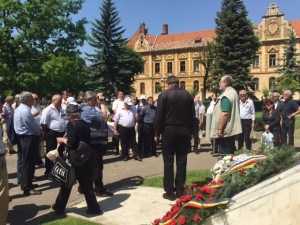 Brasov Rally 5-21-15
Photo: Ileana Johnson 2015
On a beautiful sunny morning, May 21, 2015 when the Orthodox celebrated Ascension Day and Sf. Elena, we walked in the beautiful park downtown Brasov set at the foot of Timpa Peak, where a crowd had gathered in front of a large cross and several tombs of the young men and women killed on December 22-26, 1989, during the Revolution that toppled Ceausescu’s brutal communist regime. Some of them came to a rally and some were simply walking through the park. 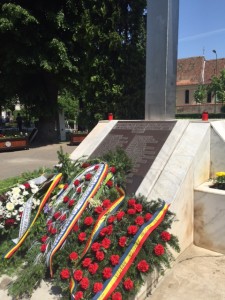 Wreaths placed at the foot of the cross
Photo: Ileana Johnson 2015
Shots rang out from many directions, mowing down those unfortunate enough to be in the path of the stray bullets. As many as 46 people were shot within ninety minutes. Two large flower wreaths were placed in front of the cross in their eternal memory.
I interviewed Mircea Brenciu, member of Uniunea Scriitorilor din Romania (Writers’ Union) and spokesperson for Asociatia Revolutionarilor din Brasov (Association of Revolutionaries from Brasov). Brenciu gave a fiery speech to the crowd of mostly middle-aged men who had gathered on Ziua Eroilor (Heros’ Day) to pay respects to those who died for freedom, freedom that had been squashed in Romania during more than four decades of communist terror. 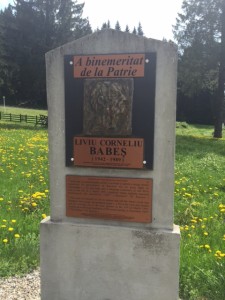 Liviu Babes Memorial in Poiana Brasov
Photo: Ileana Johnson 2015
I journeyed to Poiana Brasov to pay respects to Babes. A plaque commemorating his sacrifice (and erected by Mircea Brenciu and his organization) stood next to a small wood church. I went inside to pray for him and for my Dad and I encountered a young priest. I asked him about Liviu Babes and he let me know in direct language that the church considers him an apostate because suicide is not condoned. But his next words shocked me even more. He said that the church teaches the parishioners to obey the state and the government at all costs. I tried to reason with him by asking what he remembered from Ceausescu’s regime. This priest was barely 5 years old when Ceausescu was executed. He told me that he remembered long lines with his mom trying to buy food on rationing coupons, otherwise, he said, it was fine. I left speechless. His washed brain and twisted view of reality clashed terribly with historical facts.

Wood Church in Poiana Brasov
Photo: Ileana Johnson 2015
It is a shame that there is no monument where one can pay their respects and light up a candle to the memory of those who fought against communism. Brasov gave their heroes who sacrificed for the European fight against communism. It is shameful, “people who don’t respect their past, have no future,” Brenciu explained.
“I have a fear that we are going to lose our country,” Brenciu concluded. “I only see one solution, to bring back the institution of monarchy.” The people are disoriented and discouraged, he explained. “The biggest theft occurred under the ten-year rule of President Traian Basescu.” The Revolutionaries are supporting the new President, Klaus Johannis, the former mayor of Sibiu, but his success depends on the political class. Right now the country is terribly divided.
There is a saying that goes, “Our country is so beautiful, it is sad that it is inhabited.” We have so many simple and uneducated people who are easily manipulated by the mass-media, they are voting for the wrong people who control, lie, cheat, and steal. In exchange for a vote, bribes of 5, 10, 15 euros are paid and accepted.
And schools are no longer teaching healthy values and morality. Democracy and freedom are understood as a lack of morals, honesty, personal responsibility, and as a culture of welfare dependency somewhat different from the communist culture of dependency where at least one had to pretend to work. “We are losing our national identity and it is deplorable.”
Days after the interview I was mulling over the similarities between the fate of our countries in terms of purposeful destruction, curricular indoctrination, moral bankruptcy, banking corruption, crony capitalism, disinformation of the voting populace, and the endemic corruption of the ruling elites.