Baragan Photo: Wikipedia
Øystein Hovdkinn, Norwegian Ambassador to Romania, allegedly praised Romania’s potential in energy and agriculture during a 2013 press conference, while mentioning the following inexplicable quandary. „You can feed 80 million people, but you import two-thirds of your food. It is the biggest paradox, it’s insanity.”

How is it possible that Romanians, citizens of an agrarian society for centuries, have become doctors, lawyers, and engineers, but have neglected to farm, an important occupation for the survival of a nation? During Ceausescu’s regime the country managed to feed through intensive exports part of the west and parts of Africa but today, the vast fertile fields remain unused, full of weeds and abandoned to soil erosion by wind and rain. 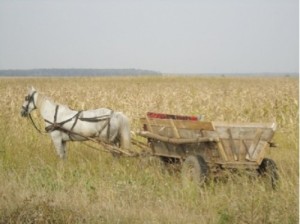 Romanian corn field
Photo: Ileana Johnson 2011
Where does the food come from? Aside from small farms, industrial scale agriculture no longer produces Romania’s food. Wheat, corn, and sunflower seeds make up half of exports but most finished goods including food come from imports.

Adrian Porumboiu, who owns Racova Com Agro Pan of Vaslui, is quoted as saying that Romania imports cherries from South Africa and beans from Ethiopia. http://www.activenews.ro/economie-agricultura/Ambasadorul-Norvegiei-catre-romani-Puteti-hrani-80-de-milioane-de-oameni-dar-importati–doua-treimi-din-alimente.-E-o-nebunie-123525

According to ampress.ro, items like pork and sugar constitute a large percentage of imports. http://www.expunere.com/ambasadorul-norvegiei-catre-romani-puteti-hrani-80-de-milioane-de-oameni-dar-importati-doua-treimi-din-alimente-e-o-nebunie.html

Lucian Avramescu asked in his scathing article „why Romania imports garlic from China, leeks from Egypt, apples from Poland, and lettuce from Brazil.” I saw with my own eyes in May this year pears from Chile. I thought to myself at the time, these pears have come a long way to Ploiesti. Where are the Romanian pears? Fruit orchards were abundant when I was growing up. And locals grew fruit trees in their own back yards. 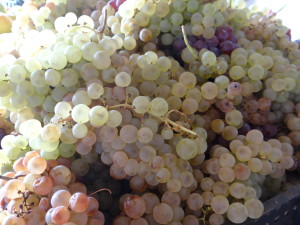 Romanian table grapes
Photo: Ileana Johnson 2012
„Why purchase grapes abroad when you have vineyards that produce the most diverse varieties of table and wine grapes, enough to fill the most regal tables of the world?” said Avramescu. „Why buy grapes from Italy when you have vineyards in Dragasani, Pietroasele, Valea Calugareasca, or Odobesti, grapes that are just as good if not better than those purchased from Italy where they are sprayed abundantly with pesticides,” he added. I now understand why in our Italian apartment in Veneto, overlooking a vineyard, we never saw any mosquitoes or flies even though, in the absence of air conditioning, we left the windows wide open day and night.

Why would anyone import food for a population five times smaller than the actual amount of food they could grow themselves if they tried again? Instead, as Avramescu said, Romanians export wood and import wheat into a „Grain Country.” The fields of grain used to be so tall that a rider on this horse could hide nicely in the wheat blowing in the wind.

What happened? Why import garlic from China which has been fertilized „with human feces,” said Avramescu. Why import shrimp from the sewers of China when we have the Black Sea and the Danube Delta? There is a simple answer – globalism and EU control. Billions in grants and easy finance come from the EU with strings attached.

Romania is not alone when it engages in insane trade policies and agricultural practices. More and more local agricultural businesses and large farms around the world have been bought by China. Pigs and chickens are shipped to China from the U.S. to be processed and then shipped back to grocery stores in the U.S. without provenance labeling.

The Norwegian was kind, said Avramescu, he only called the importation practice „paradoxal.” What he meant to say, „it is idiotic.”

Romanians may no longer grow enough food to feed 20 million people on the abandoned Baragan fields that used to be the breadbasket of the Balkans. Mini tornadoes of dust swirl in the air between the slow-turning wind turbines that dot the barren landscape in Baragan. The good news it that they’ve been incentivized to use renewable energy they can barely afford in their homes and to reduce pollution through a 306 million euro grant from Norway. Who needs to grow food to survive when becoming green saves the planet?

What if the exporter decides to reduce crop yield due to drought, unforseen natural circumstances, or increase its own domestic reserves of grain? What will the importer do?