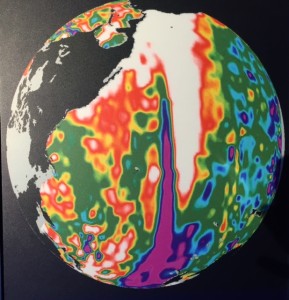 Photo: Ileana Johnson 2015
On a recent trip to California, I was constantly reminded of what is wrong with California, a state whose economy was so booming decades ago that, had it been a stand-alone state, it would have been the world’s sixth largest economy. Looking at this state now, ravaged by years and years of Marxist policies, open borders, unchecked illegal immigration, anchor babies, multiculturalism, insane diversity rules, sanctuary cities, multi-lingual school system, illegal voting, tax everything and tax again, and environmentalist-driven water use plans including but not limited to dumping billions of fresh water into the ocean in order to save the Delta smelt while orchards and fields are starved for water and trees and crops have long dried out.
California is more concerned with smoking habits if you take into account expensive signs posted everywhere announcing in big, bold letters to those who can read English, “Warning: Birth Defects – Tobacco smoke is known to the state of California to cause cancer and birth defects or other reproductive harm.”
California is so protective of animals and planets, even wolves and planet Earth need lawyers. Earthjustice was offering their services through a beautiful ad at the airport for the traveling endangered wolves culled by indiscriminate killing.
California was the golden state, the sunshine state, but the gold has long run out, the luster is now tarnished, perhaps golden brown on account of all the dead grasses from the three-year drought.
California still does something right, NASA’s Jet Propulsion Laboratory in Pasadena. For over fifty years, JPL‘s robotic missions have explored every planet in our solar system. Today, in addition to monitoring Earth and exploring the solar system, JPL “probes deep space in our galaxy and outward to the greater universe.” Managed by the California Institute of Technology for NASA, the Jet Propulsion Laboratory is a federally funded research and development center for domestic as well as international entities.
JPL built many firsts:
– Mariner 2 in 1962, the first successful interplanetary spacecraft
– Mariner 9 in 1971, the first spacecraft to orbit another planet (Mars)
– Voyager 2 in 1979-1989, the first tour of the outer planets
– Galileo in 1997, the first orbit of Jupiter
– Cassini in 2004, the first orbit of Saturn
– Deep Impact in 2005, the first comet impact
– Voyager 1 in 2013, the first spacecraft to reach interstellar space 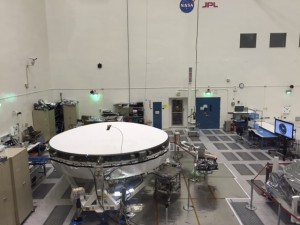 The new Cassini Photo: Ileana 2015
Cassini is a cooperative mission of NASA, the European Space Agency and the Italian Space Agency, with other hundreds of scientists and engineers from Europe and the U.S. The spacecraft’s final orbits have been named the Grand Finale.
The orbiter Cassini, the largest interplanetary spacecraft built by NASA was launched on October 15, 1997, from Cape Canaveral in Florida, with a Huygens probe aboard owned by the European Space Agency. In 2017, when the Grand Finale spacecraft falls into Saturn’s atmosphere, it will end twenty years of extraordinary mission of exploring Saturn, its rings, Titan, icy satellites, and the magnetosphere. During the first decade of orbiting, 500 gigabytes of scientific data were beamed to Earth through NASA’s Deep Space Network; Cassini made 200 orbits of Saturn, 132 close flybys of Saturn’s moons and discovered seven new moons.
Top discoveries of Cassini include:
– Huygens probe onboard Cassini parachuted to Titan, the first such landing on a moon in the outer solar system
– Icy plumes were found spraying from “tiger stripe” fissures on Enceladus, one of Saturn’s moons
– The moons on Saturn were active and dynamic – showing how planets and moons form
– Saturn’s largest moon, Titan, has rain, rivers, lakes, and seas and is surrounded by thick, nitrogen-rich atmosphere, perhaps similar to what Earth’s was like long ago
– Images of the northern storm of 2010-2011 which covered Saturn for months
– Radio-wave patterns are not tied to Saturn’s interior rotation
– Images of vertical structures inside the rings piled more than 2 miles high
– Titan’s prebiotic chemistry
– Giant hurricanes at both Saturn’s poles
– North polar hexagon of Saturn
By the end of its 20-year mission, the new Cassini probe assembled with a much larger antenna will make “detailed maps of Saturn’s gravity and magnetic fields, revealing how the planet is composed on the inside,” how much material is in the rings, and perhaps elucidate the mystery of how fast the interior of the planet is rotating. It will take pictures of rings and clouds and “sample icy ring particles being funneled into the atmosphere by Saturn’s magnetic field.”
JPL also monitors the Earth’s climate through its GRACE-FO (Follow On in 2017) by tracking Earth’s water in motion with more precise measuring instruments than its predecessor GRACE. Tracking variations in gravity which was assumed to be caused by the movement of water, JPL monitors changes in underground water storage, water stored in lakes and rivers, soil moisture, ice sheets and glaciers, and sea levels caused by adding water to oceans. 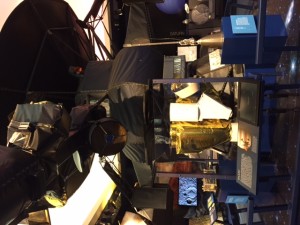 Galileo spacecraft Photo: Ileana 2015
Galileo used a 400-Newton retrorocket to slow it down enough to be captured into orbit. The propulsion system was provided by Germany and built by Messerschmitt-Boelkow-Blohm (MBB).
JPL crashed three Ranger spacecraft into the moon’s surface. Surveyor missions were able to soft-land on the Moon and Surveyor 7 photographed the rim of Tycho Crater. This landing paved the way for humans to land on the Moon, proving that a spacecraft “would not sink into the lunar surface.”
According to JPL archives, the 1969 Apollo 12 lunar landing was made by astronauts within 200 meters (656 feet) of Surveyor 3.
Venus was explored by Magellan from 1989-1994 and was able to map its surface from orbit even though its atmosphere was very thick. Flight controllers tested a maneuver called “aero-braking.”
Our solar system, moving through space at 250 kilometers (155 miles) per second, is part of the Milky Way Galaxy, and was born about 4.6 billion years ago. The Sun, one of more than 100 billion stars in the Milky Way Galaxy, is orbited by eight major planets, their moons and rings, asteroids, comets, and dwarf planets.
“The Sun gives off energy created by reactions in a nuclear furnace at its core. That power plant supplies virtually all the energy for our solar system. Our star sustains life and affects climate processes on Earth. Violent transfers of matter and energy from the Sun to the Earth, such as solar flares, can disrupt our communications systems and endanger astronauts.” (JPL Museum Archives)
Genesis collected between 2001-2004 samples of the solar wind – a stream of charged particles flowing out from the Sun. It returned them to Earth for analysis in laboratories.”
Comets contain in their nucleus “the oldest material in the solar system.” JPL’s Deep Space 1 spacecraft passed by Comet Borrelly in2001 and sent back interesting photographs of jets forming a coma of dust and gases. “A comet is a time capsule from the formation of the solar system.” Comet Hale-Bopp wowed millions in 1996-1997 with its “tails of dust and blue plasma stretching across the sky for weeks.” In the year 4385, this comet will come close to the Sun again.
Meteorites collected from Antarctica and around the globe are metal or stone fragments that fall to Earth from asteroids, Earth’s Moon, Mars, or comets.
JPL tracks asteroids, pieces of smaller planetary bodies made of rock. Most are found in the Asteroid Belt and some have orbits that bring them in close proximity to Earth. They can be a few meters to over 900 kilometers across. The second most massive asteroid is Vesta (530 km across). Most asteroid orbit the Sun in the Asteroid Belt located between the orbits of Mars and Jupiter.
Jupiter is the largest planet in the solar system and is made up of gas and clouds with ammonia crystals and other ices. Jupiter’s strong gravitational pull keeps her moons and rings in check. Voyager 1 discovered Jupiter’s ring and the volcanoes on it.
Galileo Galilei looked at Saturn through his telescope in early 17th century and declared that Saturn had “ears.” Voyager 1 spacecraft photographed with high resolution this giant planet made of gas. The Hubble Space Telescope took clear photographs that elucidated the mystery of its atmospheric composition. Using data from Cassini’s ultraviolet-sensitive instrument, a colorized version of Saturn’s rings was drawn. Among the many moons embedded in Saturn’s rings, scientists at JPL have studied Enceladus and Titan. Apparently Enceladus’ ice volcanoes spray frozen particles into space through geyser-like vents. Titan has a smog-like atmosphere which it is believed to resemble the “primordial Earth.”
The “ice giant” Uranus shrouded by methane was visited by Voyager 2. Uranus has the coldest atmosphere of all the planets hence his moniker of a frigid world. “Uranus orbits the Sun on its side.”
Voyager 2 visited Neptune in 1989 and its moon Triton, with its “coldest surface in the solar system.” A “cantaloupe terrain” and “geysers that spout dark material from beneath its surface of nitrogen ice” were also discovered. A “near twin to Uranus,” Neptune has an atmosphere composed of hydrogen and helium with traces of methane.
Pluto, a dwarf planet and member of the Kuiper Belt, is a frigid world two-thirds the diameter of Earth’s Moon, with a methane ice surface and a very thin atmosphere. Pluto makes one trip around the Sun in 248 years.
The Space Flight Operations Facility, a National Historic Landmark since 1985, controls dozens of missions. Each team of controllers is responsible for communications to and from their assigned spacecraft via the sensitive antennas of the Deep Space Network. These antennas swivel on their bases and track spacecraft from horizon to horizon, dividing the earth into three sections, both listening and talking to their targets. The largest antennas are 10 stories tall with dishes 230 feet across.
The Space Flight controllers coined a phrase that allows one to say, once I visited the Space Flight Operations Facility, “I’ve been to the center of the Universe.”