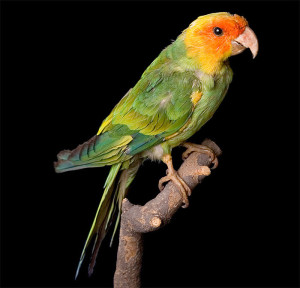 North Carolina parakeet
(Photo: Wikipedia)
Willis Eschenbach, who takes pride in saying that he is not a trained scientist but has logged thousands of hours of research on the subject, was the first person to file a FOIA request for the infamous data from the University of East Anglia CRU. Hackers downloaded emails from said university that had shown that scientists had manipulated the data to agree with the global warming theory.
Eschenbach lectured an audience in California about the “Myth of Species Extinction,” more specifically, the legend that humans have caused the disappearance of countless birds and mammals with their existence and industrial activity.
A popular myth states that “we are in the sixth wave of extinction,” said Eschenbach. It appears that life on Earth experienced five mass extinctions due to natural disasters but some biologists are talking about a sixth wave of extinction caused by humans. The top five extinctions are:
– Ordovician-silurian extinction (small marine organisms disappeared)
– Devonian extinction (tropical marine species died out)
– Permian-triassic extinction (“largest mass extinction which included many vertebrates”)
– Triassic-jurassic extinction (“vertebrate species on land allowed dinosaurs to flourish”)
– Cretaceous-tertiary extinction
http://www.amnh.org/exhibitions/past-exhibitions/dinosaurs-ancient-fossils-new-discoveries/extinction/mass-extinction 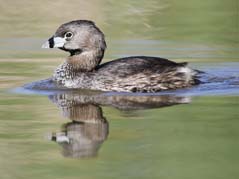 Atitlan grebe (photo: Wikipedia)
E.O. Wilson, a biologist from Harvard, said that there were 27,000 species going extinct each year for over twenty years at least, that’s over half a million species. If that is so, “what are the species, where are the corpses,” asked Eschenbach?
“We’re in the end game all around the world,” said the Pulitzer-Prize winning biologist. E. O. Wilson, described as “one of the world’s most influential and eloquent thinkers on endangered species issues,” said “’hot spots’ for biological diversity tend to be in the same parts of the developing world where poverty has created ‘oppressed, land-hungry people with no other place to go.’”
“In The Skeptical Environmentalist, statistician Bjorn Lomborg has disputed Wilson’s claim that 27,000 to 100,000 species are becoming extinct every year.” http://news.nationalgeographic.com/news/2002/08/0809_wireowilson.html
Eschenbach said that he decided to check the causes of extinction looking at species-area relationships. An article in Nature stated that “species-area relationships always overestimate extinction rates from habitat loss” and admits that estimating extinction rates is still “highly uncertain because no proven direct methods or reliable data exist for verifying extinctions.” But somehow, “extinction from habitat loss is the signature conservation problem of the twenty-first century.”
“The most widely used indirect method is to estimate extinction rates by reversing the species-area accumulation curve, extrapolating backwards to smaller areas to calculate expected species loss. Estimates of extinction rates based on this method are almost always much higher than those actually observed.” http://www.nature.com/nature/journal/v473/n7347/full/nature09985.html
Eschenbach looked first at the Red List which “hypes the extinction” of birds. He then looked at the list from the American Museum of Natural History (New York) which covers mammals. The problem was to actually determine what constitutes an extinction, its taxonomy, specimens, DNA, to show that they are a species, how we look for it, and the criteria for extinction.

Slender-billed grackle (photo: Wikipedia)
E. O. Wilson talked about extinctions due to habitat loss each year, more specifically, loss of forests. Eschenbach found that there were several waves of extinctions. There was a wave in the 1500s, one wave in the 1700s, and a third wave into the 1800s and 1900s. Eschenbach discovered that the number of birds and animals that had gone extinct in the last 500 years was actually 190, sixty-one mammals and 129 birds. So much for the infamous Silent Spring, Rachel Carson’s book, that started the green revolution against DDT and its eventual banning. Springs are never silent in our forests; there are plenty of birds chirping year round.
He also found that, from these 190 species, many island species had gone extinct from “introduced species.” When he excluded those species, to his surprise, in the last 500 years there had been only 9 species that had disappeared, 3 mammals and 6 birds.
Eschenbach enumerated the nine species that had vanished and perhaps why they no longer exist:
1. An antelope hunted by European settlers around the 1800s
2. Labrador duck (shooting and trapping, overharvest of eggs)
3. Algerian gazelle (“extinction was assumed from a single skin purchased in a market place in North Africa in 1894 and from an adult male skull; we know nothing else about it”)
4. North Carolina parakeet (hunted to death for food, for their prized feathers worn on hats; beekeepers also hunted the parakeets because they ate bees)
5. Slender-billed grackle (lived in marshes of Mexico that were drained; total destruction of habitat, any species would go extinct from that)
6. Passenger pigeon (the most prolific birds in the U.S.; extinct from extensive hunting and disease; we hunted them on a large scale, “thousands were brought by trainloads to shoot them where they roosted”)
7. Colombian grebe (predation by introduced rainbow trout)
8. Atitlan Grebe (predation by the large-mouth bass)
9. Cotton tail rabbit (“three specimens collected in 1991 in a small area in Mexico, when they looked back, there were none; nobody knows why they were extinct”)
Based on this record, the conclusion that can be drawn is that when “European species met native species, native species usually died.” Predation by another species is the number one cause of extinction. For example, 95 percent of bird species on islands were killed by alien species. When European species met with Australian species, there was a massive die-off but it was a one-time event, said Eschenbach. Only one bird went extinct from habitat destruction that can be pinpointed to draining a marsh. “Wilson said that 39 extinctions a year occur from habitat loss,” added Eschenbach. Taking his formula into account, we should have seen during “the last century over 1,000 extinctions.”
Eschenbach continued that Wilson explained why his formula was not accurate at all – “50 years must pass before we know that a species is extinct.” His second explanation was that “species don’t go extinct immediately,” they may take up to 100 years to happen due to “exponential decay.” The problem with that theory is that “we still should have seen 600 extinctions by now and we’ve seen none,” Eschenbach concluded.