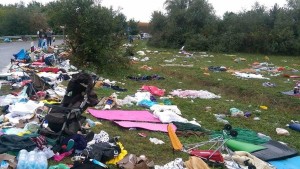 Photo: Polish blogger Kamil Bulonis
As I look at photos posted by witnesses at the Italian/Austrian border, Serbian/Hungarian border, and various train stations around Europe, I am wondering who is going to clean the mountains of trash left behind for miles and miles, as far as the eye can see, by the “refugees” from the Middle East.
“Why has everyone, from everywhere and all at once, decided to start heading towards Europe, five years into the Syrian civil war? This must be a manufactured mass migration.” 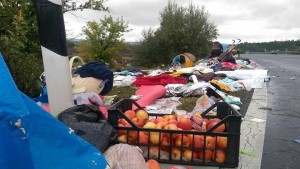 Photo credit: Kamil Bulonis
It is not what the refugees used on their journey, but what they left behind unused – discarded Red Cross packaged water, crates of peaches, untouched packaged food, unopened baby diapers, brand new strollers, car seats, toys, and other necessities for someone traveling with a baby. Since these items were left behind, it is obvious that there were no babies among them.
Videos are coming in from various regions showing Muslim men fighting, throwing rocks and chairs at each other, breaking windows, throwing feces, blooding each other’s noses in vicious fights, Shia fighting the Sunnis, the same centuries old senseless religious tribal animosity and hatred.

Photo: Kamil Bulonis
Refugees have taken over Greek Islands, turning them into a gang-like war zone. Greeks are afraid, hiding in their homes, unable to go to work, or to take their children to school. There is no respect for private property and there is no civilized propriety. They are burning cars and flags, throwing feces at passing cars and at people unfortunate enough to be in the way.
A witness at the Italian Austrian border, a Polish travel blog writer, describes circumstances of horror. “This huge mass of people, but these are absolute savages … Vulgar, throwing bottles, shouting loudly, ‘We want Germany.’… But is Germany a paradise now?”
“I saw how they surrounded a car of an elderly Italian woman, pulled her by her hair out of the car and wanted to drive away in the car. They tried to overturn the bus in which I traveled myself with a group of others. They were throwing feces at us, banging on the doors to force the driver to open them, spat at the windshield. How is this savagery to assimilate in Germany? The bus is now damaged, covered with feces, scratched, with broken windows.” His group had to travel with Italian police escort from then on. He described the entire area as a war zone. 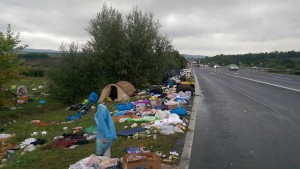