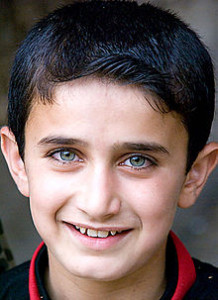 Yazidi boy in Iraqi Kurdistan
August 2014 Photo: Wikipedia
The leftist charlatans with their fake “war on women” movement are deafly silent in the face of a real genocide, the deliberate and brutal torture and killings of Christian men and women. Yazidi women and girls are kidnapped, raped, and driven into a life of slavery to ISIS as forced converts to Islam.
A small army of resistance is fighting the scourge of ISIS, in a valiant attempt to save what is left of their Assyrian tribes and of their women. ISIS is bent on eradicating them, their religion, their ancient culture, and any archeological remnant of their history. Their churches are destroyed while ancient artifacts and monuments are blown up. Syriac Orthodox Patriarch Ignatius Aphrem II said that “forced displacement on the basis of religious beliefs, be it Islam or Christianity, is a crime against humanity,” referring to the war crimes inflicted upon his people by ISIS in Mosul. http://unitedassyrianappeal.org/
Pope Francis spoke in 2014 about the Armenian genocide during Mass in the Armenian Catholic rite at St. Peter’s Basilica in Rome. Church leaders and the Armenian President Serzh Sargsyan were in attendance. He spoke about humanity witnessing “three massive and unprecedented tragedies” in the 20th century. “The first, which is widely considered, ‘the first genocide of the 20th century,’ struck your own Armenian people,” he said. The Nazi Holocaust and Stalin’s mass killings were followed by other genocides in Cambodia, Rwanda, Burundi, and Bosnia.
In 2015 Pope Francis mentioned three “massive and unprecedented tragedies” of the last century, the “Great Crime,” the methodical genocide of Armenian Christians who “were killed because of their faith,” and the “atrocities of the Nazis and of the communists, along with other mass killings…” http://en.radiovaticana.va/news/2015/04/12/pope_focuses_on_divine_mercy_in_mass_for_armenians/1136249
As Christians, it is our duty and responsibility to keep alive the memories of those killed, the Pope said. “Concealing or denying evil is like allowing a wound to keep bleeding without bandaging it,” Pope Francis continued.
BBC News reported on April 12, 2015 that Turkey was angry with Pope Francis’ description of the mass killings of Armenians under Ottoman rule in WWI as “genocide.” Turkey plays down the genocide as smaller numbers of deaths resulting from the WWI clashes in which ethnic Turks have also suffered.
Most Western scholars regard the 1.5 million Armenians civilians, who were deliberately deported between 1915-1916 to desert regions where they succumbed to starvation and thirst, as genocide. Countries like Belgium, Canada, Argentina, France, Italy, Russia, and Uruguay recognize the mass killings of Armenians as genocide. http://www.bbc.com/news/world-europe-32272604
For the first time, Turkish Prime Minister Recep Tayyip Erdogan offered condolences in 2014 to the grandchildren of the Armenians who were massacred in 1915. This year marks a century since the atrocities were committed, and, until all countries recognize that the genocide had occurred, it is an incomplete mourning exacerbated by denial stories to this day. http://www.theguardian.com/world/2014/apr/23/turkey-erdogan-condolences-armenian-massacre
Why were Armenians massacred by the Turks? To understand the reason, you must understand who the Armenians were, how, and why they lived under the Ottoman Empire, and their status as non-Muslims, “non-believers,” and second-class citizens.
Armenians are ancient people who lived in Anatolia some 2500 years ago. They had their own distinctive alphabet and culture. There are 6 to 7 million Armenians today, half living in the Republic of Armenia, while the rest are scattered in the U.S., Russia, France, Lebanon, and Syria.
In the year 301 A.D., the King of Armenia was the first ruler to adopt Christianity as the official state religion, even before the Roman Emperor Constantine’s conversion to Christianity. Captured by the Ottoman Empire in the 15th century, Armenia was absorbed into the Islamic Ottoman Empire, along with a large swath of European lands. As subject of the Sultan, Armenians had less freedom, had to pay higher taxes, were discriminated against, and were not allowed to serve in the military.
Unhappy with the second-class citizen status, by the end of the 1800s, Armenians demanded equality. In the 1890s the Bloody Sultan who was presiding over a weak government, used massacres as a way to maintain law and order. In 1894-1896 200,000 Armenians were killed during the Hamidian massacres under the rule of Abdul Hamid II, a foreshadowing of what was to come in 1915. http://www.armenian-genocide.org/hamidian.html
When the Young Turks forced the Sultan out in 1908, Armenians were allowed to serve in the military. In 1912-1913 the Christian regions of Greece, Serbia, and Bulgaria gained their independence from the Ottoman Empire.
According to Vahaken Dadrian, Director of the Genocidal Research at Zoryan Institute, as quoted on a film aired on PBS, http://asbarez.com/133128/acclaimed-armenian-genocide-documentary-to-air-on-pbs/
“For the first time in recent history, the glorious Ottoman army suffered a major military defeat at the hands of their former subject-nations, Greeks, Bulgarians, and Serbs,” losing in two weeks 75 percent of their former European territories. http://en.wikipedia.org/wiki/Vahakn_Dadrian
The despair borne by such a loss in the Balkans gave rise to a deep hatred against Christians, inflamed by Ottoman refugees’ stories, refugees thrown out of Christian lands, turning angry Turks against their indigenous Christian population, the Armenians – “Revenge, revenge, revenge, there is no other word.”
Ambassador Henry Morgenthau published in 1918 his personal account of the Armenian genocide. Chapter 24, The Murder of a Nation, describes in grizzly detail how Armenian men, who were formerly soldiers and cavalrymen in the Turkish army, were stripped of their arms and transformed into road workers and “pack animals.” Carrying heavy loads onto their backs, these men were whipped and bayonetted by the Turks into the Caucasus Mountains, sometimes waist-deep through snow.

“They had to spend practically all their time in the open, sleeping on the bare ground. … They were given only scraps of food; if they fell sick they were left where they had dropped,” while the Turks robbed them of their possessions and their clothes. “Squads of 50-100 men were taken in groups of four, marched to a secluded spot a short distance from the village,” they were stripped naked and shot, having been forced to dig their own graves.

Morgenthau described the fate of an entire Armenian regiment sent to Diarbekir. Agents notified Kurdish tribesmen to attack and kill these weak and starved soldiers “that they might gain that merit in Allah’s eyes that comes from killing a Christian.”

Ambassador Morgenthau explained how “throughout the Turkish Empire a systematic attempt was made to kill all able-bodied men, not only for the purpose of removing all males who might propagate a new generation of Armenians, but for the purpose of rendering the weaker part of the population an easy prey.”

When thousands failed to turn in weapons, the Turks ransacked churches, desecrated altars, marched the naked men and women through the streets, letting them be whipped by angry Turkish mobs. Those imprisoned who did not manage to flee into the woods and caves were subjected to the “bastinado” torture, the beating of the soles of the feet until they burst and had to be amputated.

Crucifixion, pulling of fingernails, of hairs, of eyebrows, tearing of flesh with red-hot pincers, and then pouring hot oil into the wounds were some of the barbaric methods of torture drawn from the records of the Spanish Inquisition.

Torture was just the beginning of the Armenian atrocities. What was to come was the actual destruction of “an entire Armenian race” by deporting it to the south and southeastern part of the Ottoman Empire, the Syrian Desert and the Mesopotamian valley. Morgenthau said, “The Central Government now announced its intention of gathering the two million or more Armenians living in the several sections of the empire and transporting them to this desolate and inhospitable region.” They knew they would die on the way of thirst, starvation, or murdered by “Mohammedan desert tribes.”

The deportations took place through the spring and summer of 1915. The entire Armenian population of villages was ordered to appear in the main square, sometimes with little time to prepare, their homes and possessions confiscated for “safekeeping” and then divided among Turks. Once the deported Armenians had traveled several hours, they were attacked and killed in secluded valleys by Turkish peasants with clubs, hammers, axes, scythes, spades, and saws.

The “caravans of despair” originated in thousands of cities and villages in the Ottoman Empire. Ambassador Morgenthau described how village after village and town after town were emptied of its Armenian population and, in six months, “about 1.2 million people started on this journey to the Syrian desert.” He believed it absurd that the Turkish government claimed to deport Armenians to “new homes,” the real intent was extermination. He concludes, “The details in questions were furnished to me directly by the American Consul in Aleppo, and are now on file in the State Department at Washington.” (Ambassador Morgenthau’s Story: A Personal Account of the Armenian Genocide, Henry Morgenthau, Cosimo Classics, New York, 2010)

Henry Morgenthau Sr. (1856-1946) “details how Turkey fell under the influence of Germany and how this led to the Armenian Genocide. In a trial run of the extermination of the Jews, the Germans orchestrated the murder and exile of the Armenians from Turkey, with ‘Turkey for the Turks’ as a rallying cry. The similarities to the Holocaust are chilling.”

Also chilling is the recent discovery made by Stefan Petke of the Technical University of Berlin who uncovered rare WWII footage that documents the existence of Muslim units (The Free Arab Legion) in the Nazi army who were used as ‘working soldiers’ because they “were a complete failure in the battlefields of Tunisia in 1943.” http://www.ynetnews.com/articles/0,7340,L-4645922,00.html
The Armenian genocide, the Nazi Holocaust, Stalin’s mass starvation of his own people seems forgotten because schools spend no time discussing the atrocities committed. The good people of the world turned a deaf ear then just like they are doing today. The Ottoman/Islamist ISIS massacre against Christians continues to this day in Iraq and the good people of the world are doing little to help the victims.