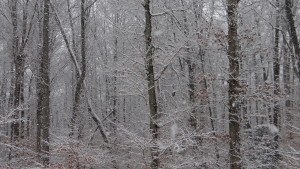 Photo: Ileana Johnson 2016
If I told someone that a dusting of snow brought to a complete standstill traffic on the highways and interstates surrounding Washington, D.C., the capital of the most powerful country on the planet, they would probably think that I was joking.
The beautiful sun-shiny day started with cold temperatures but nobody would have believed that by 6 p.m. the commuting life in the surrounding suburbs of D.C. would grind to a halt, so much so that a major highway had to be closed.
I thought it was strange that, in light of the forecast of one inch of snow for the evening, there were no plows in place or salt trucks anywhere along the roads I traveled. I-95 N was crowded as usual, made worse by an overturned eighteen wheeler on the ramp to Fairfax.
The snow dusted the roads already by 6 p.m. and, turning from hwy. 286 onto hwy. 123, my car slipped on ice and it took a few corrections before I could control my vehicle. Everybody was driving slowly, 30 mph, better safe than sorry. Again, no plows in sight.
Nine miles later I came to the top of the Occoquan Bridge. It became painfully obvious to all drivers that it would be impossible to slide down the steep incline onto the bridge without overturning vehicles or a major pileup. Everyone stopped and traffic jammed for miles.
I waited patiently for a sign of VDOT presence. After I realized that was not going to happen, I called 911 and reported that traffic has stopped on hwy. 123, a major thoroughfare. A few minutes later, three fire trucks showed up, asking everyone if they were hurt. They could not understand why the roads were not treated either.
Six hours after I left Fairfax, on a stretch of maybe 14 miles, we were finally able to clear the bridge and traffic moved. But that was not the end of the ordeal. As we pulled onto I-95 South, commuter traffic was moving slowly on all three snowy lanes. I-95 North was also clogged with traffic and barely moving. I was elated but my joy was short lived. Once I got on the ramp past Woodbridge, the road was really iced and cars were sliding left and right into each other.
Hwy. 1 was much worse. Traffic was virtually stopped going North and moving very slowly going South. With temperatures below freezing, turning onto side roads or neighborhoods was like turning onto an ice skating rink.
By the grace of God, I reached my home in one piece, thanking my guardian angel for my fortune. Who knew that a 27-mile journey would turn into a six hour ordeal? I could have driven to Ohio in six hours.
This dusting of snow that paralyzed the D.C. suburbs in northern Virginia was a metaphor for the government sclerosis, an incurable condition. The Virginia Department of Transportation (VDOT) has failed the taxpayers again in a big way. I shudder to think what is going to happen this weekend when meteorologists forecast over one foot of snow.
.