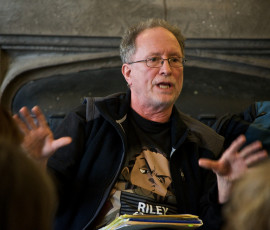 Bill Ayers (Wikipedia photo)
An interesting debate, sponsored by the Young Americans Foundation, took place on February 3, 2016 at the University of Michigan between author and film producer Dinesh D’Souza and the progressive retired professor Bill Ayers, a moderated debate with Q & A watched on line by approximately 3,000 Americans.
Even though Dinesh D’Souza prevailed in his rational and academic arguments, inserting his brand of intelligent and at times self-deprecating humor that he is famous for, his debater, the infamous and no so subtle “unrepentant terrorist” Bill Ayers, who bombed or plotted to bomb federal buildings in the 70s, the audience applauded occasionally at his remarks.
Unlike Dinesh D’Souza, who was professionally dressed, Bill Ayers was sporting a black with white lettering t-shirt that was advertising the Black Lives Matter logo made infamous by protesters on the payroll of a certain billionaire, protesters who disrupted civil life and learning on campuses across the country with insane segregationist demands, and violent protests in certain cities around the country that resulted in massive destruction of property, fires, looting, and chaos. Additionally, Bill Ayers was wearing a proletariat chapeau as if he had ever been part of the working class that suffered at the hands of communism in the 20th century.
D’Souza was a far more intelligent, humble, and knowledgeable academic than his debater. A section of the audience agreed with Bill Ayers when he described the national militarization of police, when he named Samantha Powers for starting the war in Libya and the Arab Spring, when he criticized Common Core for its mindless standardization and testing, and when he criticized Bill Gates. Ayers questioned what gave Bill Gates the right to become Superintendent of America’s Education System and of the health of the globe.
On the question submitted prior to the debate on the impartiality of the criminal justice system in our country, D’Souza pointed out that such injustice of the criminal justice system was on full display on that very stage.
Dinesh D’Souza served 8 months in nightly confinement for giving $20,000 in illegal campaign contributions to a friend, a violation of the law in New York, while Bill Ayers, D’Souza added, bombed the Pentagon and other government buildings, and never served time nor repented for his actions and crimes.
“The inequity of our criminal justice system is on full display right on this podium right here,” he said. “So I gave $20,000 of my own money over the campaign finance limit. I got 8 months in overnight confinement. You bombed the Pentagon and tried to bomb all kinds of other things — how much time did you do in the slammer?”
Charges against Ayers were dropped based on a technicality – the government failed to obtain proper warrants for surveillance against the Weather Underground. Ayers remarked rather obtusely that Dinesh’s crime was much bigger than his crime because Dinesh tried to influence a politician.
“The fact is that you admitted to committing a felony, which you did. And it’s a felony pretty serious in a democracy,” Ayers said. “It was an attempt to buy an election.”
D’Souza noted that Democrat fundraiser Sant Singh Chatwal committed a similar campaign finance violation but received no prison time for his crime. D’Souza reasoned:
“Here’s my point. Yes, justice is a matter of, ‘Did you break the law?’ But it’s also a matter of, ‘Does the penalty fit the crime? Do other guys who do the same thing get roughly the same offense?’ Under the Obama administration I will say that progressive justice is a complete sham.”
On the issue of illegal immigration, D’Souza explained that “Immigrants are voting with their feet against their own culture…for one [country] that is…better.” But we cannot take the whole world in by leaving borders open. He pointed out that those who come into the new club, [the United States], “must abide by the rules and must become one of us.”
Speaking with distinction, thorough knowledge of history and economics, conviction, and articulation, D’Souza mentioned his friend from India who said that “he wanted to immigrate to a country where poor people were fat,” alluding to the generous welfare system in this country.
On the remark and question from the audience that All Lives Matter and that he is a “con” man, Ayers tried to explain why Black Lives Matter more at the moment, because cops are indiscriminately killing black people. To make his point, he used the Jewish/Nazi Holocaust as an example why at the time, saying Jewish Lives Matter, would have been important.
However, D’Souza clarified why the comparison is faulty and offensive. Jews were not armed, they were sitting ducks in the face of the armed National Socialists’ (Nazis) Gestapo while black people who are killed today by both white and black cops are usually heavily armed and are pursued or caught in the process of committing crimes.