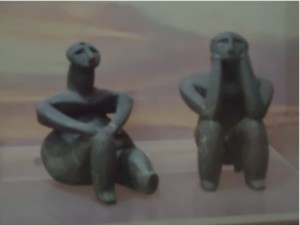 Cernavoda statues, Thinker and his companion Photo: Ileana Johnson 2012
I asked Mircea Brenciu what happened to the education in Romania as it evolved from communist indoctrination to so-called western style education in 25 years. Although some young people earned international acclaim in science and mathematics, education in general has been a profound disappointment, he added.
Brenciu is a firm believer that the lack of spending in education is a direct reason for the pathetic performance. He explained that Romania continues to place last on education spending, behind countries like Bulgaria, China, and Indonesia.
Despite politicians’ promises to make education a priority, financing it has remained at the bottom when compared to schools’ needs and to allocations that other countries have made in education. He illustrated the dearth of investment in “human capital,” a.k.a. education, with a statistically low 2.5% of the national budget in 2013, 3.2% in 2014, and 3.7% in 2015.
Even though politicians have introduced a benchmark of 6 percent for education, according to the National Institute of Statistics (INS), investment in education has never exceeded 4 percent. Yet every government in power and every prime minister have pledged to the voting population that education was a priority. Remus Pricopie, former Minister of Education (2012-2014) reported in 2014 3.2 percent of the budget for expenditures in education.
I happen to disagree with Mircea Brenciu that spending more on education, throwing more money at schools, is going to make a difference in student achievement, performance on tests, or long-term retention and learning.
I don’t think the communist party spent outrageous amounts to indoctrinate the youth yet, in general, excluding the worthless classes of Scientific Socialism, Socialist Philosophy, and other such courses, students received a well-rounded education even though they had no labs for experimentation in physics, chemistry, or biology.
When I arrived directly from the socialist/communist state to the United States, I was shocked how ill-prepared most students and their teachers actually were. The depth of knowledge acquired by most eastern block students was superior when compared to the education of most Americans. It is also true that American students were encouraged to think individually and outside the box instead of emphasizing the collective. Collectivism stunted creativity and inventiveness.
Since Americans have been spending thousands of dollars per pupil to improve achievement and raise test scores, in the face of the fact that test scores do not compare well to other countries, it is obvious that throwing more money at education does not increase student performance or test scores. There are other variables such as parental dedication and involvement in their children’s education and two-parent families that are also very important.
I understand, in many villages in Romania, where the aediles had not used the funds judiciously, or did not receive any funding for education, it was hard to learn in a classroom whose roof was leaking, had no heat, or the school had not been completed or repaired for habitation.
The most adversely affected by unemployment are high school graduates with a rate of 8.1 percent unemployment when compared to those with a college diploma (5.1%). By age, the group of 15-24 year-olds have 23.7% unemployment rate. Among the 25-34 year-olds unemployment was much smaller, 7.75 percent.
It is obvious to Brenciu that there are special interests at play that ignore the national interest, resulting in diminished education possibilities. Having a Parliament is great, however, the voters, informed, misinformed, or deliberately ignorant, get the politicians they elect. There is no such thing as the best party in power. Romanians and people in general should run like crazy away from a party or a politician who wants to dominate political life. “Did we not have for over 50 years a ‘unique’ party which led us, against our will, to the highest peaks of socialism?”
The content of education has become globalist, emphasizing global citizenship or preparation for such global citizenship. The elites and the United Nations’ non-governmental organizations (NGOs) are working overtime everywhere to institute the sought-after socialist global control.
To me, it was refreshing to see so many churches mushroom around the country, and a comeback of faith after five decades of atheism under Ceausescu’s socialist/communist dictatorship. State funds were allocated to repair and rebuild many churches. But Romanians seemed to resent the church leaders and priests who lived lavish and luxurious lives when compared to most Romanians, while hospitals and schools were not funded adequately by the state and people died as a result.
I noticed many museum and architectural gems in a sorry state of neglect, decay, and rust. Priceless sculptures and mosaics were drowning in dust at Tomis and marble Etruscan sarcophagi were used as trash bins outside the Tomis Museum in Constanta.
Educators have told me that the curriculum is not teaching students so much about their national heroes anymore. History and national pride have been definitely marginalized in the quest to become “European citizens” as quickly as possible. The dumbing down of education has showcased depravity and immorality, denigrating good moral values, national identity, and pride in Romanian-ness. The noble ideals of love for their country, of patriotism, of respect for historical facts and for their ancestors, have disappeared from the curriculum, replaced by defeatism and shame for one’s ancestry.
Many well-educated and average Romanians sought employment elsewhere in the EU “openness” where the pay was commensurate with education, training, and experience, leaving a huge vacuum in Romanian key sectors of labor. Why work for 300 euros in Romania when you can get five times the pay (1,500 euros) for the same type job in the European Union and the cost of living is similar?
TO BE CONTINUED