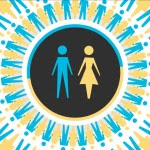 The media has lately jammed the air waves with its newest indoctrination tactic driven by various United Nations organizations, the “unconscious bias” and, more specifically the “invisible race bias,” and the “invisible gender bias.” Training workshops in “thought police” are taking place around the country and around the globe to “assist” people overcome such unconscious bias and “nudge” them in the right direction.
Who would have thought that the song heard around Europe during World War II, “Die Gedanken sind frei “(Thoughts are Free), would become “verboten” in the 21st century, as bureaucrats are trying to control our very thoughts? The song expressed the human defiance to their Nazi captors, saying, you can imprison us in concentration or in prisoner of war camps but you can never hold our thoughts captive or hostage.
In preparation for the International Women’s Day, on March 8th, the International Office of Migration, the United Nations Office at Geneva (UNOG), the Office of the United Nations High Commissioner for Human Rights (OHCHR), and the Permanent Mission of the United States are hosting on March 7 in Geneva, Switzerland, “an event under the auspices of the Geneva Gender Champions Initiative/network, to discuss invisible gender bias and its impact on gender equality.”
The Geneva Gender Champions is a non-governmental organization (NGO), an international lobby dedicated to “gender equality and parity.” http://genevagenderchampions.com/
Euphemistically named, “Planet 50-50 – Tackling Invisible Gender Bias,” this event will be facilitated by Tanya M. Odom, “an expert in inclusive leadership.” Inclusive leadership sounds great on paper, “all stakeholders have a seat at the organizational table,” but some people are not leaders at all, they are followers, no matter how much we would like them to lead. Leading from behind is not leadership. http://www.iom.int/news/iom-unog-unohchr-and-us-host-geneva-event-tackling-gender-bias
Global leaders (everything is now global, including thought policing) will share their personal experiences in dealing with “cultural bias and with organizational structures and practices that inadvertently benefit men and disadvantage women.”
Interactive sessions will teach participants how to “raise awareness of recent advances in neuroscience and organizational psychology and learn how they can help to inform actions to tackle invisible gender bias.” I don’t know about you but this sounds very Orwellian to me.
Just because men and women are biologically different and thus physically differently-abled, have different qualification, abilities, and experience, they must be equal. And the United Nations and its bureaucrats must re-educate your brain and your thinking with mind-bending techniques to make you agree with them.
The idea that we should somehow manage and control our “unconscious bias” in order to create a progressive diversity in the workplace smacks of mind control in order to satisfy the political correctness crowd that has gone berserk.
This “unconscious bias” was formed, according to experts, as a necessity for survival, in response to physical and property safety, identity, or sense of existing. It is a primal biological response to a threat and it is important to our survival. But, if it does not meet with the approval of experts, it must be controlled and changed through careful indoctrination. This “belief or attitude in our heads” must be rehabilitated.
Even though we use this discerning bias to make sense of the world around us and make decisions that seem safe, valuable, and competent, unless it meets with the approval and criteria of the PC crowd, it must be rewired. They know best what a positive bias is and what constitutes a negative bias. They can let us keep our positive biases but they must eradicate the negative biases from our brains. After all, it is not our fault that we harbor such negative biases, we are told by very wise progressives, it is the fault of our parents who instilled an “inflexible or negative conscious or unconscious belief about a particular category of people.”
And if we have biases as an instinct reaction to our primal biological and wired urge for safety, identity, and wellbeing that must be changed as well. The human brain is wired to categorize and distinguish “safe” from “dangerous” but, that is inappropriate as well. Things are only dangerous or safe if progressives say they are dangerous or safe. We cannot allow our brains to make those judgments.
Pre-established filters such as perceptions, assumptions, interpretations, or preferences that we developed as human beings have created our biases via parents, belief system, values, our culture, extended family, schooling, teachers, and the church. In this process, according to progressive experts, we have created “blind spots” which must be brought to light and sanitized.
If we think divergently from the progressive ideology, if we disagree with failed multiculturalism, with open borders, with endless illegal immigration, if we think that rewarding failure, mediocracy, and jobs based on something other than intellectual and physical ability is counterproductive, that men and women are physically and biologically different no matter how much progressives tell us that we are equals, if we think that everyone has equal opportunity in this country and should take responsibility for their actions, we are “unconsciously bias” and must be aggressively indoctrinated and our negative biases erased.