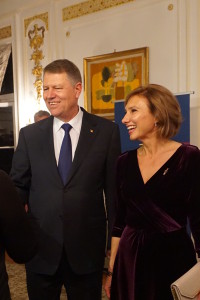 President Klaus W. Johannis and wife
Photo: Ileana Johnson, April 1, 2016
Yesterday a select group of American and Romanian citizens were invited by the Romanian Ambassador, George Cristian Maior, to meet the President of Romania, Klaus Werner Johannis, and his wife, Carmen, who were in town for the two day nuclear summit in Washington, D.C.
It was an honor to meet the Romanian President – my Dad, who died in 1989 as the result of the communist tyrannical state, seven months before Ceausescu’s regime was toppled, would have been proud of what I am doing, writing, speaking, and promoting liberty, the beautiful and fascinating country of my birth, its rich history, its people, and its rich cultural traditions and heritage.
A leader of the Democratic Forum of Germans in Romania (2002-2013) and of the National Liberal Party (2014), Johannis was a high school teacher and school inspector before entering politics as the mayor of the city of Sibiu in 2000. He was re-elected in a landslide in 2004, 2008, and 2012. He turned the city of Sibiu into Romania’s number one tourist destination, voted the European Capital of Culture in 2007. Johannis, fifth President of Romania, assumed office on December 21, 2014.
President Johannis is a Transylvanian Saxon, a German minority who settled in this part of Romania in the 12th century. He is the fourth president of German origin from Eastern Europe in the post-communist era, after Slovakia’s Rudolf Schuster, and Hungary’s Ferenc Mádl and Pál Schmitt.
Johannis’ parents, sister, and niece have moved to Würzburg in 2014 but he chose to stay in Romania where his ancestors had moved to 850 years ago. A graduate of Babeș-Bolyai University in Cluj-Napoca in Physics (1983), Johannis taught high school Physics in Sibiu at the famous Samuel von Brukenthal Gymnasium, the oldest German-speaking school in Romania. Johannis and his English teacher wife, the former Carmen Lăzurcă, have no children, and are members of the Evangelical Church of Augustan Confession in Romania, a German-speaking Lutheran church in Transylvania.
After the Romanian National Anthem, “Deșteaptă-te, române!,” the Ambassador George Maior welcomed the president and introduced to him the very politically involved Romanian intellectual community from Washington and the surrounding states.
President Klaus Werner Johannis’ brief address to the crowd of 150 specially invited guests and the Romanian press traveling with him centered on the scope of his visit. He thanked the Romanians gathered to meet him and explained that it was his idea to meet the Romanians living in the U.S. “I thank you that you came,” he said.
“The conference addressed the nuclear security which preoccupies us, especially if we take into account the nuclear terrorism that threatens all of us.”
He talked about the many meetings he attended, “We were seen at the White House last night, met with President Barack Obama, Vice President Biden, and other dignitaries.”
“We have a strong strategic partnership with the United States, politically, militarily, and economically.” He explained that there are over 100 military exercises planned with Romanian and American soldiers and that there is strong collaboration on security issues.
He admitted that on the economic front there is room for more American and Romanian investors. “You are investing here but we wish that you were in the country, but you can play a role of ambassadors for Romania. You came here for different reasons, jobs, family, career, etc. Because you came here tonight, it is evidence that your heart is in great measure at home. Take Romania’s message to the last village in U.S. that we want to go further together.”
A reception followed during which President Johannis and his wife graciously met everyone briefly and took pictures with those in attendance.
I am an American by choice but there is always Romanian blood in my veins and love for Romania in my heart and I hope the two countries will remain friends for a long time.