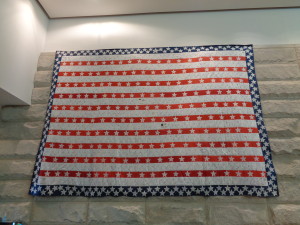 Pentagon quilt 9/11 Photo: Ileana Johnson 2016
I don’t know why but I choke and tear up when I hear both the Romanian and the American National Anthems.

I see in my mind’s eye all the Romanian faceless heroes who died to free us from the oppression of communism and all the American soldiers who perished in their selfless attempts to free so many people they never knew around the world. I feel a deep sense of gratitude; I can never repay their sacrifice but I can honor them by preserving their legacy.

I have a deep respect for the American flag and I fly it every day with pride. If the wind, rain, and sun tear or discolor it, I retire it with proper honors and purchase a new one. I know the sacrifice of living under tyranny and I abhor the American ingrates who trample and disrespect our flag.

My husbnd served both in Iraq and Afghanistan and brought back a folded American flag which was flown over Kabul. This flag has a place of honor in my house. I understand what he had to endure to serve under our beloved flag.

But his suffering pales by comparison with thousdands and thousands of American soldiers who returned in a coffin in the cargo hold of an airplane, saluted, and buried with honors. Their sacrifice and faces were quickly forgotten.

Many veterans died waiting to be seen in the shameful VA clinics. After all, what is a little wait of seven months if you consider that waiting in line is just like waiting in line for a ride at Disney, said the callous VA chief.

One thought on “Memorial Day Respect for Freedom”