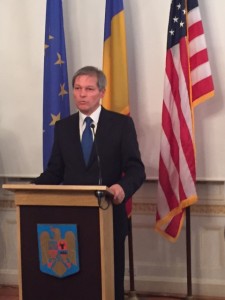 Dacian Ciolos, Prime Minister of Romania
Photo: Ileana Johnson 2016
The Prime Minister of Romania, Dacian Ciolos, following a visit to Washington, spoke at the Romanian Embassy to specially invited members of the influential Romanian community from the Washington area.
His excellence, George Cristian Maior, Romanian Ambassador to Washington, welcomed the Prime Minister, his cabinet, the Minister of Foreign Affairs, and all invited guests.
The evening signaled the improved relations between the two countries in matters of security, defense, and economic cooperation. Ambassador Maior mentioned that meetings explored new ways to expand bi-lateral relations and partnerships between the two countries.
As former European Commissioner for Agriculture and Rural Development (2010-2014), Prime Minister Dacian Ciolos mentioned that he had visited the United States before and has met with the Romanian diaspora. His heart swelled with pride hearing Romanian spoken thousands of miles away from home.
The objective of his visit was to confirm Romania’s interest in strengthening cooperation with the United States and the strategic partnership which has already delivered results in terms of security and defense.
The Deveselu base in southern Romania inaugurated recently the operation of the anti-rocket shield SM-3. Prime Minister Ciolos described it as an important development not just for Romania and the U.S. but for the defense of NATO in the region. “We are ahead of Poland which is just now beginning the installation of another element of this shield.”
“We can say that we have become providers of security with United States’ help. This project shows, in my opinion, that, in a process of cooperation, we can take a project to completion with great success.” Furthermore, this endeavor became a national mission based on the fact that all parties in Parliament approved of it and supported its implementation; it was a “national consensus.”
Because Romania had such success in security and defense partnerships, Ciolos stated that his visit to the United States aimed to develop economic partnerships equally successful. “The best way to keep peace and security is to stimulate prosperity, meaning, economic development and investment.” Ciolos added.
Romania’s economic growth has been consistently in the top among European nations. “But we must do more to translate this economic growth into economic development and cooperation and to better manage our national resources.”
There are American investments in Romania but the potential can be improved since United States is in 11th place as an investor. We have success stories such as the Ford venture in Craiova. Ford just announced an investment of 200 million euros. Ciolos met in Detroit with Mark Fields, the CEO of Ford.
Ciolos had promises from a group of businessmen from Detroit who will visit Romania in the fall to make investment decisions.
The Prime Minister met with Vice President Joe Biden and discussed aspect s of security and defense, energy and economic cooperation at the Black Sea.
Ciolos met with Penny Pritzker, the Secretary of Commerce, “who knows well the economic situation in Romania,” in order to facilitate the presence of American companies in Romania. “I informed her of the reforms that we are currently making in Romania in order to attract economic investments.”
“I also met with the Agriculture Secretary Tom Vilsack. The undersecretary of agriculture is going to visit Romania in a few weeks,” added Ciolos.
“I am going to meet the secretary of energy with whom I am going to discuss the potential of off-shore drilling at the Black Sea but also in land exploration. We also want to explore investment in technology and in research in energy. Romania can become an important player in the Black Sea area and the southeast of Europe.”
“I hope these meetings will begin a new trust in our partnership. We must continue to fight against corruption and improve the efficiency of public administration. My government will make some reforms that I hope will be continued by the following administrations.”
Prime Minister Ciolos concluded by explaining to those present how the Romanian diaspora can vote in Romanian elections and he urged them to do so.