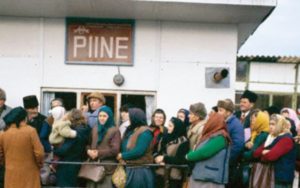 A bread line in the 80s
Photo credit: adevarul.com
The Ceausescu clan and their communist useful idiots were quick to remind us of what an enchanted life we lived under his leadership and how terrible life was under evil capitalism and how their people suffered under the boot of the bourgeoisie. We were so protected and full of hope under “mother” Elena and “father” Nicolae’s leadership, we were told ad nauseam, while the opposite reality hit us in the face every day.
Commies lied to us in order to cover up their mismanagement of the economy, the disastrous five-year plans, the gross misuse of the land, squandered resources, sold produce and grain to the west for hard currency while people were on rationing cards and hungry, and funds stolen from the treasury or from citizens accused under dubious circumstances of treasonous activities such as enemy of the proletariat. 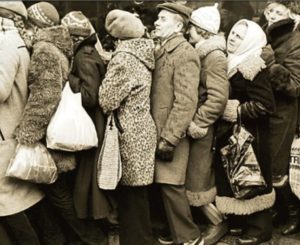