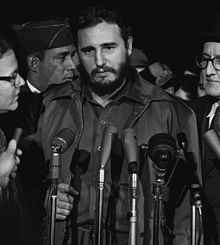 Forbes estimated Fidel Castro’s wealth at $900 million while the country he ruled with an iron fist, 11.39 million people, lived in poverty and dignified squalor under his boot. The deceased “El Comandante” Castro left behind a huge fortune, a private island called Caya Piedra, mansions, a marina with his private yacht called Aquarama, bank accounts, an alleged gold mine, and thousands of worthless Marxist speeches.
http://www.abc.es/internacional/abci-fidel-castro-herencia-201612021149_noticia.html?ns_campaign=gs_ms&ns_fee=0&ns_linkname=boton&ns_mchannel=abc-es&ns_source=fb

Celebrity guests who have enjoyed Castro’s lavish hospitality on the island of Caya Piedra included the Colombian novelist Gabriel Garcia Marquez and the French underwater explorer, Jacques Cousteau. Nothing but the best for western elitist visitors, they were never taken to the slums where Cubans were forced to live, playing dominoes and making beautiful music to soothe their trapped bodies and souls. http://www.dailymail.co.uk/news/article-2637927/Castro-commie-hypocrite-lives-like-billionaire-Hes-posed-man-people-But-new-book-reveals-Cubas-leader-led-life-pampered-hedonism-fortune-big-Queens.html

Why God would keep such an evil man alive to the ripe old age of 90 is a mystery. The longer he lived, the more people he tortured and kept chained to his utopian idea of how God’s free people should live.

Castro enslaved and oppressed his people for 59 years while giving them speeches about the wonders of Marxism and the evils of capitalism. He tortured and killed an estimated 15,000 of his own citizens who dared to object to his proletariat hell.
The lucky ones escaped to Miami and made a good life for themselves, others drowned at sea in ingenious and desperate makeshift vessels, trying to flee this Marxist paradise that kept them in chains spiritually, economically, ideologically, and physically.
After decades of brainwashing, Castro created a perfect police state of fear and terror, run by his henchmen, loyal to his failed ideology that rewarded only the top elites running this beautiful island. Evidence that this man was insane surfaced early in 1959 when he appeared in pajamas on black and white American television in his first public appearance in an interview with Edward R. Morrow. http://www.bing.com/videos/search?q=Morrow+interview+of+Castro&view=detail&mid=D10386F88FFC88BD551DD10386F88FFC88BD551D&FORM=VIRE
The main stream media liberals who adore dictators were quick to sing his praises, ignoring the glaring reality of his Marxism that ruined the lives of countless millions, stealing their potential wealth and any opportunity of a good life. Even “60 minutes” mentioned in its short biopic that he had brought education and medical care to his people. He did bring schooling of the Marxist indoctrination type and medical care for sniffles. Why have Fidel Castro and his family sought the best doctors, hospitals, and medical care in the U.S. and Spain instead of the clinics and hospitals in his own country?
The media is lauding and glorifying the killer Castro who has imprisoned other humans for their divergent political views, their faith which contradicted Castro’s atheism, and left many of his people on a starvation diet. If the MSM loves what Castro did for his people, why don’t they move to Cuba and seek medical treatment there?
Today the liberals in the media and academia are just plain communists disguising their communism under the euphemistic term of “progressives.” There is nothing progressive about forcing everybody under totalitarian government control without any possibility of choice and free will. It is regressive to control people to such an extent that they cannot leave their own country to pursue opportunities and freedom of spirit and body elsewhere – their island utopia becomes their prison.
I’ve never seen people fleeing from western, free market capitalism to communist nations. But history has shown, time and time again, that people fled oppression at all costs, even at the cost of being shot while crossing through Checkpoint Charlie, crossing the border from oppression to freedom, from east to west, including fleeing a beautiful tropical island where buildings and streets are so deteriorated and dilapidated that they look like they have an insidious cancer dripping with decay. In a way they do, the terminal cancer is called totalitarian communism. https://www.facebook.com/MiamiHeadlines/videos/445815272209280/
The intolerant and dishonest liberal media talking heads that commit journalistic malpractice by deliberately lying to the American public are just teleprompter readers who are verbally dancing on the graves of those who lost their lives at the hands of communist dictators like Fidel Castro. There is nothing worthy of acclaim about this man. He was not “awesome, great and inspiring.” Those are not the words to describe a Hitleresque sociopathic murderer.
All unethical western media praises for Castro’s regime are nothing but slaps in the faces of all Cuban Americans who have either lost family or had to leave their loved ones in the dead of night, sometimes not even saying good bye for fear that they may be discovered and arrested; they left with only the clothes on their backs, leaving their hard-earned possessions and wealth behind when this monster took power.
The media and public schools rarely discuss the “benevolent” dictator’s firing squads used to enforce compliance and discipline, to punish disloyalty, and to intimidate any possible opposition. Such “executions continued for decades.” http://babalublog.com/fidel-castros-greatest-atrocities-and-crimes/fidel-castros-firing-squads-in-cuba/
My Cuban friends, Alexis Maria E. and Silvio C. discern the reality of what Castro did to Cuba. I know exactly how it felt to flee your own country in search of freedom, to leave everything you’ve ever known and loved behind. Freedom has a very strong magnet and no man has the right to take lives and freedom away from others just because of divergent political opinions.