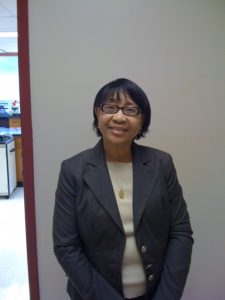 Mary Davidson, Ph.D.
Photo: Ileana Johnson
There were always oddities residing in and escaping from Mary’s large room on the second floor and storage area serving as biology laboratory and classroom. Strange and unpleasant odors and miasmas were wafting down the hallways from Mary’s biology lab, truly a room of curiosities that attracted some and made others flee for fresh air. She had freezers full of dead cats and frogs ready for dissection. When the formaldehyde smell was so overpowering and nauseating at the same time, we knew Mary and her students were preparing for dissection and the critters had been brought out of the freezers. We opened windows to air out the smell but, despite our efforts, the stench became part of our clothes, our skin, and our nostrils for that week.
There was a tarantula and a pet snake that kept escaping from their glass enclosures and terrariums. Students were always searching for them and finding them in strange places, dehydrated and hungry. Mary was always looking for someone to care for her many pets during vacations and to water her many plants which together resembled a giant Venus fly trap.
There were collections of pressed leaves and flowers gathered from the many trips around Lowndes County and the state of MS. An assortment of rocks stockpiled from trips to caverns was assembled by a few passionate amateur spelunkers who collected them during cave adventures. Soil samples, worms, moths, butterflies, cockroaches, and other insects, live and preserved, were gathering dust and making babies in dark places, in boxes all over the lab, and in the storage area.
Students were taught how to be responsible humans by doing two hours of work service a week for a specific teacher, a lab, or to clean the dreaded bathrooms and hallways. When they had to clean the nasty bathrooms, they were always more careful not to make them really dirty to begin with. Not hiring full time janitors also saved the school money. Some students got cushy assignments; they just had to help a certain teacher grade tests. Others were not so lucky.
Mary was a fantastic teacher and motivator and students loved her but, doing work service for Dr. D, was not exactly an easy assignment as students often had to clean the lab, the tools used, the beakers, and other glass jars. Cleaning the lab was a nightmarish proposition as nobody knew if the caged pets were loose or safely latched.
One day students had to clean cardboard boxes laden with former students’ projects, tightly taped and not labeled. Mary and a crew of four students were opening these boxes, like Christmas presents, never knowing what mysterious project would be inside, salvaging any glassware contained within, and throwing the rest in a large trash bin.
But one box was unlike the rest. Imagine the protagonists of the movie “The Mummy,” being chased by millions of beetles emerging from the sand and devouring everything in sight. Once this box was opened, hundreds of cockroaches began flowing over everywhere, on the floor, chairs, tables, and pretty much any surface available, including the soles of a female student who was wearing sandals – the roaches crawled in between her feet and the sandals. The students were paralyzed with fear and screaming from the top of their lungs.
Mary jumped into action, closed the two lab doors, and emerged from the storage area with two very large bottles of Raid. She sprayed them copiously into the air as if they were perfumed air fresheners. Laughing copiously as she twirled with the two spraying containers in hands, she reassured the students that “everything was fine.” Choking on Raid fumes, chemicals that no human should have breathed in a confined space, students followed the leader, a farm boy raised around pesticides who had more common sense, and fled the room. We can only hope that the escaped tarantula and other live pets in the lab made a good meal of some of the cockroaches killed by the Raid assault.
No matter how hard Southerners tried to exterminate this pest every month, cockroaches thrived because they survived on very little, like the book binding glue or their own excrement.
Mary passed away a few years later, a victim of metastasized melanoma, and I often wondered if her cancer marker was genetic or environmental. She had certainly exposed herself to so many chemicals on the farm in Woodland, as a graduate student working on a Ph.D. in Biology, and during her teaching career of twenty-two years. Students will always remember her with fondness, her scholarship, kindness, dedication, and infectious smile.