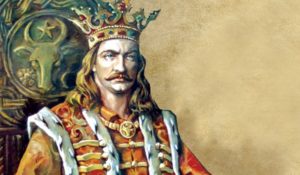 Stefan the Great, Athleta Christi, (1457-1504) Romanian ruler who fought the Ottoman Empire in 36 battles and won 34
Photo: descopera.ro
Empires come and go. The twilight of western civilization is not just a poetic idea, it is a painful reality. Liberals often say that they do not like to make broadly pessimistic pronouncements about the collective fate of civilization. Of course not, it might upset their blind followers who dwell in the haze of marijuana, hard-core drugs, immorality, decadence, and debauchery.

Anarchists are allowed to burn down towns, while police are told to stand down. ANTI-FA and BLM, fascist and racist organizations by any description, deface statues they don’t like and beat up others whose ideas they disagree with, proclaiming that they have a right to attack them for their opinions.

Young brainwashed generations are rejecting God, morality, their countries, their own skin color, their history, and everything that made our modern society most developed.

Terrorists are allowed to cause destruction and mayhem around the world yet those in power bring more into developed countries under the insane notion that they are protecting multi-culturalism and diversity and the U.N.-established “right” to migration anywhere they wish, regardless of borders and sovereignty.

The lessons of 9-11 and the unity against Muslim terrorist evil forces lasted as long as the clean-up ended, those innocents killed were buried, and the families recompensed from the 9-11 fund. Even the death of the 200 or so jumpers before the towers fell was sanitized by the leftist media because it was too much to bear and see.

The sacred ground containing the bodies of innocents slaughtered that day, who were never recovered, will be protected perhaps for a few decades. When a new generation of BLM and ANTI-FA snowflakes will decide that the monument is offensive to them, it will probably be torn down too.

Statues honoring Francis Scott Key, the lawyer and amateur poet who wrote our National Anthem, Christopher Columbus, derided by the left as an “Italian navigator, explorer, and colonizer,” Gen. Robert E. Lee, a war hero and veteran, were either destroyed, defaced, or vandalized by home-grown terrorists who would like to shut down any opposition to their fascistic behavior and ideas.

Mayors in places like Baltimore, Charlottesville, Dallas, and other highly liberal municipalities, took it upon themselves to rewrite history by ordering the removal of statues they deemed offensive, often in the middle of the night, while the rest of the citizens stood by in stunned disbelief. Bolsheviks and fascists smashed many statues, monuments, burned books and works of art they considered offensive and bourgeois and priceless artifacts were forever destroyed.

Muslim terrorists around the world are killing with gusto because they hate civilization and infidels but love the welfare in the countries they are rapidly occupying through demographics. Europeans and Americans are committing demographic suicide and the church is applauding, praising, and enabling the invaders. Islamists are successfully installing their seventh century theocracy called Caliphate and the powers that be in the western world seem to agree that it is the best path for their citizenry. Twenty-one centuries of civilization must have been a mistake which they aim to correct by national suicide.

Hiring practices favor the newly protected class to the detriment of Americans. My former two bank branches eventually fired all Americans in the last eight years and hired only Muslims with limited English skills. One recently lied and tried to talk down to me about economics and finance. She had been on the job for a week. I wondered how the large Spanish-speaking population banks with them.

You would be hard-pressed to find a medical professional, a taxi driver, a sales associate in a store, or an airport employee in the D.C. area who is not from the Middle East and speaking with a thick English accent, often incomprehensible. It is not racist or bigoted to state such a fact, even though liberals throw around such labels like confetti.

London was just attacked again, this time a bomb blew up on the metro. Numerous people were singed from the flash of the bomb that partially detonated in a Lidl shopping bag. I wondered how many more such terrorist attacks, whether by bombs, knives, or cars plowing into crowds, will eventually convince the EU that their globalist, multi-cultural plan of flooding the old continent with economic migrants from Africa and the Middle East has failed miserably and must stop the open borders, welcome all the flotsam and jetsam of Islamist refugees who have no intention of ever accepting western civilization or assimilate.

That is why the western empire is in its twilight and will eventually demise in the dustbin of history. And my people fought the Ottoman Empire for centuries. Much blood has been shed to keep them out of Christian lands. Now they are here to stay and fundamentally transform us because we let them.

3 thoughts on “Empires End in the Dustbin of History”