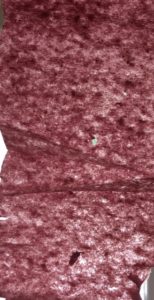 Huffing and puffing, I lug the large package of toilet paper from our local Costco into the house. It’s not that the price is better; I just don’t want to go to the store more often than I have to. I stood in lines enough during my twenty years of living under the boot of communism.
I am always tempted to ask the cashier if that’s enough toilet paper for the average food intake. I never do it because the cashiers are all foreign, barely speak English, and my meek attempt at potty humor would be met by strange stares.
I kept a pink sample of pink toilet paper I brought with me from our first trip back to Romania after communism had “fallen” 25 years earlier. The tissue looks like crepe paper with splinters of wood embedded here and there, visible to the naked eye and painful to the rear end. Progress after decades of dictatorial communism is very slow in some aspects and fast in others.
It is still an improvement from the years I grew up when toilet paper and other necessities Americans take for granted were so scarce, people lined up for blocks to buy a couple of rolls and many left disappointed when the month’s delivery ran out.
People carried emergency walking-around cash and jute expandable shopping bags just in case they ran into a long line which may have been formed for something they needed, i.e., toilet paper, shampoo, oranges, butter, bananas, flour, oil, and sugar. Nobody knew exactly what was on sale that day; asking people around did not help, they did not know either; eventually, as they inched closer to the window, they found out what was delivered that day that people lined up for blocks for a chance to get the rationed amount.
Now in the twenty-first century America, the Snowflake college students are “triggered” by banana peels carelessly discarded on a tree. It makes one wonder, what is the progressive-approved non-racist method of disposing of banana peels after one eats a banana?
During the 1977 earthquake in Romania, the American Bible Society donated Bibles printed in Romanian which were meant to be distributed to the thousands of people who had lost their homes, their loved ones, and felt defeated. Biblical passages would have been inspirational and calming at such a time of profound grief. Instead of distributing them, Ceausescu’s regime recycled them into toilet paper. The print was so good or their recycling so bad that, one day, I found an entire roll of toilet paper with faint words, still legible, which turned out to be passages from the Bible. As scarce as toilet paper was, we kept it in the pantry because it was too sacrilegious to use it in this way.
As Americans, we never think how grateful we should be every day to the Scott Brothers of Watertown, Massachusetts, who invented the toilet paper in the 19th century!
Since people were embarrassed to buy it, the Scott Brothers thought they had a dud invention on their hands until they had the brilliant idea to give it freely to hotels. Hotels agreed to place it in rooms because they were fed up with their small pipes being clogged all the time. Until then, people used corn husks and newspapers which clogged the small sewer pipes. Customers loved the toilet paper for that very reason too and began buying it. And the rest is history.
In Romania’s outhouses, we used corn husks and communist party propaganda newspapers because we did not have Sears and Roebucks catalogs or any catalogs for that matter. Once in a while a German tourist would leave behind one of their catalogs and we enjoyed looking at the abundance of everything we did not have, so we never used those for toilet paper. We especially enjoyed wiping with pages which had the dear leader Ceausescu’s face on them.
Later on, when toilet paper was finally made, it was coarse light brown paper with wood chips still embedded in the paper, or, if white, it had faintly visible words on it from the books which were recycled into toilet paper.
I still have the few strips of pink toilet paper embedded with wood chips. I showed it to a lot of my former students but it did not seem to make any impact on brain-washed students who love communism and Che Guevara. Listening day and night to Hollywood and the academia extolling the wonderful virtues of communism, young people aspire to overturn their wonderful country built by capitalism and replace it with the tyrannical and egalitarian notion of communism. They believe this because they are young, idealist, often fat and well fed, restless for violent action, and never had to stand in line for anything except the latest electronic gadgets or concert tickets.