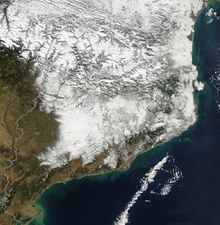 Catalonia satellite image March 8, 2010
Photo: Wikipedia
Catalonia is located on the eastern part of the Iberian Peninsula and has a population of 7.52 million people. Catalonia has a distinct history, culture, and language. Its main city, Barcelona, was captured in 1714 by the first Bourbon king of Spain, Felipe V, and Catalonia lost its autonomy. Catalonia’s national day, September 11, commemorates this event.
The regional Government of Catalonia decided that a referendum would take place on Catalan independence on October 1, 2017. But the Constitutional Court of Spain declared on September 6, 2017 that the referendum and its invocation violated the Constitution.
Spain is divided in 17 autonomous communities with government delegates who must follow the same Constitution and legislation. However, Catalonia has tried for a long time to become independent. A few Catalonian politicians believe that they have something important to gain if they separate from Spain. After all Catalonia contributes the lion’s share of taxes to poorer regions. Catalonia provides one fifth of Spain’s industrial output.

Catalonian pro-independence flag
Photo: Wikipedia
Few citizens actually voted to break away in the legal referendum which took place five years ago on the issue of separation from Spain. Most ordinary Spanish citizens do not seem to be at all interested in separation. The average Spanish citizen sees the conflict in Catalonia in their own light.
But the current president of Catalonia, in an unconstitutional move, decided to organize a new referendum on the issue of independence from Spain.
Prime Minister Mariano Rajoy and his government made a mistake in dealing with Catalonia and addressed the conflict by calling in the national police and the civilian guards which he sent to Catalonia to “establish law and order” and to prevent Catalonians from voting.
Naturally Catalonians were outraged by the police presence and overt force and decided to vote even though many were not initially convinced that it was a good idea or even useful to separate Catalonia from Spain. It was reported that 2.225 million Catalonians voted on Sunday out of a total 5.5 million citizens registered to vote.
The conflict escalated when the Spanish police prevented Catalonians from entering the improvised voting centers while the Catalan police (Mossos d’Esquadra) protected the voters.
Additionally, the Internet was cut in voting centers and the voting population could not be cross-checked and verified; anyone could vote as long as they wrote down their names and an I.D. number. In the ensuing chaos, people who were not residents of Catalonia got to vote and some voted five times.
Catalonia is a more industrialized part of Spain, however, in the event of separation of Catalonia from Spain, business owners threatened to move to other areas. If Catalonia becomes an independent state, it is no longer part of the European Union; it must mint its own currency, have a monetary policy, and force Spanish citizens to travel with a passport in their own country.
The problem for Spain is that the rail road and interstate which connects it to Europe runs through the Mediterranean coast, through Catalonia. In the northern part of Spain, in order to cross into France through the Pyrenees Mountains, people use a narrow highway that crosses through Andorra.
Some Spanish believe that the Catalonian president acted unconstitutionally and forced the central government to take radical and unpopular measures which allowed Catalonians to claim that their democratic right of self-determination was violated.
The public opinion is greatly divided and many Catalonian families are separated along political lines; family members in the same house do not speak to each other because they have different political and economic views on the matter.
Most argue that an independent Catalonia would not benefit either side; it is simply a manipulation of the masses by a few elites with personal agendas.
For several years now, schools have been teaching the Catalan language while the Spanish language classes have been reduced. In public administration, nobody is hired unless they speak Catalan – same situation for professors or doctors. Some Spanish believe that English would be more beneficial since Spain has a huge tourist industry.
Violence was not the answer, many Spanish citizens claim, but it was necessary for the central government to re-establish law and order. Voting in a referendum that has been declared illegal by the central government in Madrid and by the courts was also a bad idea.