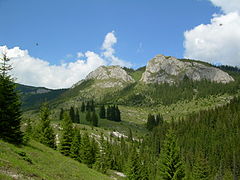 Apuseni Mountains Photo: Wikipedia
Gratitude and honor are remarkable character traits that I’ve always searched for in my fellow humans. Imagine my pleasant surprise when I found them in a millennial! It was not a millennial born and raised in this country but in Romania, in the beautiful Apuseni Mountains of western Transylvania. 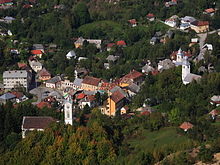 Photo: Rosia Montana, Wikipedia
In Rosia Montana, the county of Alba, Tica Darie, a 25-year old entrepreneur, saw locally produced merino wool and artisan knitting skills as a source of golden opportunity, fleeced from the flock of merino sheep and turned into socks, sweaters, scarves, and other accessories that the fashionably young and other customers could wear. The label is Made in Rosia Montana.
Rosia Montana is the same village that was embroiled in a bitter battle in 2013 between western developers who wanted to dynamite four mountains and flood the village and its waters with cyanide in order to extract the rich vines of gold, the miners who wanted such development, and the rest of the village who wanted to preserve their beautiful area, unspoiled by gold mining. The young entrepreneur, Tica Darie, was caught in the middle and suffered at times physical and verbal threats and the wrath of the miners.
Darie realized that people were being forced to sell their ancestral lands and, in some cases, expropriated from their homes by the government eager to cash in on the western gold development “bonanza.”
Darie felt compelled to help the locals who wanted to save their village. He ran marathons and participated in bike tours across Europe to Rosia Montana, in order to draw attention to the plight of the villagers. He even biked 2533 km from Copenhagen to Rosia Montana, carrying the Romanian flag.
Applying the skills he learned in Denmark in multi-media design, Darie made videos and developed sites for his own online store. Ever the optimist, the future looks bright for this young entrepreneur. He moved to Rosia Montana four years ago and, in the meantime became a father to a beautiful little girl and bought a property for his shop which he is going to restore.
“You have to become a responsible citizen, no matter where you live,” said Darie. There are now signs permanently attached to the front of homes stating, “This property is not for sale.” http://recorder.ro/antreprenoriatul-salveaza-rosia-montana/
In the battle between those seeking gold in the veins of the mountain and those who wanted to remain in their own beds and their own homes, surrounded by beautiful and pristine mountains, peace has settled over the poor village for now. When Darie becomes successful in his enterprise, fifty or more families will have a chance to make a living with dignity and suitable pay, not slave wages.
Rosia Montana has lost half of its population since the Revolution of 1989 when communism “fell.” There are ruins everywhere for sure, some from the communist era, others homes bought by the Gold Corporation and left to sink into the ground, and even houses abandoned by their former owners who were bought out and now these ruins are inhabited by rats. But there are homes left that are maintained with pride by their owners.
The entire village had been slated to become a decanting lake for the Gold Corporation. The gas station, post office, the bank, mobile phone office and few but scarce amenities are scattered here and there. Generations across centuries guarded their pastoral lifestyle with pride.
It is certainly not an easy place to start a business but the perennial optimist Darie is undaunted and hopes to succeed with Made in Rosia Montana for the sake of his adopted home. It will take a millennial with determination, gratitude and honor like Darie to make it happen. http://bit.ly/2z3P4bY

2 thoughts on “With Gratitude and Honor”