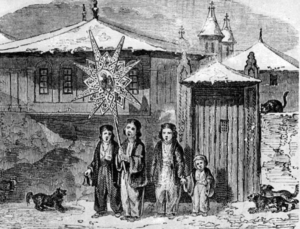 Christmas caroling in Romania, 1841 Photo: Wikipedia
Christmas was my Dad bringing home proudly a scraggly fir with sparse branches – fragrant with the smell of winter, tiny icicles hanging from the branches, miniature crystal daggers, melting on my mom’s well-scrubbed parquet floor. I never knew nor asked how he could afford it from his $70 a month salary that barely covered the communist subsidized rent, utilities, and food. No matter how bare the branches of my Christmas tree were, it was magical to me. 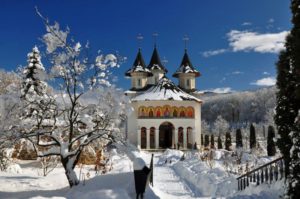 Sihastria Monastery, Photo: Lucian Ciobanu
Christmas was sneaking at midnight to the village Orthodox Church with aunt Leana, the singing deacon, lighting candles and praying, surrounding the building when the crowd overflowed its tiny confines into the yard and the cemetery. The cold chilled us to the bone but the inside eventually warmed from our bodies, the candles, and the excitement of prayers and closeness to God.