Driving through the winding roads of the Cumberland Valley, Pennsylvania felt like riding a roller-coaster sixty miles an hour, with exciting and breathtaking drops. It was a warm February day yet I could only imagine how treacherous it must be when ice and snow cover these roads.
I admired the picturesque apple orchards dotting the landscape and stopped to smell the fresh air, the soil, and to hear birds singing. Even in its dormant state, the sunny day, the stillness, the beauty of the fertile trees as far as the eyes could see, was captivating. 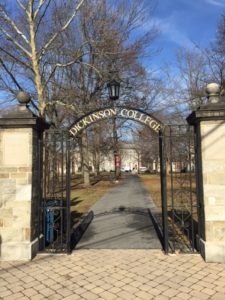 We were bound for Carlisle, Pa, the seat of Cumberland County. Carlisle has a population of 19,162 (2016) excluding the students who attend Dickinson College, a liberal arts college focusing on international education and global education.
Carlisle Barracks is one of the oldest U.S. Army installations and the most senior military educational institutions in the United States Army. The U. S. Army War College is also located on the grounds of Carlisle Barracks.
Cumberland County was crossed by major roads and had an important role in the westward migration. It is interesting to note that the historic district is constantly crossed and clogged by eighteen-wheeler trucks.

The settlement of Carlisle was planned in 1751 by John Armstrong Sr. Immigrants from Scotland and Ireland settled in Carlisle and farmed the Cumberland Valley. They named it after Carlisle, Cumberland, England, and even built the former jail house in the shape of The Citadel in the English city. This jail is now used as general government offices. 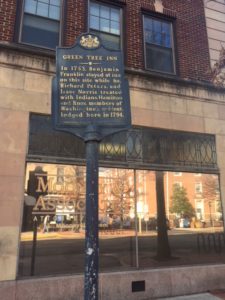 The Green Tree Inn had many distinguished guests, among them Benjamin Franklin in 1753, Hamilton and Knox, members of Washington’s cabinet in 1794.
James Wilson (1742-1798), born in Scotland, who rose to the rank of Brigadier General of the Pennsylvania State Militia, cast the deciding vote for independence for Pennsylvania, was one of the six original justices on the Supreme Court, and a founding father of Dickinson College. He was a signer of the Declaration of Independence, and was twice elected to the Continental Congress.
James Smith (1719-1806) was another signer of the Declaration of Independence. He was born in Ireland and studied law at his brother’s office in Pennsylvania. 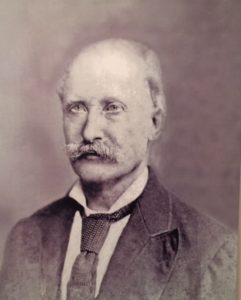 Another fascinating local was Daniel Drawbaugh, expert mechanic and inventor. He held seventy patents, thirty-five related to the telephone. He invented stone pneumatic drills that were used in the building of the Library of Congress, a coin sorting machine, and a charcoal stamping machine. His Great Cumberland County Clock was an interesting electrical invention that could not keep accurate time because of variations in ground current.
Carlisle made national news when the McClintock Riot took place in 1847. Pennsylvania was a free state but three fugitive slaves were captured and brought to Carlisle on their way south – a girl named Ann, a man named Lloyd Brown, and a woman named Hester Norman, married to a free man, George Norman of Carlisle.
At the time, 300 freed men and women lived in Carlisle. The owners of the three fugitive slaves, Kennedy and Hollingsworth, were seeking certificates from a local justice to transport the fugitive slaves south, and permission to keep them in the county jail while they conducted other business.
A crowd gathered at the courthouse and a riot ensued. The judge had reluctantly decided that the escapees could not be jailed but that the certificates of ownership were valid. Kennedy was trampled and broke his knee in the melee; he died of his injuries three weeks later. Thirty-four black and white people and Professor McClintock were charged with inciting a riot. Thirteen people were convicted and eventually imprisoned for this riot.

Iron furnaces existed in Cumberland County as self-sufficient plantation communities: farms, mills, workers’ homes, school, offices, church, cemetery, and a company store. The labor was composed of free laborers, indentured servants, some of whom were white, slaves, and apprentices. Women mended clothes, farmed, supplied wood, and finished iron casting. A 1800s ironworker made anywhere from 51 to 86 cents a day for 12 hours of work. Most people in this time period worked on farms or in farm-related fields such as milling, blacksmithing, and tanning.
According to the museum archives, due in part to the tanning and iron industries, slavery lingered in Cumberland County even though it was abolished in Pennsylvania on March 1, 1780, one of the first states to do so. “In 1810, half of all the slaves held in Pennsylvania were in Cumberland County… Twenty-four Africans were still in bondage in 1840; 1847 was the first year that the county no longer held slaves.”
The museum archives explain that “Cumberland County was not a stronghold for abolitionists. Many residents had family and friends in slaveholding Maryland, southern born soldiers were in training at the Cavalry School at Carlisle Barracks, and nearly half of Dickinson’s students were from the south. Newspapers in the area were anti-abolitionist and slave catcher gangs roamed the county. After 1945, local churches forbade abolitionist meetings in their establishments.” 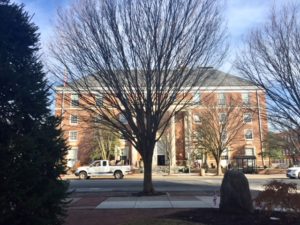 The new courthouse is located on the grounds of the former Market House Square. The Penn family, in their 1751 plan for Carlisle, had designated a portion of the square to be used as a market. Consequently, a market was held continuously on that spot from 1751 until 1952 when it was demolished to make way for the new courthouse, to the protests of many local conservationists.
Twice a week markets were held here and overseen by the Clerk of the Market who used scales to validate the weight of the goods and produce sold. Three different buildings were erected to hold these markets, two open-air ones and one elaborate Victorian building. 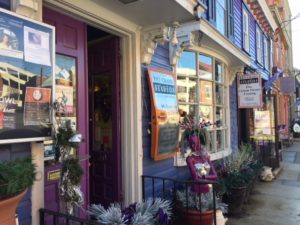 On a quaint side street in the historical district, dotted with whimsically bright and colorful mom and pop stores, one particular shop displays in a large bay window numerous “progressive” signs of PEACE and COEXIST just in case you missed one.
Throughout downtown businesses posted flyers announcing its 15th annual food dinner on March 31 sponsored by the Dickinson College, celebrating local agriculture, with a keynote speaker, a fourth generation grocer with a conscience and a political message. She runs “an all-local grocery, deli, and craft beer bar that exists specifically to make climate change progress through responsible sourcing practices, resource-conscious equipment, power and packaging decisions, and the realization of a no-food-waste mandate. This market empowers shoppers to make incremental progress at a time when large-scale legislative change seems unlikely.”
The food will be delicious and expensive ($30) but the dinner sounds like a political drive in support of the debunked man-made climate change scheme rather than just an opportunity to sample locally grown and prepared food and to meet other like-minded progressive neighbors.