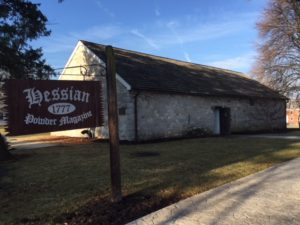 On the Carlisle Barracks grounds in Pennsylvania, a non-descript rectangular stone building was witness to so much of our early American history. The entrance is in the middle, a heavy and simple wooden door with rusted thick latches. It is now a self-guided museum which opens at daylight and closes at sun-down. It was captivating to step inside and to visit alone the former prison cells and powder storage magazine, now a museum which describes the rich history that surrounds the area.
The Carlisle post was purchased by the federal government in 1801 from the heirs of William Penn for $662.20. The property had been rented previously. 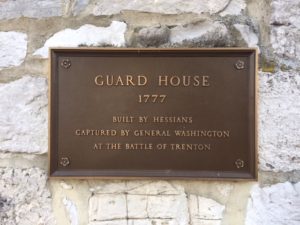 In 1803 Meriwether Lewis was helped by eight recruits from the Carlisle Barracks in his preparation to explore the Missouri River. These recruits were sent by Lieutenant Colonel Thomas Cushing to help transport supplies and a keelboat from Pittsburgh to St. Louis. When the job was done, the recruits traveled down the Mississippi River and reported to Fort Adams, MS.
After a big fire destroyed most of the buildings in 1806, the post was rebuilt as a recruit depot. Even the Navy was authorized to use it. In 1828, the post began training cavalry troops. By 1846, the Carlisle Barracks became the principal cavalry and light artillery training depot for the U.S. Army.

Cavalry School brothers were split and had to take sides as the war broke out between North and South. Few thought that Confederate soldiers would venture out this far north. But they did. In June of 1863 Gen. Robert E. Lee’s Confederate Army moved north into Maryland and Pennsylvania, moving along the Cumberland Valley towards Harrisburg, Pa.
Interestingly, a former soldier who served in 1840 at the Carlisle Barracks, Lt. Richard S. Ewell, 1st Dragoons, returned to Carlisle in 1863 as Confederate Lieutenant General where he headquartered and staged the area for an attack on Harrisburg. But Gen. Lee ordered him to rendezvous south of South Mountain and he left Carlisle on June 30, 1863.
Carlisle Barracks was almost burned to the ground by the shelling of Maj. Gen. J.E.B. Stuart and his Confederate cavalry when U.S. Brigadier General William E. Smith division, who was in possession of Carlisle, refused to surrender. One hundred and thirty-four rounds of ammunition also destroyed the city’s gas works (July 1, 1863). 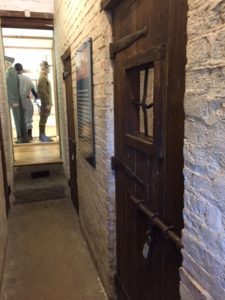 2 thoughts on “The Hessian Powder Magazine”