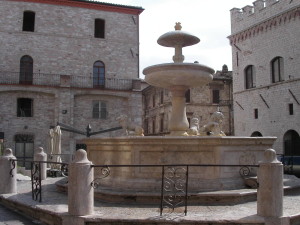 Assisi Fountain
(Photo: Ileana Johnson 2008)
Extremely curious at the media allegation that the “scientific Pantheist who advises Pope Francis” and has swayed “Laudato Si” (named so after St. Francis of Assisi’s canticle), “seems to believe in Gaia, but not in God,” I set out to read for myself the climate change encyclical in Italian. END_OF_DOCUMENT_TOKEN_TO_BE_REPLACED

“Why would they [illegal immigrants] vote for a party that is going to cut taxes they do not pay, but take away government benefits they do receive?” Patrick J. Buchanan

As the country is reeling from the electoral loss and the re-election of President Obama, half rejoicing and the other half in stunned disbelief, the economic reality is beginning to sink in.
People chose the promise of Santa Claus and Christmas every day of the year. Government Santa is likely to slow down in delivering unearned freebies as the economy worsens.

The Dow Industrials reacted immediately to the re-election by dropping more than 300 points. All other indexes also dropped more than 2 percent the next day. The finance and energy sectors will be the hardest hit by the promised increased regulation.
END_OF_DOCUMENT_TOKEN_TO_BE_REPLACED