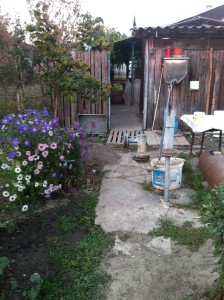 A lot of Americans take water for granted because it is relatively cheap and readily available in most areas. They count on turning on the water spigot and the water flows. They also take for granted their water heaters – few people had to do without hot water in recent memory. Perhaps those who were the victims of tornadoes and hurricanes can better understand having to do without water, hot water, heat, and electricity for days and weeks at a time.

If you ask any Americans like me who grew up under communism and deprivation, we know what it’s like to go the entire summer, every summer, without any hot water and scheduled cold water because that is when the communist leadership decided that it was the best time to clean the cisterns of mineral deposits. At least that is what they told us. We had a few hours of hot water during winter time, 5-7 a.m. and 5-7 p.m. Cold water was also regulated in summer time. During the day, when everyone was assumed to be at work or school, there was no cold water for eight hours. I am not sure they did it out of incompetence, spite, or to make us as miserable as possible.

Anemic heat was delivered by steam heaters. The fact that we lived on the fifth floor of a decrepit high-density concrete apartment did not help with the heat. By the time the steam got to our level, it was approaching lukewarm. As a child, I would put my hands on the coils to warm my frozen hands. Once in a while, it was hot enough and we would hang clothes to dry over the radiator coils.

The gas oven would help warm the kitchen and we utilized the top stove to boil water to do dishes or bathe in the tub. At least we had a tub. The country folks had it much worse; they got their water from a well, using a chain and bucket to hoist water out. Villages in flat areas could afford iron hand-cranked water pumps; they did not have to dig through rock, making wells more affordable and water easier to find.

I have walked as far as two miles one way to bring back two buckets of water at a time for drinking, cooking, and to flush the commode. Do Americans believe that these are scenarios out of a Depression area movie? Of course, they’ve lived in abundance and luxury their entire lives. Is that likely to change? I am most certainly sure that it is and it will.

Bring in the liberals with their control agenda; water is already tightly controlled in some areas and it will continue to be more restrictive to use, and more expensive. The EPA controlling rain water, Executive Order 13603 of March 16, 2012 giving the Department of Defense control over all of our water resources in both peace and war time, Agenda 21’s public-private partnerships to control rivers and water supplies, watersheds, blowing up dams, denying irrigation water to vegetable and fruit producing farmers in San Joaquin Valley in California represent major efforts to alter Americans’ “wasteful and evil capitalist” lifestyle, de-developing U.S. to the level of third world nations.

“A massive campaign must be launched to de-develop the United States. De-development means bringing our economic system into line with the realities of ecology and the world resource situation.” (Paul Ehrlich, Professor of Population Studies)

Was water really in short supply or undeliverable in the communist “paradise” I had to endure for 20 years? No, it was not about water shortage, it was about power and control over our ability to drink, to cook, to bathe, to wash our clothes, to flush our commodes, it was an attempt to make us so miserable and submissive to their will that when we did get water, we were grateful to our benevolent masters and controllers.