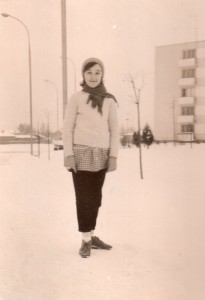 It was bitter cold last night. Tiny snowflakes started to fall in the afternoon, turning lawns into a fantastic winter wonderland. Snow began to accumulate like a soft immaculate blanket. Then the hawk came and started blowing the soft dry snow into swirls of wind, howling past the windows, biting and stinging cheeks with the pricking sensation of needles. The wind chill was below 10 degrees Fahrenheit.

The ghostly whiteness cast an illuminating glow inside the house all night. Trees were claiming their stake of the pristine snow-covered ground with intense shadows. The moon was a hanging globe of shiny silvery yellow.

The sunrise made the snow sparkle with an orange glow peppered with crystal rhinestones. It was an invigorating and frost-biting sun.

When my hubby shoveled the drive way, the scraping of the plastic against the asphalt reverberated in the quiet stillness of the street. An occasional stronger gust of wind would temporarily blind him with a snow shower from the tree tops. The tall oaks were creaking with frozen stiffness.

I had left a six inch deep frying pan on the deck last night and it was now covered completely by snow. I could have used a ruler instead but it was more fun this way.

The roads were deserted in spite of the school closures. Nobody went to work except my husband. No kids were outside playing in the snow or sledding down the many hills in the neighborhood. No laughter of kids chasing each other in snowball fights or building snowmen. Homes were shuttered like tombs.

Even the animals were hiding in the woods. There were no deer hoof prints or fox paws in the fresh fallen snow. A silent black bird with white throat was taking a snow bath on the lamp post. The non-hibernating squirrels were hiding in their nests; the ground was way too cold and frozen to dig for nuts between the evergreens.

Are the kids sleeping late or huddled in front of television or computer screens? Are they frightened by the cold, afraid to play outside because they might hurt themselves?

We used to play outside all day in bitter cold winters, oblivious to frigid cold, wetness, and slosh around us or the adult discomfort and misery. Parents had to walk to work, slipping often on the thick ice. We took tumbles like rubber figurines, getting up with a roaring laughter each time, rubbing the painful part.

Bundled up to the eyeballs in layers, with pajamas next to the skin, kids were stuffed like Michelin Men. We skated and sledded until dark, sometimes hitching rides on the tail bumper of slow moving cars. There were no regulators around to tell us that we might die. When the lights came on, we knew it was time to go home. Our clothes were so wet and frozen, it took a little while to peel off all the layers, like a tight onion.

Some dads pulled their children on sleighs on Sundays, trudging through snow and ice like dutiful oxen to make their bundled kids happy. We tobogganed down a steep hill nearby, climbing it with a flexible flyer in tow over and over until our cheeks were rosy and our running noses red from the blustery wind.

On our way to school, sometimes we were secluded from view and wind by snow drifts on both sides – it looked like we were walking through crystal tunnels, occasionally splashed by passing busses. Often the two mile walk back and forth to school was very cold and painful when we slipped on ice or the wind picked up, we were buffeted so hard that the snow felt like little ice daggers cutting our faces with the discomfort of paper cuts – pain by a thousand miniature icicles.

There was a nice ski resort called Sinaia, not far from my hometown – it was “reserved” for foreign vacationers who paid in dollars and the communist elites who had villas in the area and could afford to buy the equipment, pay for lessons, and ride the ski lift to the top. The skating rinks were reserved for the elites as well – ice skates and boots were very expensive.

Our fun winters from long ago are now called polar vortex by the very wise and omniscient climate change discoverers.

I drove to Sinaia last year and visited the lodging base area where more hotels have been built since the temporary “fall” of communism. Now that capitalism in America has given me the opportunity to afford to fly to a ski resort, stay in a ski lodge, buy equipment or rent it, ride the lift to the top, my knees are not so cooperative.