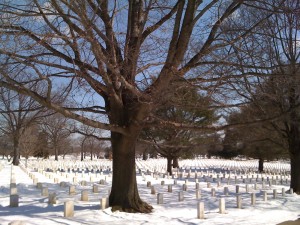 There was a quiet and peaceful stillness about the cemetery this January day. It was snowing heavily and the pristine white was accumulating between thousands of rows of headstones marking the graves of our true heroes who gave their lives in battle or died in old age, having served our country for decades, fighting enemies to preserve our freedom.

A very old general was being buried that day and the Honor Guard and the ceremonial horses were barely visible in the heavy snow. I could hear the cadence of the steps and the horse hooves beating rhythmically against the asphalt.

The next day the sun shone over a blustery day, over graves covered in powdery crystalline snow – a pristine whiteness blanketing the peaceful eternity.

Arlington National Cemetery is always quiet it seems, in spite of its proximity to a very busy interstate, Fort Myers, and the Pentagon. A brick fence surrounds the cemetery, delineating its boundaries. In May this year, the final resting place of hundreds of thousands of Americans who served since the Revolutionary War, will be 150 years old.

Union Army Private William Henry Christman of Pennsylvania, was the first military burial at Arlington. Since then, over 250,000 military personnel and some spouses had been interred in the national cemetery, the land of the former 1,100 acres Arlington House estate.

When the Civil War erupted, Mary Anna Randolph Custis Lee, great-granddaughter of Martha Washington, owned the estate and lived there with her husband Robert E. Lee. Built in 1802, the Arlington House was certainly not intended to be a national cemetery.

When Mrs. Lee did not pay estate taxes, the federal government confiscated the property and sold it at public auction on January 11, 1864; it was purchased by a tax commissioner “for government use, for war, military, charitable and educational purposes.” On June 15, 1864, Arlington was officially designated as a national cemetery by Quartermaster General Montgomery C. Meigs.

The eldest son of General and Mrs. Lee, Custis Lee, filed a lawsuit as the legal owner of the property, on grounds that the land had been illegally confiscated and, in December 1882, the Supreme Court ruled 5-4 in his favor. The property was returned to Custis Lee because it was confiscated without due process. Congress then bought the property from Lee for $150,000. The National Park Service administers and maintains the grounds and Arlington House (Custis-Lee Mansion).

Arlington National Cemetery pays tribute to our heroes, men and women of honor, who have served our nation, and have made the ultimate sacrifice by giving their lives for our freedom. The 624 acre cemetery is landscaped and shaded by 8,500 exotic and native trees. Volunteers place wreaths and American flags on each grave on Veteran’s Day and at Christmas time.

On March 4, 1921, Congress approved the burial of an unidentified American soldier from World War I in the white marble tomb sarcophagus of the Tomb of the Unknown Soldier. To the west, three graves with white marble slabs flush with the ground are crypts of the unknown soldiers from World War II, Korea, and Vietnam. The sarcophagus which shows some tiny cracks of time is adorned by the words etched in marble, “Here rests in honored glory an American soldier known but to God.”

The crypt of the unknown Vietnam soldier was left empty since 1998 when mitochondrial DNA tests revealed that the body exhumed on May 14, 1998 was that of Air Force 1st Lt. Michael Joseph Blassie, who was shot down near An Loc, Vietnam, in 1972.

In section 26 of the cemetery, there are 2,111 Civil War Unknowns buried together.

Among the 31 Monuments and Memorials, there are hundreds of group burials. These were not unknown soldiers, they have died together and their families chose group burials. Most noted are the 18 sailors who died aboard the aircraft carrier, USS Forrestal on July 29, 1967 and the largest group, the 250 men from the USS Serpens, interred in 52 caskets. Their U.S. Coast Guard ammunition ship exploded and sank in Guadalcanal, Solomon Islands, on January 29, 1945.

The eight men who died in April 1980 in Iran in an attempt to rescue 53 American hostages from Teheran are buried together across from the Memorial Amphitheater. The 184 victims of the September 11, 2001 attack on the Pentagon are buried together in the 9-11 Memorial in Section 64. Five families did not receive any recovered remains of their loved ones. The five-sided granite marker lists the names of those who died at the Pentagon and on the American Airlines Flight 77.

The 3rd U.S. Infantry Regiment is the oldest active-duty infantry unit, dubbed the Old Guard, and has been serving the nation since 1784. Among its many duties, The Old Guard maintains a 24-hour vigil at the Tomb of the Unknown Soldier.

The Changing of the Guard at the Tomb of the Unknown Soldier is a ceremony to behold. The sentinel guarding the tomb rain, snow, or shine in impeccable uniform, is changed every hour with pomp and circumstance, white glove check of the weapon, and elaborate 21 steps marches and 21 seconds pauses to cardinal points in remembrance of the 21-gun salute. After saluting the tomb with its unknown recipients of the Medal of Honor, the sentinel takes his place on a black mat.

Arlington National Cemetery is an essential part of our American history. We honor the heroes interred there in the last 150 years, men and women who have given their service and lives to our country, making the ultimate sacrifice for freedom.