Sonny, the yellow lab, and Lucky, the Red Shouldered Hawk’s lives crossed on a cold snowy day in Virginia when Sonny sensed something was terribly wrong with the beautiful raptor perched on the fence for hours. http://canadafreepress.com/index.php/article/59853

Injured, with his wings clipped or possibly dragged by a car, the hawk could not fly away. He’s been sitting on his fence perch for hours, just moving his head, unperturbed by the dog’s furious and relentless barks. Sonny seldom barked so that drew the attention of his owner, Scott Lingamfelter, who sent his son Paul to check out the source of Sonny’s commotion. 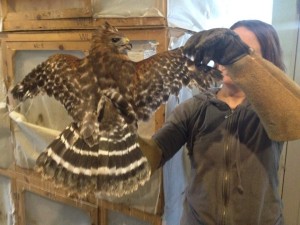 Red Shouldered Hawks nest in deciduous woodlands with tall trees and a good source of water, near rivers and swamps. Hunters of mice, frogs, and snakes, their “kee-rah” whistle makes a distinctive sound in the forest. Their stick nests can be seen in the main crotch of a large tree. When migrating, the Red Shouldered hawks fly high overhead along ridges and the coast.

Scott Lingamfelter, Sonny’s owner, posted today an update on the fate of the Red Shouldered Hawk who had been picked up by the Raptor Conservancy of Virginia in Falls Church for evaluation and possible rehabilitation.

Kent Knowles of Raptor Conservancy of Virginia reported that the hawk is doing as well as it can be expected. He is “self-feeding and slowly regaining weight.” When the weather warms up, RCV will release some birds from flight cages, birds that have completed rehab, and are now ready to fly on their own in the wild. There will be room, and Sonny’s hawk, Lucky, will be moved into a flight cage.

After the hawk completes a successful molt in August, his condition will be reassessed. The wildlife caretakers are not sure Lucky will be able to complete a molt. Sonny’s hawk may need more recovery time since “most of his flight feathers on both wings were torn at the halfway point, and the raptor is considered non-flighted.”

Without Sonny’s “bark-a-thon” that cold December day, the dehydrated and hungry hawk would not be alive today. Scott Lingamfelter named the hawk Lucky. He did not have nine lives that day but Sonny’s canine instinct that alerted human help, gave him another chance at life. Nobody would have known the terrible condition the raptor was in. 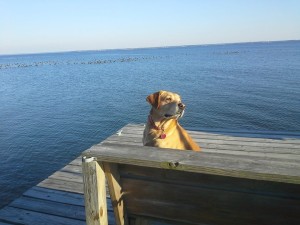