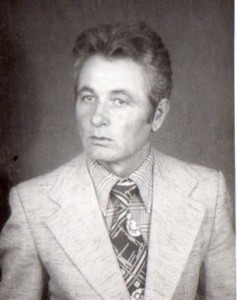 My Dad shortly before his untimely death in 1989

Today marks a quarter of a century since the passing of my Dad before his time. He did not die a natural death, it was an agonizing 30 days of deliberate starvation in the hospital and lack of medical care, lingering and clinging to life after one last beating by communist goons. They cracked his skull when they threw him in a pit of metal lathe shavings from a refinery’s scaffolding. It was not the first time he had been beaten for various reasons, but this time it was most cruel. The metal shavings caused tiny bleeding cuts all over his body as well.

Dad was a very honest man and hated all the theft and stealing that took place around him every day. He would not take one piece of anything from his job even if it was thrown in the trash. Everybody worked for the government for the same inadequate and “equal” salary. People stole from their jobs and traded (bartered) with other workers who also took materials or finished goods from their workplace in order to survive. Dad reported often such theft and the culprits would take their revenge when Dad least expected. Other times orders came from on high to teach him another lesson for having raised a child like me who chose to live in the freedom of capitalist America at that time over the exploitation and tyranny of communism. He never hid his anti-communist feelings and steadfastly refused to become a member of the Communist Party.

He was 61 years old and preparing to fly with exuberant anticipation to the United States to see his only child receive her doctoral diploma on May 13, 1989. In his excitement, he had packed a suitcase since January when the dreaded Securitatea (security police) notified him by phone that he had been cleared and a passport was forthcoming. Little did he know that even then, his passport and permission could still be revoked, which they did. He wrote and called a few times, at great expense, to ask me what to pack and what I wanted as a graduation gift.

I just wanted my Dad. I had not seen him in four years. Every time he applied for a passport, the communist handlers told him NO with impunity, calling him downtown to the precinct just to harass him. He had no fame or fortune, just enough money saved in the bank account for his burial. The commies had already confiscated everything when my mom defected to the United States after a three month visit. They punished him for her staying behind in the free America of 1980. For nine years we tried to bring him as well with no success. The communists left him with the clothes on his back and the rented, sparsely decorated, and tiny concrete block apartment on the fifth floor of Block A6 in which I spent part of my childhood. He had just retired and had received two months’ worth of his meager pay for which he had worked since he was 18 years old, 43 years of hard manual labor.

A phone call from my uncle shattered my happiness. I did not want to go to graduation anymore. I worked so hard for the degree but, at that moment, I only cared about my ailing dad. He clung to life for almost 30 days, spoon-fed water and clear soup by his sister Marcela, an angel sent from above. The hospital did not do much to ease his pain or make him better; they just gave him a terminal diagnosis and a bed in the ward where he spent his last days in a conscious but unable to speak much state. He shrank to 80 pounds in 30 days.
Such was the socialist medical care – rationed care for the masses and the best treatment and access for the communist elites. Dad needed a CT scan to save his life and state of the art medical care and drugs. There was only one CT scan machine available in the Communist Party hospital to which my Dad was not allowed access. He expired 30 days later, holding in his hand a wrinkled Easter Sunday photograph of me with his two granddaughters.

In physical therapy at the time, unable to travel 8,000 miles by plane to the hospital and to the funeral, I was devastated. The president of the university convinced me to at least attend Commencement Exercises. I reluctantly agreed only because my Dad would have wanted me to go and see my efforts through to the end. Our President at the time, George Bush Sr. was going to hand out doctoral diplomas and shake my hand. He subsequently wrote to me a very lovely and caring letter of encouragement.

I pinned on my mortar board the phrase, “4 DAD,” in big, bold letters, and dedicated my degree to him. I would have never made it there had it not been for his loving care and encouragement to strive to be the best during my 18 years of growing up in our modest abode. I think Dad was so proud, smiling from Heaven, and I felt his presence beside me. It was a beautiful and hot sunny day, not a cloud in the sky when I accepted my diploma with shaking hands and tears streaming down my cheeks.

I hope my Dad’s passing 25 years ago on May 12, 1989, a victim of Ceausescu’s totalitarian and brutal regime, and the death of 100 million other innocents who died at the hands of Bolsheviks, Stalinists, Maoists, Castroists, and other Marxist dictators, will serve as a wake-up call for all the misguided and misinformed Americans who believe the lies that communism is the answer to undeserved redistribution of wealth, non-existent “social justice,” and “equality” by government fiat.