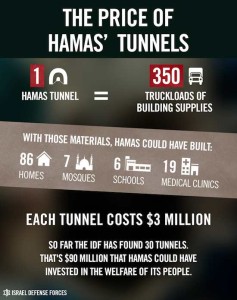 Photo: Israeli Defense Forces
Rational and objective human beings ask themselves many questions, research non-revisionist history, interview survivors of wars, or search authentic and official documents before they form an opinion or take sides. Liberal progressives seem to view the world, knowledge, and revisionist history through the tinted glasses of government doctrine promoted by the main stream media.

Denis MacEoin calls the western pro-Hamas supporters the new Romantics. They chanted by the thousands in London recently in support of this terrorist organization, in support of the “myth of Islam as the path to peace.” http://israelseen.com/2014/08/16/denis-maceoin-the-new-romantics-being-fair-to-terrorist-groups/

Thousands of deranged individuals harboring anti-Semitic hatred were demonstrating against Israel and chanting, “Hamas, Hamas, Jews to the Gas.” What history have they studied in school?

People have forgotten or deny what happened to 6 million Jews, gypsies, homosexuals, the handicapped, the not-so-perfect humans who were dehumanized, maligned, cartooned, mistreated, tortured, gassed, burned, and buried in mass graves while the world witnessed the atrocities from afar, turning a blind eye. The music got louder in homes and churches to drown out the wailing from the passing cattle trains filled to capacity with suffering humans.

The Office of the Historian at the U.S. Department of State describes the establishment of the State of Israel on May 14, 1948, recognized by President Harry S. Truman on the same day.

“Although the United States supported the Balfour Declaration of 1917, which favored the establishment of a Jewish national home in Palestine, President Franklin D. Roosevelt had assured the Arabs in 1945 that the United States would not intervene without consulting both the Jews and the Arabs in that region. The British, who held a colonial mandate for Palestine until May 1948, opposed both the creation of a Jewish state and an Arab state in Palestine as well as unlimited immigration of Jewish refugees to the region.” https://history.state.gov/milestones/1945-1952/creation-israel

The Twelve Tribes of Israel founded the first constitutional monarchy in Palestine around 1000 B.C. King David made Jerusalem the nation’s capital. Jewish independence lasted 212 years then it was split into two separate kingdoms.

Linguistically, “Palestine” is thought to have derived from Philistines, an Aegean people who settled around the Mediterranean coast in the area known today as Israel and the Gaza strip. The Arabic word “Filastin” is believed to have derived from the Latin name. The Romans applied the name “Palaestina” to Judea, the southern portion of today’s West Bank, in the second century after crushing the last Jewish revolt in an “attempt to minimize the Jewish identification with the land of Israel.”

The Jewish people did not just disappear in the year 70 A.D. after the destruction of the Second Temple and reappeared in the 20th century demanding their lands back. They have kept strong connections to their homeland for 3,700 years, a national language, and a distinct civilization. Jewish life and presence continued and flourished even after the destruction of the temple in the form of communities in Jerusalem and Tiberias through the 9th century and in the 11th century in Rafah, Gaza, Ashkelon, Jaffa, and Caesarea.

For centuries, in spite of the fact that Jewish people were forced off their lands or massacred, rabbis and Jewish pilgrims immigrated to Jerusalem and the Galilee and established communities in Safed and Jerusalem for hundreds of years. By 19th century more than 10,000 Jews lived throughout what is considered Israel of today.

“When Jews began to immigrate to Palestine in large numbers in 1882, fewer than 250,000 Arabs lived there, and the majority of them had arrived in recent decades. Palestine was never an exclusively Arab country, although Arabic gradually became the language of most the population after the Muslim invasions of the seventh century. No independent Arab or Palestinian state ever existed in Palestine. When the distinguished Arab-American historian, Princeton University Prof. Philip Hitti, testified against partition before the Anglo-American Committee in 1946, he said: “There is no such thing as ‘Palestine’ in history, absolutely not.” In fact, Palestine is never explicitly mentioned in the Koran, rather it is called “the holy land” (al-Arad al-Muqaddash).”
http://www.jewishvirtuallibrary.org/jsource/History/The_Jewish_Claim_To_The_Land_Of_Israel.html

Palestinian Arabs did not view themselves as a separate identity. The first Congress of Muslim-Christian Association which met in February 1919 to elect a Palestinian representative for the Paris Peace Conference adopted this resolution:
“We consider Palestine as part of Arab Syria, as it has never been separated from it at any time. We are connected with it by national, religious, linguistic, natural, economic and geographical bonds.”

Auni Bey Abdul-Hadi, a local Arab leader told the Peel Commission in 1937, which suggested the partition of Palestine: “There is no such country [as Palestine]! ‘Palestine’ is a term the Zionists invented! There is no Palestine in the Bible. Our country was for century’s part of Syria.” https://www.jewishvirtuallibrary.org/jsource/History/peel.html
Who were the Zionists and what is Zionism? It is a nationalist movement that promoted the formation of a Jewish homeland. Theodor Herzl is believed to be the founder of the Zionist movement in his 1896 book, Der Judenstaat in which he envisioned the formation of a Jewish state. The common denominator of Zionists is thought to be the claim to Eretz Israel as the national homeland of the Jewish people.
Zionists defend their national liberation movement for the repatriation of a dispersed socio-religious group. Its members have been forcibly converted, exiled, oppressed, forced into generations of Diaspora, and invaded and occupied by the Ottoman Empire in Judea and Samaria.
Anti-Zionists criticize Zionism as a “colonialist and racist ideology” that caused the denial of rights and expulsion of the “indigenous population of Palestine.”
There are many myths circulating among anti-Semites who cover their hatred with the phrase, “We respect Judaism but are against Zionism.” One such myth is that “Israel discriminates against its Arab citizens.” That is hardly the case when, in a population of 6.7 million, 1.1 million are Muslims, 130,000 are Christians, and 100,000 are Druze. Arab women can vote and Arabs hold 14 seats in the Knesset, the unicameral lawmaking body in Israel. http://www.americanthinker.com/2012/02/there_was_never_a_country_called_palestine.html
There is the myth that “Jews are building settlements on Palestinian land.” There is no Palestinian land, and the statement, “Palestine, the country, goes back through most of recorded history” is convenient propaganda. Yashiko Sagamori asked very pertinent questions to elucidate the mystery of this non-existent country, and I added a few of my own:
– When and by whom was Palestine founded as a country?
– What were its borders, capital, official language, and major cities?
– What were its economy, major industries, and GDP?
– What was its form of government and leaders prior to Arafat and his PLO?
– What was the name of its currency and exchange rate against other currencies?
– With whom did it engage in international trade?
– What were its famous places, museums, universities, operas?
– Who were its famous scholars and inventors, painters, sculptors, musicians, architects, engineers?
– Since Palestine no longer exists, presumably because of the Jews, what caused its demise and when exactly did it occur?
If you look at a map of Israel, it is a tiny nation surrounded by vast Arab lands, Saudi Arabia, Yemen, Jordan, Iraq, Syria, Turkey, Afghanistan, Egypt, Libya, etc. Sagamori wonders “if the people you mistakenly call ‘Palestinians’ are anything but generic Arabs collected from all over—or thrown out of –the Arab world, if they really have a genuine ethnic identity that gives them right for self-determination, why did they never try to become independent until Arabs suffered their devastating defeat in the Six Day War?”
Jerrold L. Sobel eloquently destroys the myth that “The Palestinian Authority protects Jewish holy sites.” “Forget about protecting these sites – in textbooks, speech, and daily life, the Palestinians and their supporters absurdly deny any Jewish connection at all to these ancient landmarks.” (Jerrold L. Sobel, There Was Never a Country Called Palestine, February 12, 2012)
While the western world is donating billions each year to help build a prosperous society on the Gaza strip, develop an economy, and elevate citizens from poverty, Hamas has been busy over the last four years building very expensive and intricate tunnels, an underground city in which bizarre weddings take place side by side with military operations aimed at ultimately destroying Israel and wiping it off the face of the earth.
Israel Defense Forces (IDF) found 30 such tunnels. Their construction was estimated at $3 million each. Hamas could have invested in the people of Gaza. For each tunnel, it could have built 86 homes, 7 mosques, 6 schools, and 19 medical clinics. Instead it invested in terrorism.
http://www.idfblog.com/blog/2014/07/26/price-hamas-underground-terror-network/